Tetris, but with a tub. 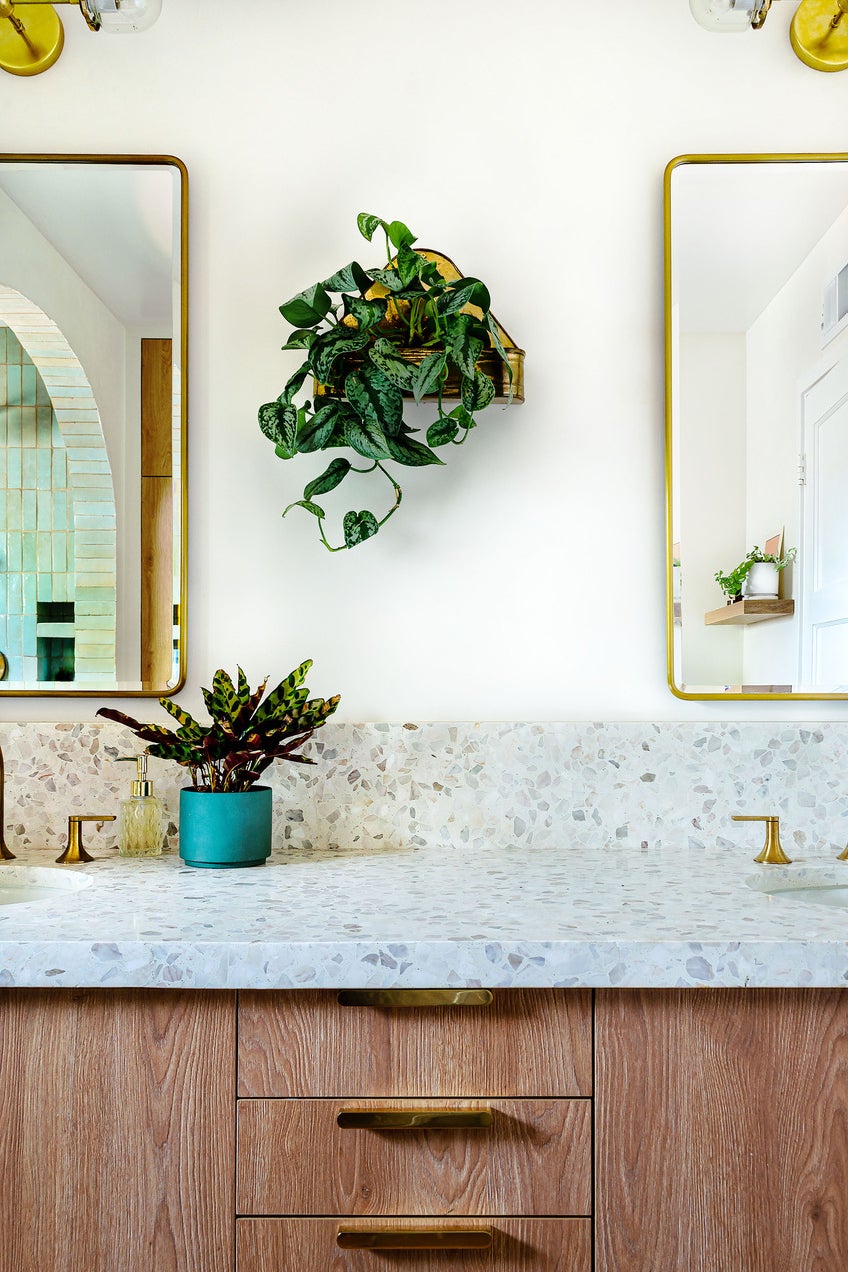 Designer Jessica D’Itri Marés of Renovate 108 and her client, actor Julianna Guill, have the same decision-making process. “We need to see all the options before we make the right choice,” says Marés. So when it came to updating the bathroom in Guill’s 1949 ranch-style home, Marés whipped up 15 different layouts with the goal of maximizing the 88-square-foot space, which Guill shares with her husband, Ben, and their two small children.

At the start, Marés realized that the existing bathroom was a mishmash of bad measurements. The tub was too shallow for an adult to soak comfortably, and while the vanity was long, it only boasted one sink. Cue the renderings.

In most of her mock-ups, Marés toyed with a separate tub-shower plan. In one iteration, she showed how the two could be aligned on the same wall (similar to the original setup), while in another, the designer placed them perpendicular to each other, with the shower situated directly across from the vanity. She even pivoted to a wet room arrangement, where they could squeeze a freestanding tub in a massive shower zone.

Still, the pair realized it was missing that wow factor. “Julianna really wanted it to hit you, visually, right when you walk in,” says Marés. By borrowing a tiny bit of real estate from the hallway (around 7 square feet) and tucking the tub and shower into an alcove of its own on the shortest wall, Marés finally found a way to give Guill the visual intrigue she was after. Bonus: This option opens up the room so that she and her husband can hang out on the floor while their little ones play in the bath. “It is this magical hideout that’s separate from the rest of the bathroom,” says Guill.

The less obvious upside of an arched shower-tub nook is that the curvature cleverly disguises the suspension shower rod and built-in shelves, one of which is perfectly sized for shampoo bottles, the other for a bar of soap. For the subcontractors, it also marked a clear spot where drywall and paint ends and tile begins. “There are no strange transitions,” notes Marés.

To pack the desired punch, they splurged on 2-by-6 blue-green zellige tile from Zia that rings in around $17 per square foot. “We went above and beyond by tiling the front of the tub as well,” adds the designer. It wasn’t all a walk in the park, though: Marés accidentally typed 57 square feet instead of 157 in her initial order, so they had to put off the tiling job for longer than expected as they awaited the full batch. The silver lining to the mini disaster was adding the stained-glass window, a wedding gift from Guill’s parents.

Double sinks were a must in the new space, so Marés accounted for a 90-inch-long vanity where the old tub used to be. To stay on budget, the designer opted for IKEA frames but clad them with Semihandmade’s Tahoe fronts. “A medium-tone wood is never going to look super-trendy, but it’s also never going to be super-dated,” say the designer of their choice to forgo popular oak doors. Marés delivered even more storage for the family of four with discreet medicine cabinets from Pottery Barn. “There are just certain things you want standing up like hair spray and toothpaste,” she says.

The kids’ toys that used to dot the tub’s edge now live in the flush linen closet. It’s the little things like being able to tuck rubber ducks behind closed doors that make a shared family bathroom work for everyone. “Now Mom or Dad can go in there and relax,” says Marés.