While a smart marble decision spared the budget. 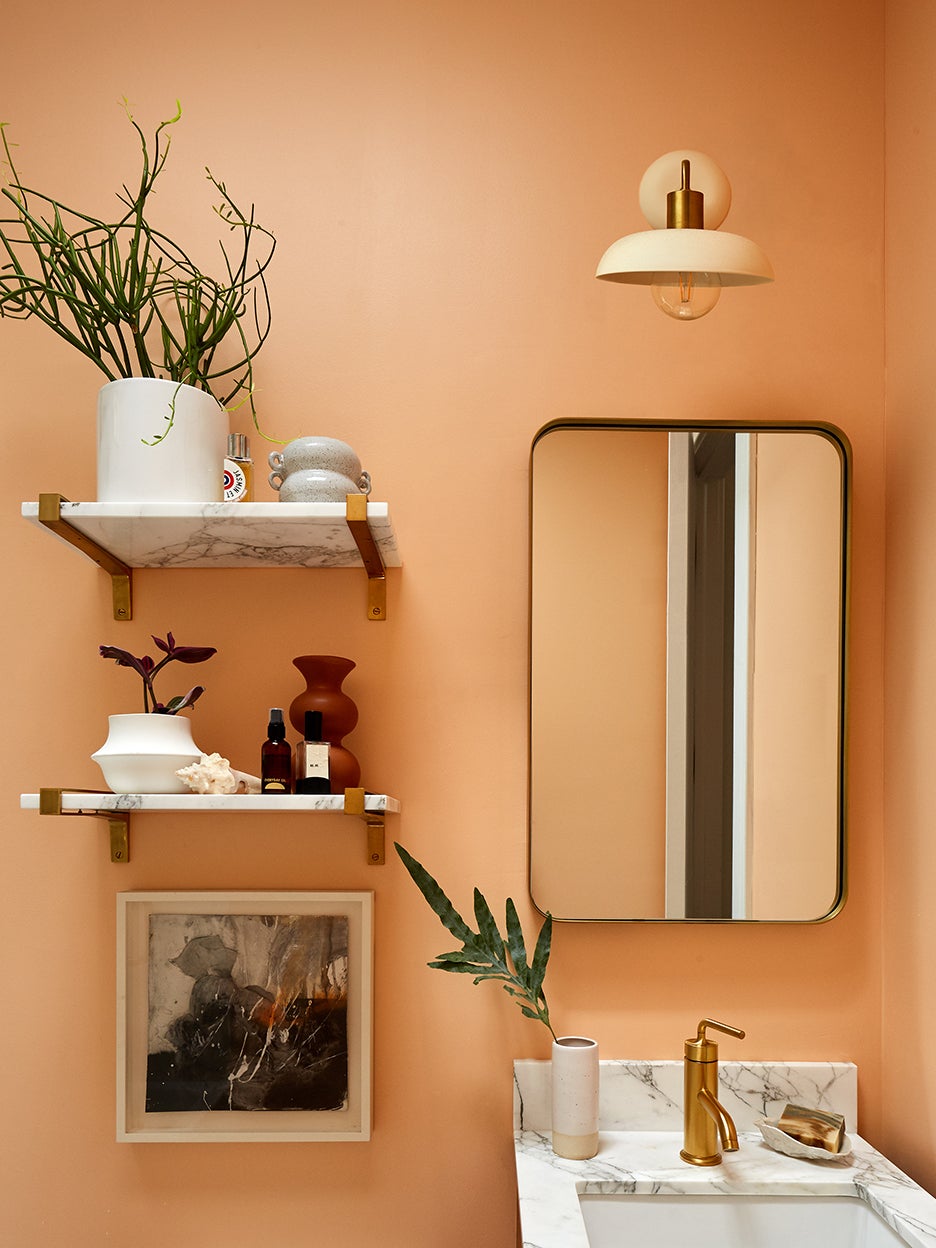 The slate floors, glossy white vanity, and rectangular porcelain wall tiles in Brooklyn-based fashion designer Carly Cushnie’s guest bathroom were what designer Michelle Zacks likes to call the “developer’s special.” “It was totally fine,” recalls Zacks. “But it was a lot of grays.” Cushnie and her husband, Oscar, tasked the interiors pro with reimagining the tiny space, along with their primary and powder bathrooms. While the tub had to be totally gutted due to lingering damage from a past fire, keeping the old setup was a must for the couple: At the time of the remodel, they were expecting their first child. “I knew if I didn’t get it done now, it would never happen,” says Cushnie.

The peachy pink wall color was Cushnie’s idea (she wanted to bring in nods to Mexico City, where Oscar grew up and where the couple got married). “I felt like a warm pop of color would bring it all to life,” she says. Once the new design direction was set, it was all about carving out storage and making the most of every inch. Here are three big ideas we learned from the 35-square-foot makeover.

Gaining additional space hinged on swapping the surface-mounted medicine cabinet for a recessed one (Zacks figured out that there was enough room behind the wall to add a mirrored unit from Restoration Hardware). The designer had the vanity custom built by someone she found on Etsy. “It’s a floating structure, so you can see the tile continuing under it, and it creates the illusion that there’s more space,” says Zacks. The very top drawer has a U-shaped cutout inside so it can fit around the plumbing. Adding the floating marble shelves over the toilet (the brackets are from Rejuvenation) was a last-minute decision to gain even more storage. For a personal touch, Cushnie hung a work of art by one of her best friends from high school.

Divide Up Your Stone 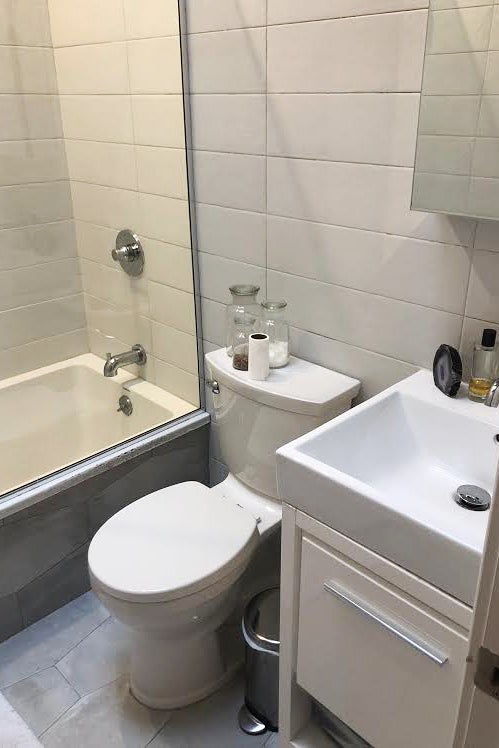 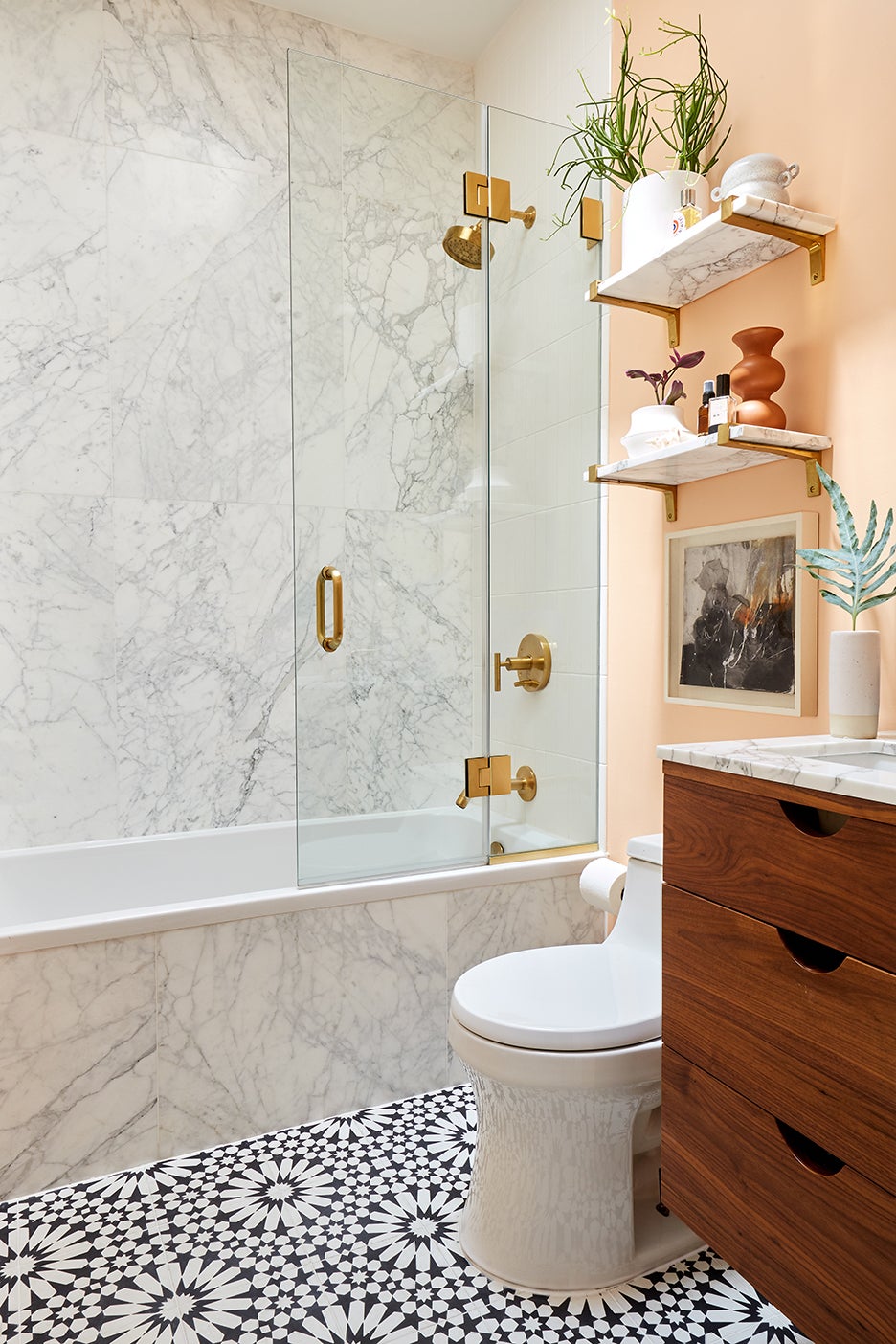 Marble was a must-have for the shower wall, but a continuous slab, while high on Cushnie’s wish list, wasn’t in the budget or in the timeline (the pieces take longer to hone), so they ended up going with large-format Calacatta gold tiles (24 by 36 inches). “We tried to align the veins so it appears to be one piece of stone,” says Zacks. To save even more, she used 2-by-8 plain white Metro subway tiles on the side walls and stacked them vertically to create some unexpected visual interest. The graphic cement floor tiles are by Moroccan Mosaic ($15 per square foot). “It’s so easy to fall in love with something that is 10 times outside of your budget, but there is always a more cost-effective way to figure it out and get you as close to your dream as possible,” says Cushnie.

Make the Tub-Shower Combo Work for You

Cushnie was determined not to have a shower curtain, but they still needed some sort of barrier to block the shower area. Zacks came up with this glass partition design: One part of the wall is static and the other part is situated on brass hinges that swing toward the shower, not away from it. “Or else it would hit the toilet,” she points out. It’s the little tweaks in a teeny space that make bath time a breeze.