In 3 Days, Everything About This Once Beige Bathroom Changed

From the windows to, yes, the walls. 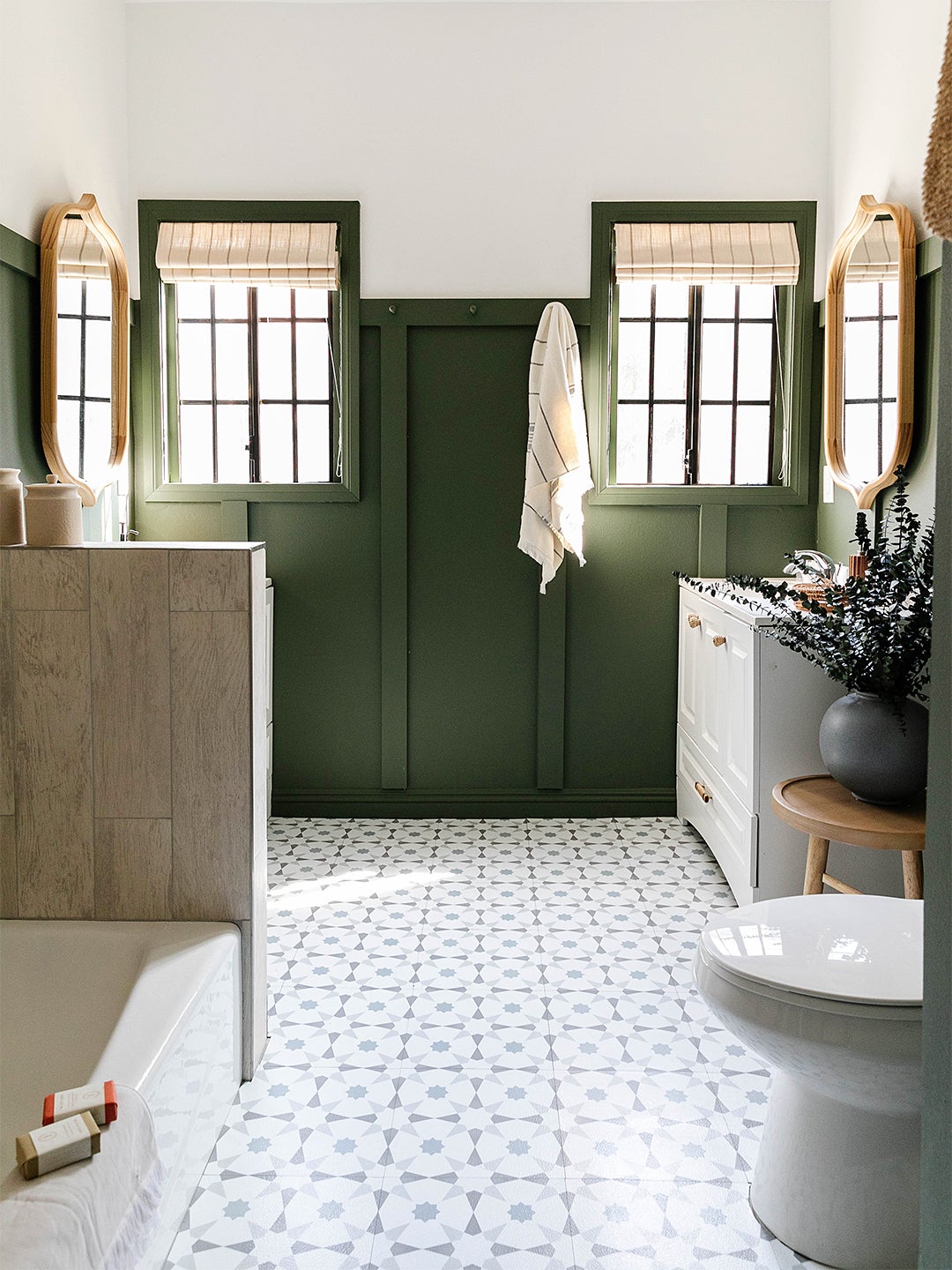 By Los Angeles standards, Drew Scott’s bathroom qualifies as huge. In fact it’s so big, the Lone Fox creator and seasoned rental renovator didn’t know where to begin. “All the bathrooms I’ve ever done have been so small that I was only able to do a few things to them,” he explains. “With this one, I had a full blank wall here, extra space there. I didn’t know what to put where.”

The biggest eyesore in the space was the wood-looking tiles that spanned not only the shower and bathtub (plus the awkward half wall) but the floors, too. It all blurred into one beige blank canvas. Over the course of just three days, Scott made as many updates (he couldn’t touch the vanities, per his landlord’s request) to the room as possible to fill it with both style and light. “This whole area was one I really put off until the last moment, but it turned out to be one of my favorites,” he says.

Let the Walls Do the Talking

Board-and-batten has become one of Scott’s go-to treatments (watch his full how-to tutorial here). His biggest tip when installing the paneling system, made up of horizontal and vertical boards: Hang the former ones first. “A lot of people will mount their vertical wood pieces first because they want to see all those slats, but most of the time they cut them the exact same height—and our walls aren’t always perfectly straight,” he points out. Instead he suggests getting an even border around the top and then measuring each vertical piece one by one.

Two coats of Benjamin Moore’s dark green Backwoods (in the brand’s Aura range, which is great for high-humidity areas) helped diffuse all the shades of cream and brown happening in the bathroom. “I really wanted to do something opposite from all the white,” he says of opting for high contrast.

Hate Your Shower Door? Hide It

To add even more texture to the bathroom, Scott hung a breezy white curtain from Target in front of the glass shower door (which still sits on its hinges). “It hides that whole area when I’m not using it,” he says.

Fortunately for Scott, the vanity legs screw on and off like a charm, so when he was laying down the peel-and-stick floor tiles from Amazon ($75), he could just slip a few right under to achieve a seamless look. When he would run into corners where there were small gaps, he just cut off slivers from excess squares, which fit in the nooks perfectly. “You just listen to music and do it,” he says of the repetitive process. “It’s not hard at all.”

So long, medicine cabinet. Hello, chic mirrors (another Target find)! Knowing he had enough storage underneath the sinks for all his bathroom products, Scott opted for a less bulky appearance. “After I changed the wall color, swapped out the tile, and added new knobs to the cabinets, I loved the way the vanities looked,” he says. It’s all about creating the right illusions for less.