Shower Mood Lighting Is a Thing, and It Gives This Jersey City Bathroom Spa Vibes

Sconces aren’t just for above the vanity. 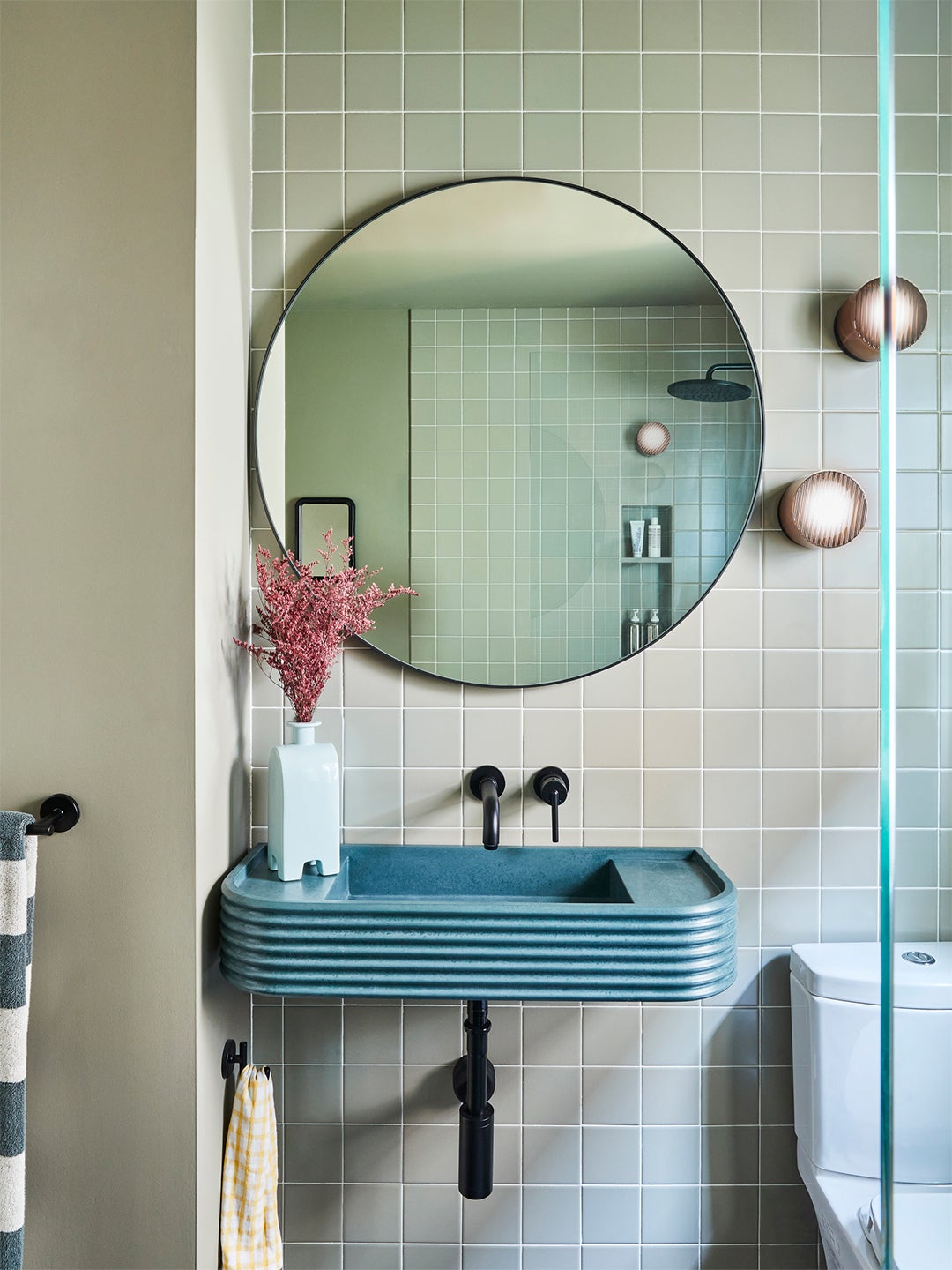 All-white bathrooms are a dime a dozen; Mark Baehser and Joey Meyers wanted none of it. After moving into a 1900s Victorian home in Jersey City, New Jersey, in 2015, one of the couple’s first orders of business was painting the main upstairs bathroom the complete opposite hue: black. Fast-forward five years (and throw a pandemic lockdown on top), however, and they were ready to give the space a full refresh. 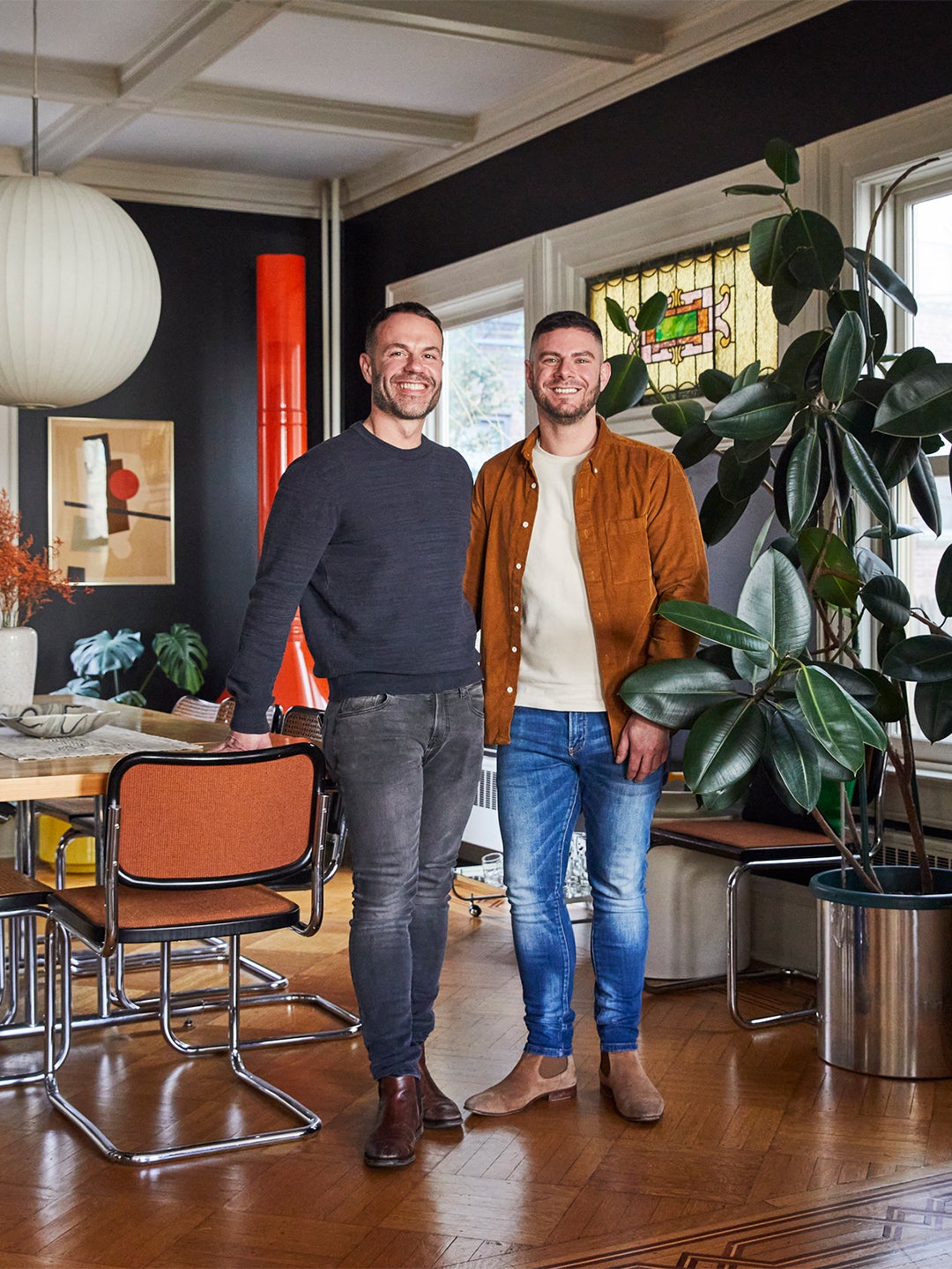 The last full renovation was done in the early 2000s, and the space had seen better days. “The grout was lifting, the caulk seal around the tub was pretty gross, and it wasn’t well ventilated,” says Meyers, who owns Ball and Claw Vintage, part of Brooklyn’s Dobbin St. Co-op (Baehser is a pediatrician). There were also multiple layers of tile to peel back from previous remodels. Another coat of paint wouldn’t cut it, so they tapped Stephanie Lee of Block Renovation to design a cozy, spa-like room around one feature: a forest green cast-concrete sink.

When It’s Love, Stand Your Ground

Meyers had saved the Kast basin on Instagram months earlier and he immediately knew it would have pride of place in the new bathroom. Even lengthy COVID-related delays (the British-made sink was held at customs for weeks) and the added caveat that the plumbing would have to be retrofitted to American standards did not deter the couple.

Losing Storage Is Worth It When You Gain Light

Another must: Replace the tub for a roomier walk-in shower, which required nixing an awkwardly sized closet to make room for the new stall. “It was near the door and made the entrance feel very narrow and cramped,” says Lee. “Removing it made the bathroom feel a lot more spacious because it allows light to stream all the way through.” Save for the shower plumbing, which had to be moved from the wall that was knocked down, the rest of the layout stayed in place (a major cost saver).

It made sense to stick to one material for the walls and another for the ground—that way the tight quarters wouldn’t feel as busy. After a Goldilocks-like elimination process (“Some felt too dark, others too light, but this one was the perfect earthy, warm, light gray,” says Lee), the designer landed on Daltile in Architectural Gray and chose a ceiling paint to match. A black floor tile by the same brand anchors the room—and provides a slip-free surface underfoot thanks to the small scale and therefore additional grout surface.

An oversize round mirror above the sink was essential to make the space appear even bigger, but it left little room for vanity lights. “I had originally lined up the sconces vertically next to it in the design plans,” says Lee. “But then I thought, what if we made them bouncy?” Placing the round copper sconces at an angle embraced the accent’s curves. A third matching fixture found a home in the shower, giving the couple those soothing spa vibes. “It’s a little bit sexy to have this kind of moody lighting in the shower,” says Lee. “It’s a whole experience.” 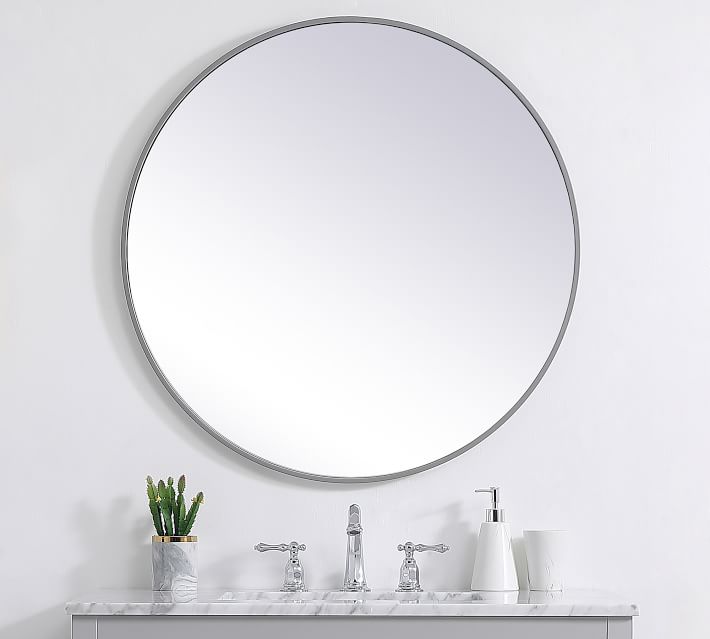 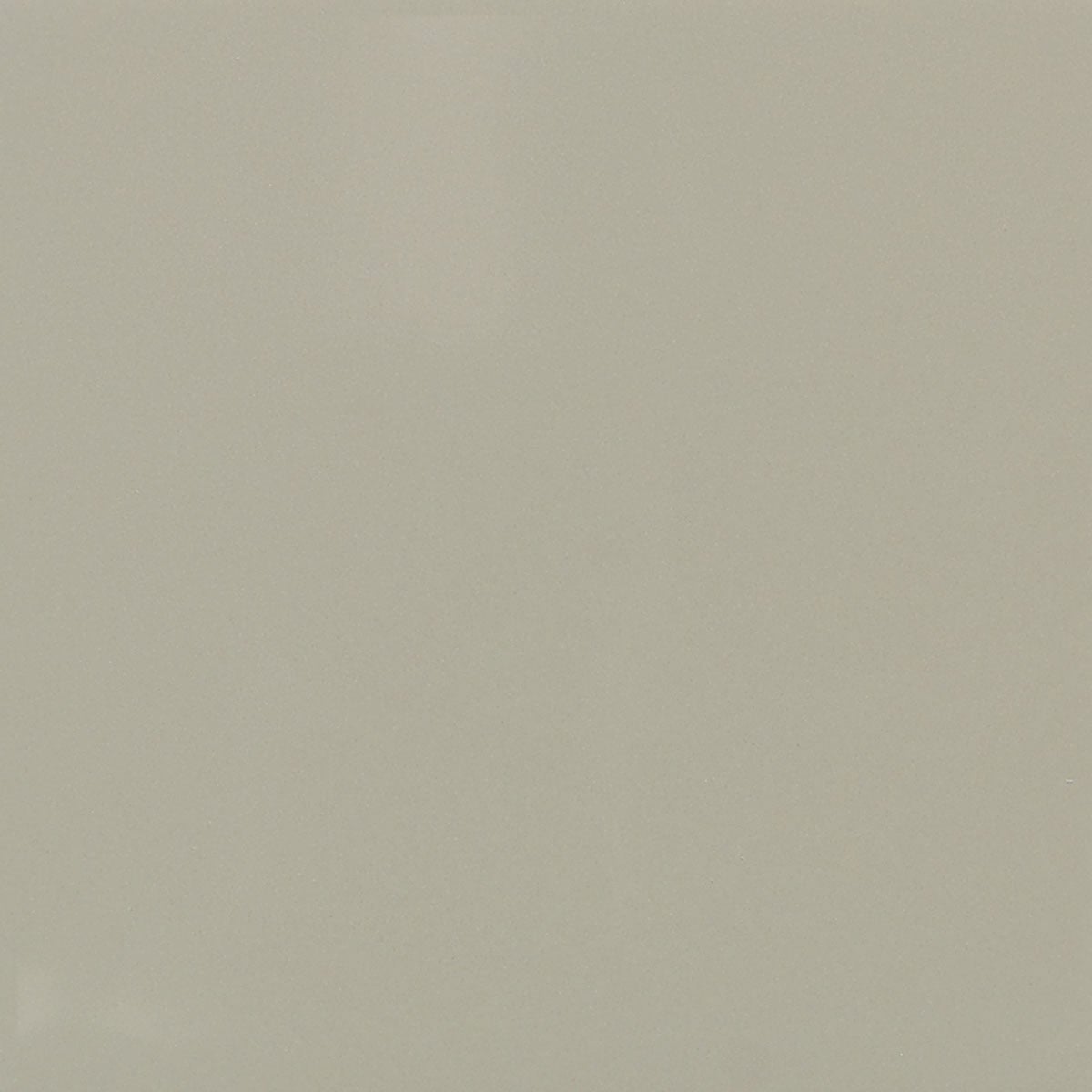 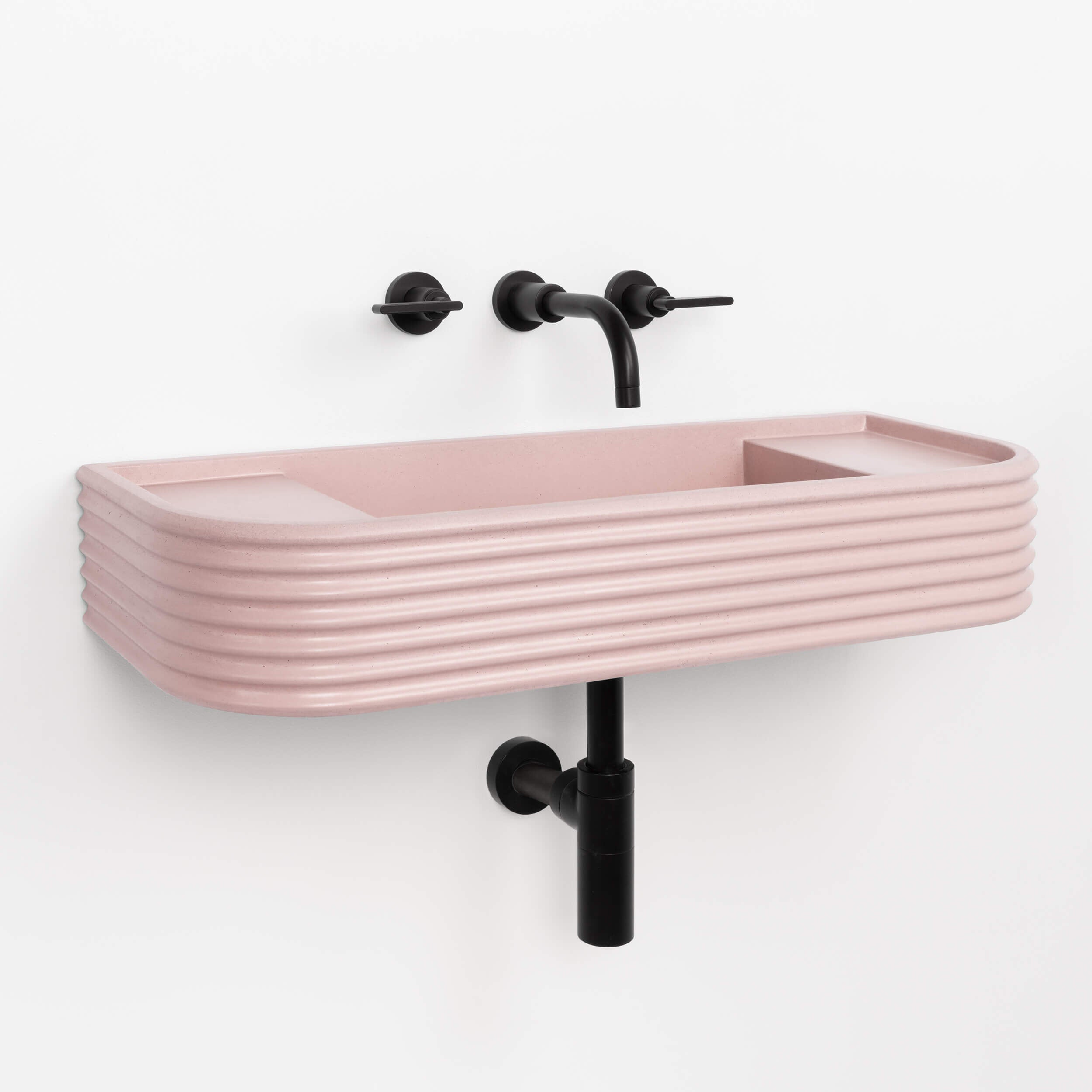 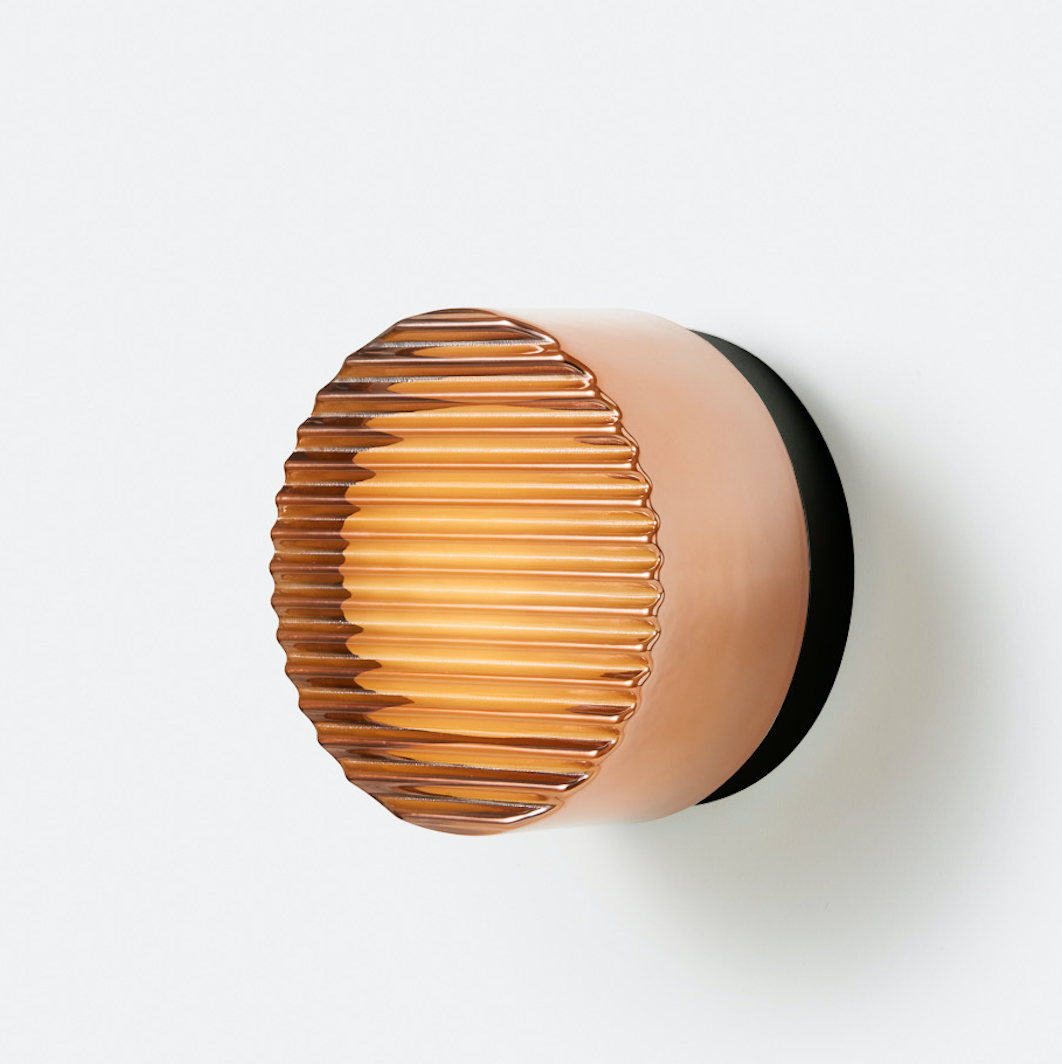