Resale value was top of mind for the designer. 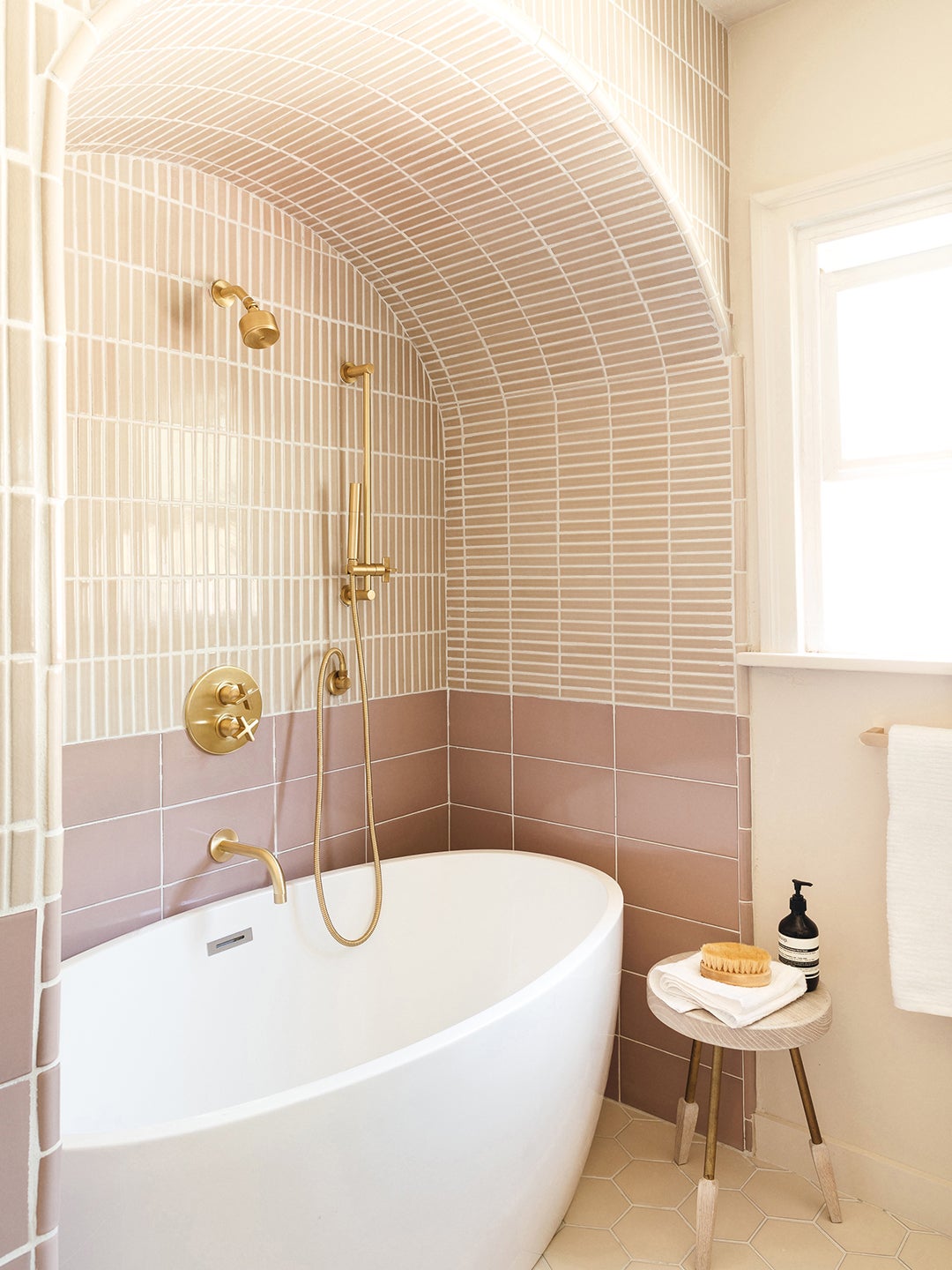 “The bathroom arch is the 1920s equivalent of the subway tile backsplash in 2021. It’s the thing that everyone wanted to have,” says designer Anne Sage. No one could have predicted that the detail would be as covetable now as it was a century ago, but there Sage was with her clients, a young couple who had just bought a 1920s Tudor-inspired home in Los Angeles, standing in a bathroom that had not one but two arches. And they wanted to keep them. “It was definitely a jaw-dropping moment,” Sage recalls of walking into the space for the first time. The buttery gold wall tiles and black bullnose trim were 100 years old. “You realize, this is what new builds in 1923 looked and felt like, more or less,” says the designer.

She dubbed the nook where the toilet was the “potty cave” because the narrow channel around it barely let in any natural light. But the homeowners, one of whom works in historical preservation for the city, were set on keeping the layout. It was up to Sage to make the unique shapes work while still adding value, “because they see this as their first home, not their forever home,” she explains. “It was a happy accident that arches are trending in design right now. I felt like that was an opportunity.” Ahead, she reveals how they updated the space while keeping the architectural character intact.

Sage worked with Pulled, a service that makes managing and paying contractors seamless, on the construction, given she had only two weeks to flip the space (it’s the only bathroom in the house, and the couple had a 1-year-old child at the time). It was actually the founder that suggested they rebuild the arch over the shower so that the radius would be proportional with the other one. “It makes it much more harmonious,” says Sage.

Double Up on Tile

The soft mauve-pink tiles in the space, all sourced from Fireclay’s Desert collection, pays homage to Art Deco design while still feeling right for the current era. The flooring is a mix of light blush Dawn and sandy-toned Ivory. Sage wrapped the lower half of the walls in 6-by-12-inch rectangles in Adobe, then switched to 1-by-6 sheet mosaic tiles in Sand Dune for everywhere else. The arrangement was mathematically satisfying, but also “if you have really big tile sizes, you can’t create curves,” she says. “We needed  that small tile size for up and over the arch.” Sage took a sample of the tiny tile to the Portola Paints showroom to pick out a matching paint color for the walls: County Line in an ultra-flat acrylic finish.

Situating the showerhead within the center of the arch, over the new tub (an AllModern score), was a practical decision more than anything: They wouldn’t have to hunch over anymore. Psst: A curtain arrived shortly after the reno ended.

“A freestanding tub has a luxury spa vibe to it,” notes Sage. “We were looking at this with an eye toward increasing resale value.” What potential buyer wouldn’t want a bathroom that looks like it belongs in a boutique hotel?

Create an Optical Illusion With Your Storage

Making the 8-by-8-foot room look larger than it really is would be another big draw if the couple decides to sell the home anytime soon, so Sage decided to go with a floating vanity structure from BOXI, a new line of quick-ship cabinets from Semihandmade. “Even though it’s plug-and-play, it looks custom,” she says. The piece cost around $1,500, and she opted for the Oat Slab Cabinets and the Bowman Drawer Pulls by Rejuvenation in aged brass.

The simple fix for curing the “potty cave”? Lighting. Sage added a vintage-looking globe sconce (it’s the Reedway Wall Mount by Rejuvenation) to the back wall. Before ordering it, though, she tested it out with a balloon to make sure it wouldn’t protrude too far. “It brightened the little area right up!” she says.