Who Needs a Closet When You Can Have a Secret Reading Loft?

While her kid napped, this mom DIYed. 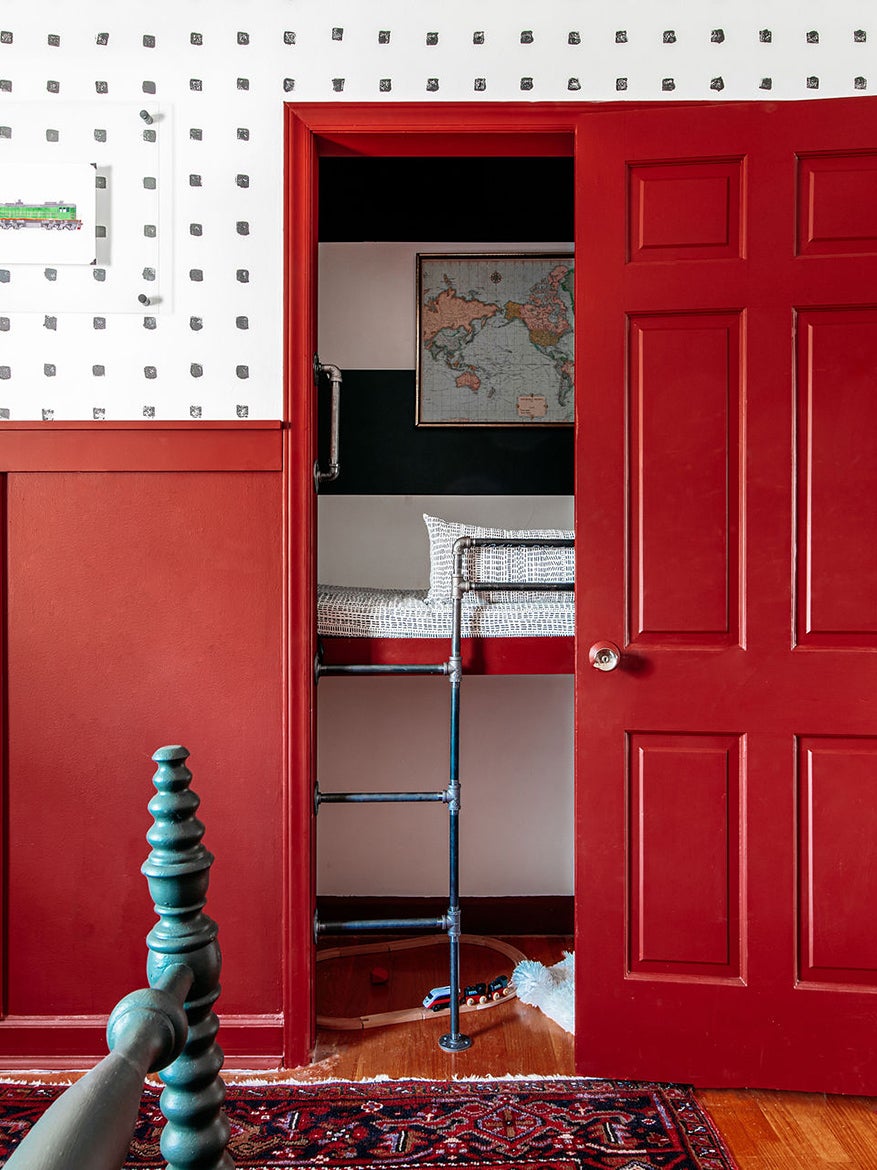 Danielle McKim was used to having free rein when she decorated her two kids’ nurseries. But when designing her son’s big boy room, her 4-year-old client, Taylor, had his own requests: the color red and trains. “My goal was to have the theme be everywhere but in a very stylized way,” she says.

Having just moved into a new house (and because she has a habit of picking things up on Facebook Marketplace before having a plan for where they might end up), McKim had overflow items to kick things off: a large nine-drawer mid-century dresser and a bordeaux and blue Persian rug that once grounded her old living room. The two pieces set the scene for storage needs and a vibrant but pulled-together color palette that the DIY pro then used to inspire every other decision.

Focusing on the Walls First

Blank walls wouldn’t cut it, so she decided to add board and batten wood, which she DIYed, cut, and installed herself in four hours during her daughter’s nap time. “When she’s fast asleep, nothing wakes her up,” says McKim, who sawed the planks in the room adjacent to where her 1-year-old was snoozing. Skipping the back panels and choosing not to replace the baseboards saved McKim a ton of time, which meant she could focus on the next step: paint.

After bringing back a few swatches from Home Depot and applying them to the wall, McKim tried to involve Taylor in choosing the exact tone, but “everything just looked red to him,” she says. So she picked the color she was most drawn to—Red Pepper by Behr: “It’s the most perfect red I’ve ever seen.”

Making Her Own Wallpaper Effect

Many people would have seen the bottom half of the wall’s treatment and left the rest blank, but not McKim. She had other plans for the top part. Inspired by a wallpaper she saw on Pinterest, she ordered a stencil from Etsy that would re-create a similar look. “When I opened the box, I immediately knew it wouldn’t work, so instead I decided to make my own,” she says. Cutting a square from a staining pad into a makeshift stamp, she then created a grid-like guide using cardboard and started stamping away. The whole process (again done in between naps and the kids’ meals) took two days. “It was tedious but easy to do,” she recalls.

Transforming the Closet Into a Secret Hideaway

The next project McKim undertook wasn’t so easy. “I’m pretty well versed in DIY projects, but this closet loft gave me a run for my money,” she says. It wasn’t that she was worried about losing storage space—her son’s clothes are small and fit in the dresser just fine. But she was extra-conscious that it would have to be safe for both her children to play in. First, she built a platform and secured it using an E-shaped frame. “I sat on it and tested it multiple times to make sure it was structurally sound,” she adds.

McKim had initially planned on doing a wood and rope ladder, but after seeing plumbing pipe at Home Depot, she decided on a whim that it felt more train-themed. For the seat cushion and pillows, she repurposed West Elm curtains she had purchased for her daughter’s room (but never used). With $2 leftover denim fabric she had bought for reupholstering a vintage sofa, she built a few book slings. “I originally had ledges there, but it quickly became apparent that the books needed to be more secure when both kids were bouncing around,” she explains. To finish off the space, McKim hung a vintage map—the first thing she had bought after finding out she was pregnant with her son. “It’s a regular thrifted find, but it feels so sentimental to me,” she says. “He doesn’t know it yet, but it will one day hang in his first apartment.” (Spoken like a true mom.)

McKim reused the denim textile two more times: on a train-themed punch-needle pillow she made for the bed and a soft roman window shade, which she sewed herself without having to worry about the mechanics of it because she knew it would be purely decorative. (The blackout drapery panels she ordered from Martha+Ash would be the ones to open and close to block out light.) “I will 100 percent get on my soapbox and say that custom curtains just transform a space,” says McKim. She opted for a simple white design with a railroad-like trim, knowing that she wanted these to grow with her son.

To really drive the train theme home, McKim ordered prints from an Etsy shop, which she hung using floating glass displays she made herself. “My goal was to get art in the space without covering up too much of the hand-stamped wall,” she says. The finishing touch came in the form of a DIYed railroad crossing sign made from leftover board and batten wood. McKim used shelf holders to secure the base and purchased green and red LED lights that could be controlled with a remote for effect. “I felt like Mom of the Year after making that sign,” she says.

After keeping the room design under wraps from her mini client, McKim gave him the big reveal after day care one day. “He was a little timid at first, but when we were laying in bed that night, he said, ‘You made all that for me?’” she remembers. “It was the sweetest moment that he was just reflecting on it and looking around and feeling appreciative.”