Why Choose Between an Outdoor Shower and Tub When You Can Have Both?

From a zero-character yard to a back-door jungle. 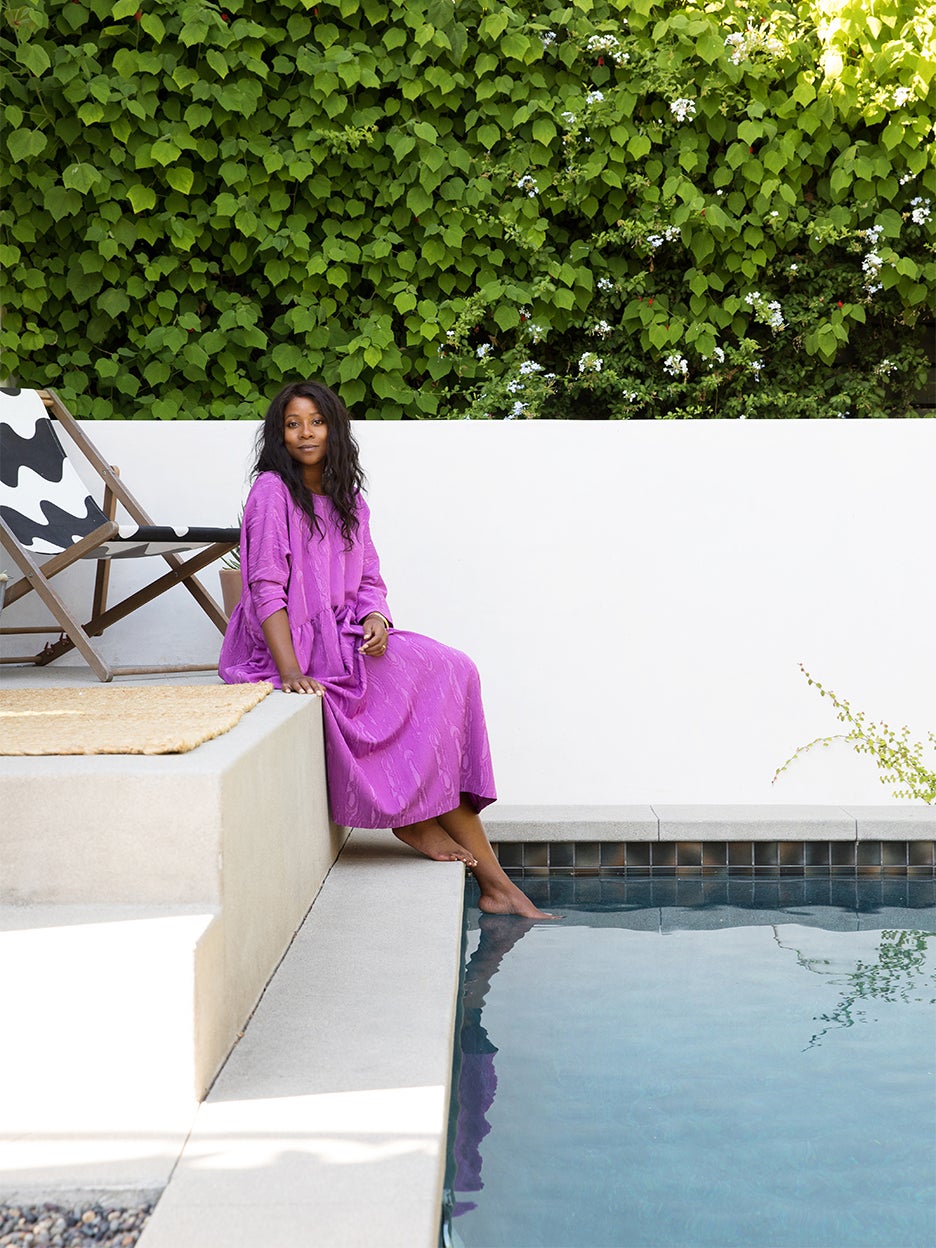 When Camilla Blackett first saw the backyard in what would soon be her house, it was a dried-out and completely flat lawn with zero character—and that’s how she knew it was perfect for her. “I wanted a blank slate,” says the Los Angeles–based writer. Blackett’s first order of business: adding a pool.

She tapped Chad Johnston of Johnston Vidal (whose portfolio includes Mandy Moore’s space) for the job. “He uttered the most magical words a man has ever said to me: ‘Do you have a Pinterest board you can send me?’” says Blackett. The result is an ideal gathering spot, complete with a seat and remote controls so she can heat it from an app on her phone. “It’s all very conducive to drinking wine with my girlfriends into the wee hours,” she adds. With the largest project out of the way, Blackett turned her attention to creating what she calls a back-door jungle.

“I wanted people to feel like they were walking into a tropical spa the moment they entered,” she explains. With the help of designer Thayna Alves (“She’s a plant wizard”), Blackett peppered in banana-leaf palms, which double as a curtain for the outdoor shower. Decorative touches, like an army of yard sale–sourced pots and a black-and-white tile from the hardware store, emphasize the greenery spilling out of every corner.

The star of the show, though, is undoubtedly the claw-foot tub. It had been on Blackett’s wish list for a while (as a Brit living in L.A., she was ready to take advantage of the warmer weather), and Alves managed to track one down on Craigslist for around $500. “At this point, I mostly do all my bathing outside,” she says. She starts her day in the outdoor shower, accompanied by an early-morning cacophony of hummingbirds and dragonflies, and winds down with a nighttime bath. “Given how fraught this entire period of pandemic and racial reckoning has been, forcing myself to take an hour a night to sit there, look at the sky, listen to the crickets, breathe, and, more often than not, have a bit of a cathartic cry, has allowed me to process a lot of the dread and heartache of this time.”

“I wanted people to feel like they were walking into a tropical spa the moment they entered.”

Another addition that’s become essential during quarantine: Her “little farm,” as she calls it. “The timing of my vegetable garden and the pandemic could not have been more prescient—the day it was up and running was the same one that California announced shutdowns,” remembers Blackett. She made sure to make the most of her harvest: Friends stop by to shop her backyard, trading in their homemade kombucha for some beets.

Kale, rainbow chard, carrots, zucchini, cucumbers, eggplants, tomatoes, passion fruit, oranges, lemons, a fig tree, and even a finger lime tree that Blackett fell in love with when she visited Australia and managed to find Stateside complete the impressive lineup. “For clarity, I do zero percent of the gardening—it’s all my husband, Doug,” she points out. “It’s been a calming daily project to focus on while the chaos of the world swirls.”

Blackett may have only had the finished backyard for a couple of months, but she’s already invited friends over for socially distanced hangouts, centered around to-go cups of wine and cinema projector movies by the pool. She even had her legal wedding ceremony in the vegetable garden; in a serendipitous turn of events, all the plant beds are six feet apart, so she could safely distance her guests. “Community is a word that means a lot to Doug and me, because what is the point of having nice things if you’re just going to hoard it all?” says Blackett. “Having this outdoor space to quiet my thoughts and express gratitude…it’s a daily exercise in reassuring myself that we will find a way through this.”