Portrait Gallery Walls That Are Better Than Friends

Decor for the introvert. 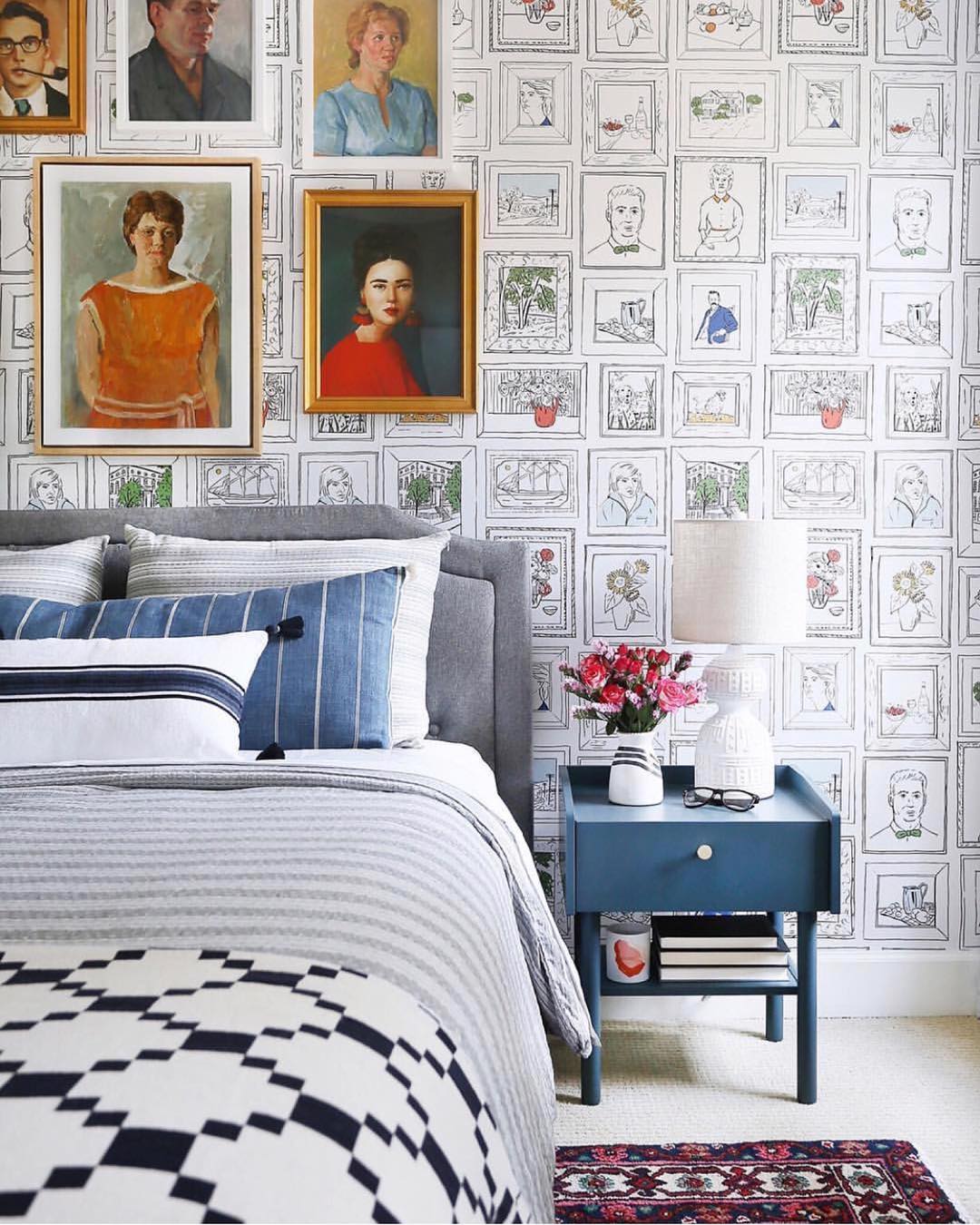 Before cheeky pitchers with abstract faces and Cold Picnic’s boob-themed bath mats were a thing, there were portraits: art’s most personal depiction of the human form. For centuries, portraits have served as a way to remember those from our past. Today, homebodies in search of solace find comfort and good company in pictures of other people. Gallery walls are a great opportunity to put all the art you love into one place, but for the introvert at heart, the display is an excuse to gather the people you love into one room—no draining conversations required. While it isn’t unusual to find a portrait or two mixed into a larger gallery wall, there’s something compelling about an entire display devoted to familiar (and not-so-familiar) faces. The result is often an amicable gathering of strangers, each with their own story to tell.

Because breaking into a new friend group is hard, we asked a handful of designers and style-focused decorators to share how their personal portrait galleries came about. Ahead, they share the stories, soul mates, and hanging strategies that made a difference.

Strangers on the Staircase

Philadelphia-based designer Michelle Gage has one of the most impressive living room gallery walls we’ve ever seen, but once you take a few steps toward the staircase, you’ll find an underrated arrangement composed of colorful portraits. “I started to break out artwork out into categories and ‘stranger art’ emerged as one of them,” says Gage. “I knew I wanted to do something fun and quirky on the entryway staircase, so they quickly found their home.”

While Gage acquired the pieces over time, she stuck with unrefined oil-on-canvas works for a cohesive look. The portrait that started it all is fittingly displayed, front and center: “The girl in the purple shirt with the topknot on the mint green background. I found her at a flea market in Raleigh, North Carolina, and the obsession spiraled from there,” shares the designer. Gage met the woman in the red shirt (now dubbed “Betty”) at a local estate sale under a pile of junk in a third-floor bedroom. “She wasn’t even priced; I don’t think anyone knew she was there,” she recalls. “I snagged her for $40, and she’s been my favorite ever since.”

Aside from spacing each piece two-inches apart, Gage takes an organic approach to hanging, letting every wall develop naturally over time without ever formulating a layout. “I also hang in teams,” she adds. “My husband holds the hammer and I eye the placement.”

Backed by a punchy red Hygge & West wallpaper, designer and photographer Danielle Nagel’s wildly colorful arrangement is, in many ways, a love letter to one of the most important women in her life: her grandmother.

“We found all of them among hundreds of paintings she had stored away at her house after she passed,” shares Nagel. “She loved painting portraits of women and using bold and bright colors against a dark background.” Although Nagel was originally inspired by a similar art display of Frida Kahlo portraits at Azucar Palm Springs, her gallery hits especially close to home. In the bottom righthand corner, the Dazey LA founder decided to place her grandmother’s very own self-portrait. The piece doubles as a signature for the larger color story at work. “She just captured herself in such a striking way. It looks and feels so much like her, and it fascinates me that she was able to re-create her essence so well,” says Nagel.

**“** She just captured herself in such a striking way. It looks and feels so much like her.”

Before picking up her toolbox, Nagel sorted the paintings on the ground and took a photo of the spacing to figure out the best layout. “After that, I took a photo of the wall and photoshopped in the wallpaper and artwork. This was great because it helped us decide the best wallpaper to use and what colors we should paint the frames to match,” she adds.

Liz Solms of Banana Tree Consulting also took a very personal approach to her portrait gallery, though you won’t find any family members on display. “There is something about the female body in its nude state that is so varied and fascinating to me. There’s simultaneously a feeling of allure and comfort,” says Solms.

The arrangement is meant to be illuminating, not jarring. A longtime collector of Haitian art, it seems only fitting that the first nude Solms found for the space was by an unknown Haitian artist. “She’s lying down on a vibrant bed of tropical fruit with her guitar. I guess this started the idea of surrounding her with other ladies,” she shares.

“There is something about the female body in its nude state that is so varied and fascinating to me.”

When it came to settling on a style or medium, Solms was sure about one thing: She wanted as much variation as possible. “My favorite piece on the wall is actually by another unknown artist, an eBay find,” she continues. “It’s oil and acrylic but also mixed with collage. It has a very ’70s feeling to it. The main nude is facing away from the viewer, and three collaged shadows of her emerge off the painting—trippy.”

Erin Wheeler’s bedroom gallery wall didn’t start with a score at an auction or a hidden gem in the basement—it began with a graphic wallpaper print. “I wanted to highlight and play up the quirkiness of that accent wall,” says the stylist and designer behind Sunny Circles Studio. “I wanted the colors to complement the wallpaper but also stand out on their own.”

Wheeler’s go-to companion is the bold lady in red—a vivid piece dubbed Florida by Janet Hill. “I love the soul that all these faces brings to this room and [love] vintage in general,” shares Wheeler. “It’s always been important to make sure I have a touch of it in every room I design.”

Many Old Men by the Sea

When Ali Arakawa, co-owner of Fare Well Trading on Etsy, gets down to business at her Queens, New York, home, she knows she’s in good company. “The overall theme is beards or facial hair,” she says of her character-filled collection. Arakawa fell in love with this group of paintings while sourcing them for a client’s store. She was lucky enough to take the group home when the space closed.

“Whenever I work creatively, it’s very personal for me,” she shares. “I think that’s why a good number of the pieces in my home are from displays I’ve created in the past. They are nice reminders of the projects I’m proud to have worked on throughout my career.”

advertisement
“I like to play around with portraits facing each other. It’s fun to make them look like they’re having a conversation.”

Just over her desk, a sea captain at the ship’s helm stands guard. “The expression and colors really speak to me. It’s the relaxed yet confident and determined look on his face that I love. And that rope detail on the frame is amazing to me,” says Arakawa.

With her level, tape measure, hammer, and drill in hand, Arakawa starts the layout process by placing the largest pieces on the floor and filling in the gaps with smaller frames. “If I’m using portraits, I like to make sure that all of the head positions and eyes are facing in a certain direction,” she suggests. “A good trick is to make sure the portraits toward the ends look toward the middle of the wall, with portraits toward the center of the wall looking forward. I also like to play around with portraits facing each other. It’s fun to make them look like they’re having a conversation or sassing each other.”

Robyn Donaldson’s colorful south London home is a treasure trove of online finds. Along with a yellow velvet sofa, one of her greatest gems to date is a portrait in her bedroom. “There’s an amazing portrait of a man by Henryk Gotlib I bought off eBay years ago, He’s a Polish artist and it turns out he’s a bit famous. As soon as I got him, I knew he needed some pals,” says Donaldson.

One by one, she began filling in the gaps with oil expressionist and impressionist paintings, opting for nudes where she could. “I think I connect with [portraits] more than most other forms of art, as it’s so personal and romantic and evocative,” she says. “Each one is a little visual love song to the sitter. I basically wanted a micro-version of the National Portrait Gallery in my home.”

Within her personal Portrait Gallery, admirers will discover a picture of her husband. “It’s so lovely his mom burst into tears when she saw it,” continues Donaldson. “He, on the other hand, was like, ‘Why did you do that?’ He’s not a show-off like me.”

The group delivers a sense of drama that a single portrait can’t.

See more stories like this:  How The Wing’s Curator Masters the Art of Art Collecting This Is How Parisians Display Art in Their Homes Make Your Own Masterpiece With This Easy Paper Art DIY