Designer and photographer Danielle Nagel takes us inside her bold Palm Springs oasis. 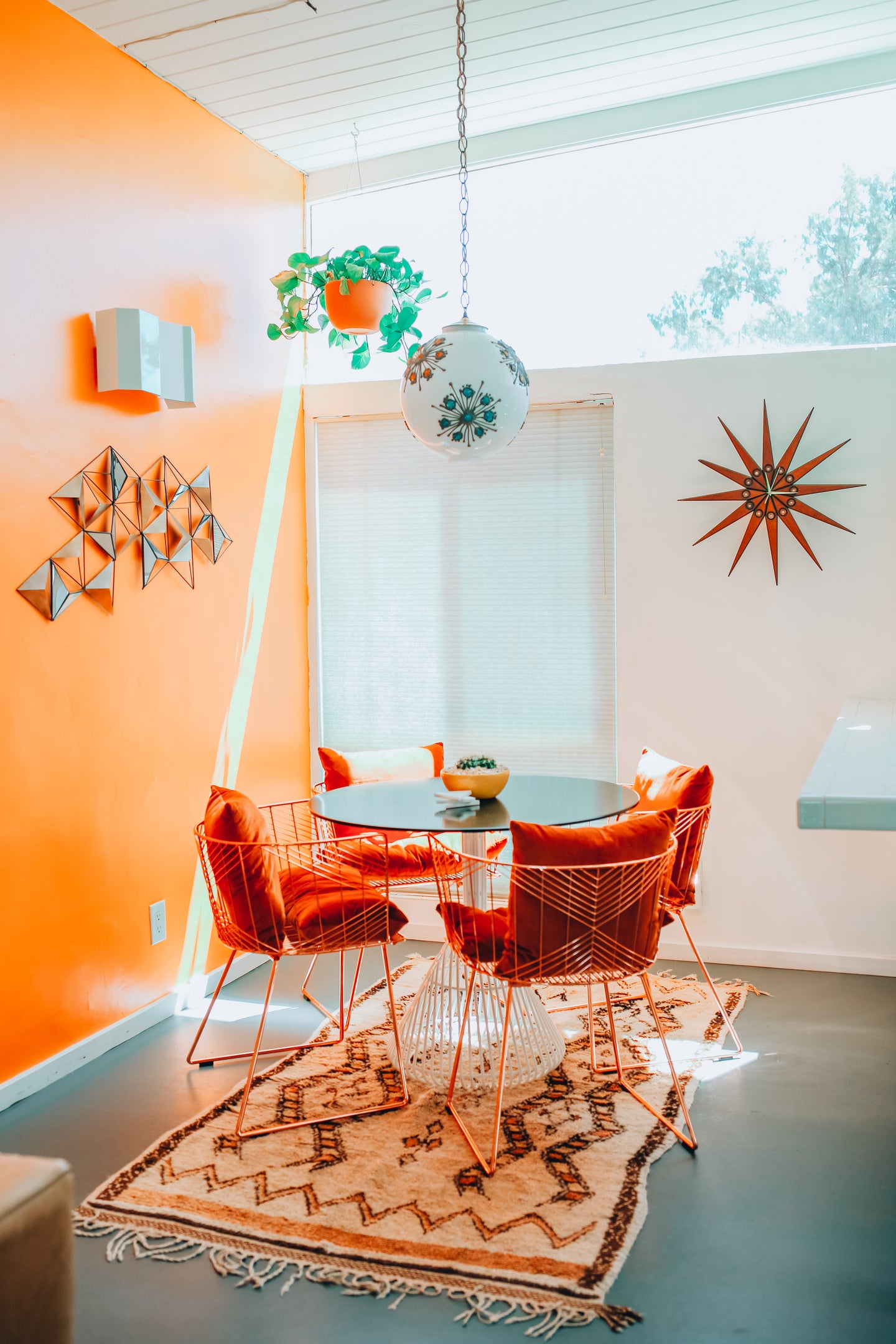 “What if we made our first home our vacation home?” Few first-time home buyers would dare ask such a thing. But for Danielle Nagel, the fearless graphic designer, photographer, and colorful creative behind Dazey LA, this was the question that sparked her latest adventure. “It seemed really silly, like it wasn’t even possible. But I kept pulling up that listing and looking at the house and it was so beautiful. My heart just burst.”

Adding to her growing list of achievements (in addition to running her line of graphic art apparel, Nagel is also one of the founders of Biz Babez, an all-female coworking space in downtown LA), the California native can now put Airbnb host on her resume. Though, it was only by sheer chance that the designer and her boyfriend, Phillip, became the proud owners of Palm Spring’s new “It-rental,” which is a wildly bold mid-century retreat appropriately dubbed the Dazey Desert House.

“We started our housing search in Los Angeles and spent a few years looking for houses, putting in offers, getting in bidding wars, and getting our hearts broken. The market is just so intense out here and you end up putting in massive offers on places that you don’t really like that much,” recalls Nagel.

It was only when the couple made the trek out to Palm Springs for Modernism Week that they stumbled upon their dream house. “We were in the car driving home to LA and I hopped on Zillow to just see… and I saw this house. I was like, ‘Oh my gosh, this is the most adorable house I’ve ever seen.’ We just kind of paused for a second and went, ‘What if we made our first home be our vacation home and just Airbnb’d it out?’”

Nothing short of pure Instagram candy, Nagel’s arid California stay—which was designed and built by famed mid-century architect William Krisel—is like no other desert vacation home you’ve seen before. Bursting with vintage finds and loud color—think, sunny yellows, saturated blues, and fiery oranges—the home is escapism at its finest.

“We want our guests to feel inspired and excited, but also relaxed. I mean, people go to Palm Springs to relax and unwind. It’s been really cool to share our space with people who really appreciate and celebrate the design aspect of it,” she tells Domino.

Slightly traumatized by their experience house hunting in Los Angeles, the couple was prepared to have to splurge on the 1,000-square-foot abode. However, they quickly realized that this home was, in fact, a major steal.

“We drove out one afternoon from LA to look at the house and, of course, it was just as beautiful in person. As we were starting to talk to [our real estate agent] after we were like, ‘Okay, so what’s the game plan here, should we put in $50,000 over asking?” Because that’s how it was with every house we tried to get in Los Angeles. And she was like, ‘What are you talking about? That’s not how it works in Palm Springs—you put in a lower offer.’ Our minds were just blown.”

Aside from touching up paint, they made very few changes to the house once they had the keys in-hand. With Coachella just around the corner, however, Nagel and her boyfriend had just one week to get the spot up and running for the most epic housewarming party ever.

“We had everything prepared to deliver the day that we got the keys. It was crazy because we had to literally start from scratch, so it took a lot of planning—especially wanting to have it ready one week later,” notes Nagel. “Luckily, it was pretty turnkey aside from touching up a few things here and there.”

Much like her fashion designs, the home doesn’t adhere to one simplified style. Existing somewhere between funky, vintage and new-age cool, the space is a vivid amalgamation of aesthetics, eras, and personalities.

In the main sitting room, potted cacti, antelope horns, and a shaggy, psychedelic rug appear to pay homage to traditional desert living, circa 1960. “I’m all about adding that little bit of flair to it. It’s about mixing in those new pieces with the vintage pieces and bringing it together and making it really unique.”

Guests are only fully transported back in time once they step foot in the kitchen—a space that has essentially gone untouched since its original conception. “All of the cabinets are the original pegboard cabinets, which is a trademark of William Krisel. The oven is original and the stovetop is original,” she explains.

While Nagel is happy to admit that her boyfriend does most of the cooking when they stay at the house (“We have a very modern relationship. He does all the cooking and the cleaning—and he’s very good at it,” she laughs), she notes that, vintage charm aside, all of the appliances work to a tee.

One of the most impressive decorative moments has to be the

Backed by a punchy red Hygge & West wallpaper, Nagels’ visually compelling arrangement is, in many ways, a love letter to one of the most important women in her life.

“Awhile after we bought the house, my grandmother passed away. She was an incredible artist and the inspiration behind me getting into the art and design world. When we went to look through her house we found hundreds and hundreds of paintings that she had left behind, and they all kind of had that same vibe and vision that I wanted for that wall,” recalls Nagel.

Though the gallery wall had originally been inspired by a similar scene she spotted at a local restaurant that displayed a collection of portraits of Frida Kahlo, Nagel’s creation hits especially close to home. At the bottom right-hand corner, she decided to place her grandmother’s own self-portrait.

“She really captured herself. It’s almost like a signature at the bottom of her art wall,” suggests Nagel. “Throughout her life, she always wanted more people to see her artwork but she often hid out in her house and kept a lot of it there. I knew I had an audience and I could, in her memory, really show the world her work.”

No stranger to California’s desert landscape (although Nagel was raised in Lake Arrowhead she grew up visiting family in Palm Springs) the backyard is unsurprisingly one of her favorite spots to unwind. Looking back on their house hunting havoc, the designer shares that more and more of her friends appear to be retreating to the desert, where the prospect of buying a home feels decidedly more possible.

“One of my biggest goals was to buy a house before I was 30 and I don’t know if that would have been possible in LA, but I was able to make it work out here. As I got older I realized what a creative, funky, little town Palm Springs was. That’s what really drew me to it: It’s the culture, and the art, and the celebration of vintage style. So much of my collection and my designs have been inspired by Palm Springs. It’s been a huge part of my life and will continue to be.”

While Nagel hopes that the Dazey Desert House will ultimately leave a lasting impression on those lucky enough to spend the night, it’s also a place for her to feel re-inspired. Already, her home has been fueling her current fashion choices.

“We loved all the orange,” Nagel says of making minimal changes to the space. “Right after we got the house I started getting a bunch of orange stuff—I even got sunglasses to match the house just to be ridiculous and take pictures! We love it the way it is.”

If matching your accessories to your house isn’t a sign that you’ve fallen head-over-heels in love, what is?

Book your stay at the Dazey Desert House on Airbnb (for just $120 per night!), or follow along for inspiration on Instagram.