Nobu Ryokan lets you vacation like you're in Japan. 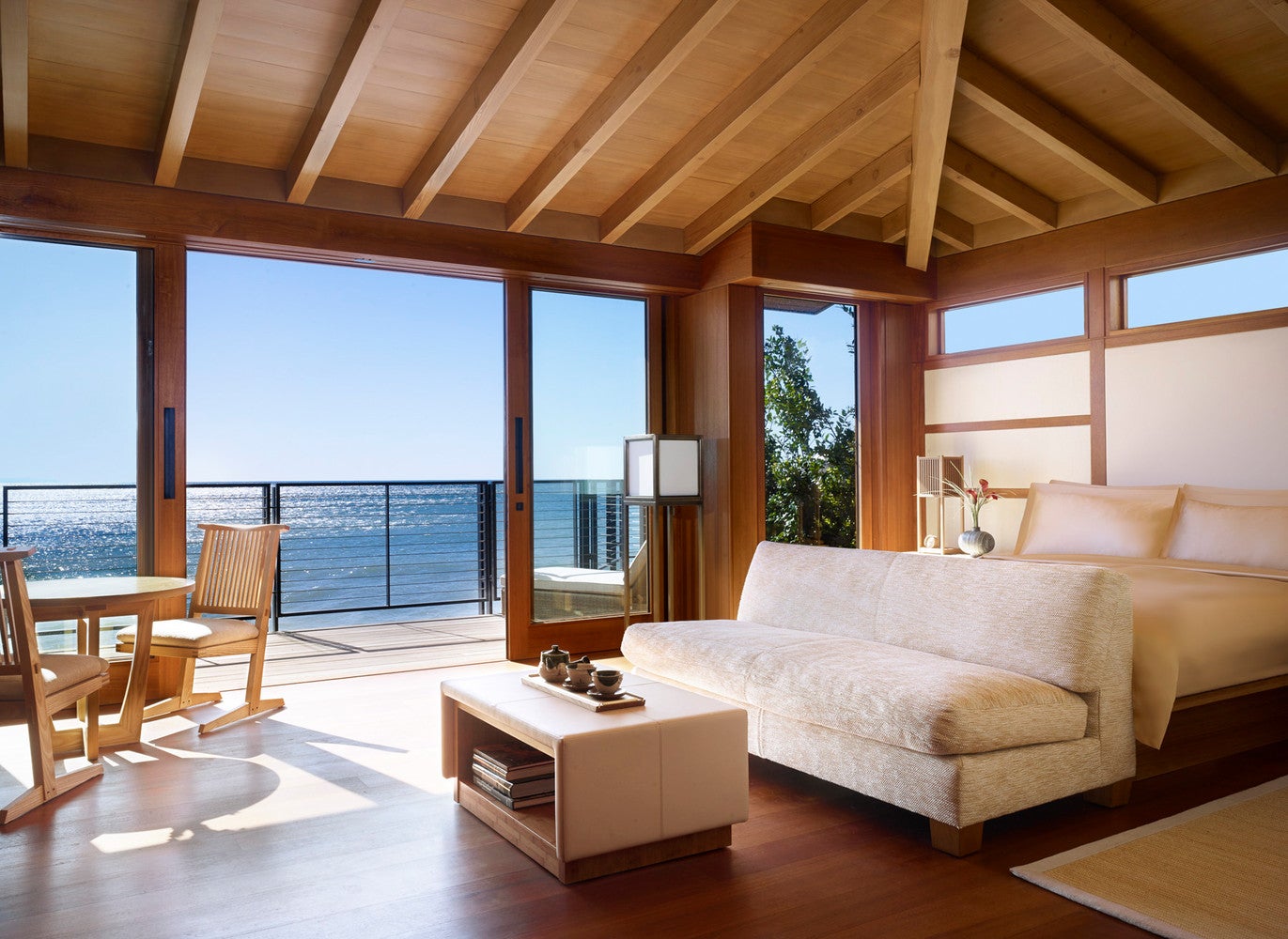 There’s a reason people love Malibu. Home to Barbie and convertible-driving A-listers alike, the idyllic California town is the epitome of luxury oceanside living. But for the travelers among us who only want to temporarily indulge in beachfront bliss, there’s Nobu Ryokan: an intimate, 16-room retreat, designed by Studio PCH and Montalba Architects, located on the shores of Malibu’s Carbon Beach where Japanese minimalism and West Coast vibes collide.

“The design concept of Nobu Ryokan blends elements of a traditional Japanese ryokan (inn) with Western elements of a bed and breakfast and a luxurious unique boutique hotel,” explains Severine Tatangelo, principal architect and founder of Studio PCH. “Interior and exterior spaces have blurred transitions, leaving guests feeling connected to the natural environment and the ocean.”

Abound in warm wood tones and calming neutrals, the hotel—which officially opened last June—pays tribute to the streamlined simplicity that often defines traditional Japanese ryokans. Large teak soaking tubs, colossal skylights, and spa-like amenities complete the soothing scene. Put simply: This ultra-discreet retreat is as much a spiritual escape for the soul as it is for the design enthusiast.

In keeping with the SoCal modern-meets-Japanese aesthetic that has long informed Nobu restaurants and hotels across the globe, Nobu Ryokan is a thoughtful fusion of distinctive design perspectives. To get a better sense of “the imperfect perfection” she hoped to channel on the shores of Malibu, Tatangelo walked the streets of Tokyo and Kyoto—visiting modern hotels and ryokans along the way.

“Simplicity doesn’t come easily. It took a tremendous number of hours designing, researching, and meeting with the teams, to make this project feel effortless and intuitive,” Tatangelo tells Domino. Her biggest challenge? Diluting the noise coming from the Pacific Coast Highway.

“We had to come up with a creative design solution to create a destination that reflects the high-end standards of the Nobu brand and, most importantly, materialize our client’s vision.”

Aside from the lush, ocean-facing gardens and constant connection to nature, it is the hotel’s evident attention to craftsmanship that will ultimately wow out-of-towners.

“The simplicity of the architectural lines, the blurred transitions between the exterior and the interior, the authentic and rich materials, the crafted details—from the knuckle joints of the exterior teak siding to the painstakingly-selected warm tones of the custom colored board-formed concrete walls—create a contemporary hideaway with a feel of a Japanese ryokan,” notes the architect.

To say that Nobu Ryokan is a hideaway would be an understatement. Given its unassuming entrance and emphasis on solitude, it’d be easy to pass by the hotel and never even know it was there—and that’s exactly the point. Though no two rooms are alike, each come with a private outdoor space (some include courtyards while others boast decks overlooking the Pacific), and are equipped with shoji doors, sandy-colored furnishings, modern tatami mats, linen kimonos, and spa-worthy bathrooms.

“Natural light and its interaction with architecture can be a profoundly poetic dance,” says Tatangelo, before going on to quote famed architect Louis Kahn: “A room is not a room without natural light.”

In almost every bathroom, a large skylight presides over the tub, flooding the room with unadulterated California sunshine. A clear celebration of light, materials, and, most importantly, self-care, other unexpected touches include custom soaking tubs, open showers, and limestone-clad walls.

“There is a moment when the sun enters through the bathroom skylight when you can feel the stillness and calm settle over you,” she adds. “That’s the sensibility we aimed to capture in the rooms.”

With surfer-chic vibes and dreamy ocean vistas to spare, it’s easy to see why Miley Cyrus dedicated an entire song to Malibu. The next time we return to the celebrity-approved city, you can be sure that this splurge-worthy oasis will be our coastal getaway of choice.

Nobu Ryokan Malibu is located at 22725 Pacific Coast Hwy, Malibu, CA. Nightly rates begin at $2,000 per night. For more information or to book a reservation, visit noburyokanmalibu.com or contact ryokan@nobuhotels.com.