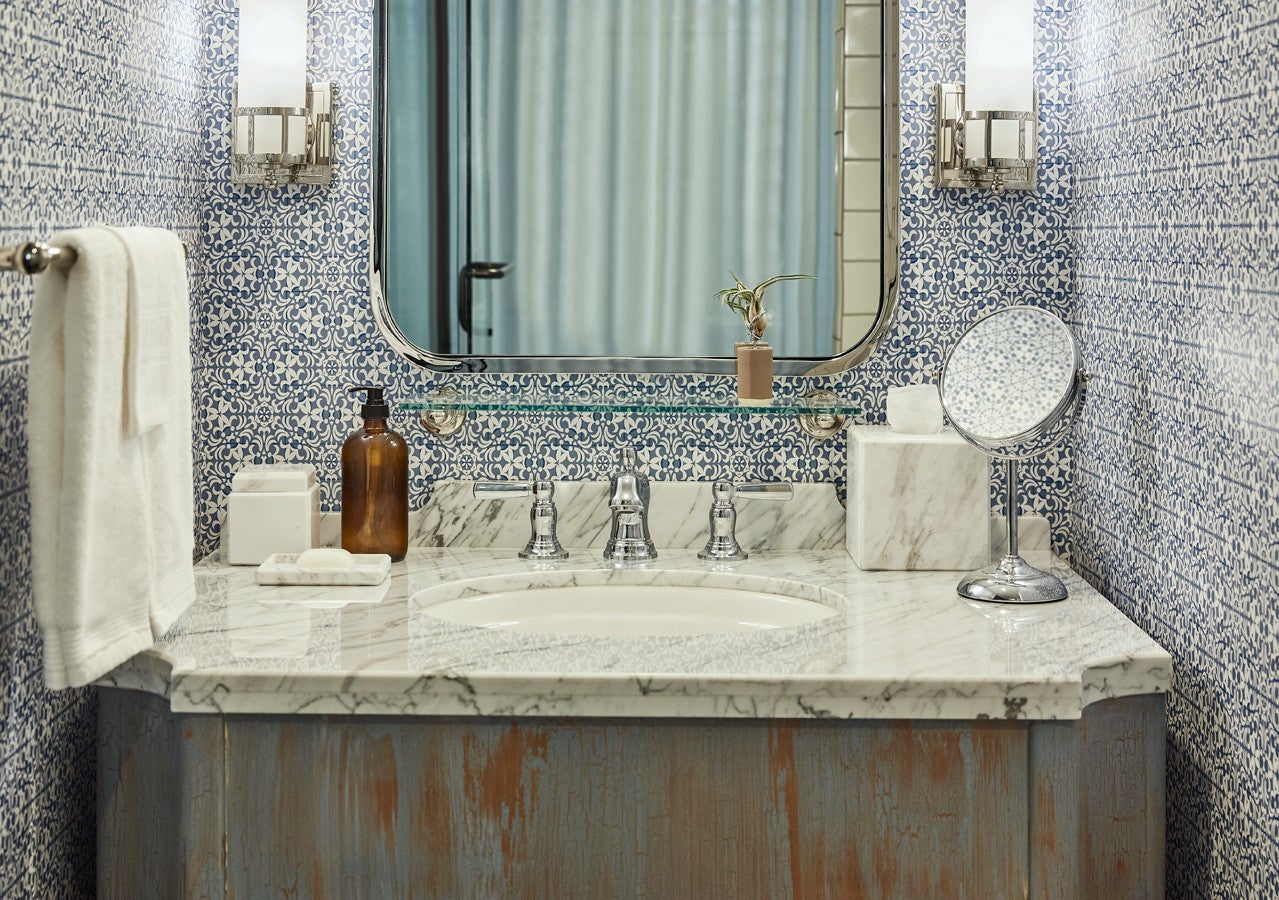 The Pendry is located in the middle of the Gaslamp Quarter of downtown San Diego. With a rooftop pool, spa, and fitness center and 317 spacious 350-square-foot guest rooms (including 36 suites), the property also boasts an in-house retail concept from the Alchemy Works team. And Pendry is just the first of the new boutique hotel brand of the Montage Hotel Group—next up is a Baltimore property.

The rooms, designed by Rottet Studio, feature brown-stained-and-painted eucalyptus wood, terrazzo, stainless steel accents, custom furniture, wallcoverings brass and blackened-iron metal accents in the custom light fixtures, and a soft-blue color palette. “The blues in the color palette are representative of those found along the Southern California coast,” says designer Ginny Hightower of Rottet Studio. “The sky, the water, the landscape all have varied shades of blue from the lightest of the light to the darkest of the dark. We wanted to bring a perception of openness, a quality inherent to the color blue, into the rooms.” Surf and California photography by Tom Adler curated by Archive-E, Fili D’oro luxury bedding, bath amenities by parfumerie MiN New York, and Waterworks bathrooms round out the offerings.

Food and beverage wise, there are so many options you don’t have to leave the property. Guests can have modern, coastal cuisine at Lionfish, Southern California-driven seasonal fare, shopping, and coffee at Provisional, light bites and poolside drinks at The Pool House, the perfect cocktail at Fifth & Rose, local craft beers at Nason’s Beer Hall, and nightlife at Oxford Social Club.

“Pendry’s style is for the curious traveler who appreciates art, design, culture and innovation but in a way that feels organic and authentic,” says the brand’s co-founder and creative director Michael Fuerstman. “The first opening is in San Diego, which has emerged in recent years as a formidable force in food, entrepreneurship, culture, and digital creativity while still maintaining its organic, beach city charm and low-key appeal. It has the creative, sophisticated appeal of an international city but the airy, relaxed approach that is signature San Diego.”

“The hotel interior is anchored in a classically refined setting with a sense of playful optimism,” says Rottet Studio partner Lauren Rottet. “The rooms feel warm and comfortable with a combination of furniture inspired by both stately European elements and modern revelations set by the cadence of contrasts witnessed throughout the hotel.”

“The combination of rich elements from San Diego’s history as a Spanish mission inspired the custom wallcovering for the bathroom area,” says designer Ginny Hightower of Rottet Studio. “A custom vanity design pulls inspiration from the California surf landscape heavily informed by lighter colors and sunwashed materials to create an warm and airy space.”

“The first clue that guests aren’t in an ordinary hotel is the perception of size and openness generated by a transparent glass and steel shower enclosure that opens up the bathroom to the entire room,” says Rottet.

“The all-day dining concept, Provisional Kitchen, Café & Mercantile, on the ground floor, captures the spirit of a building with a long lineage,” says Rottet. “The grand, two-story space is organized into three bays separated by large, fluted columns that support a ceiling of traditional coffered panels. These spaces, while visually connected, define a retail zone, show kitchen, and a quieter seating group.” The space is also home to a retail space curated in partnership with Raan and Lindsay Parton of Alchemy Works.

“A defining feature in the guest room is a custom wall covering that continues the precedent of presenting the expected but hiding the unexpected,” says Rottet. “Surf-inspired imagery camouflaged within a dense traditional pattern only becomes apparent once the guest slows down to rest.”

“The marriage of contrasting sensibilities fills the space with a collection of classically inspired European furniture and design while injecting the fun youthfulness of the Californian spirit,” says Hightower.