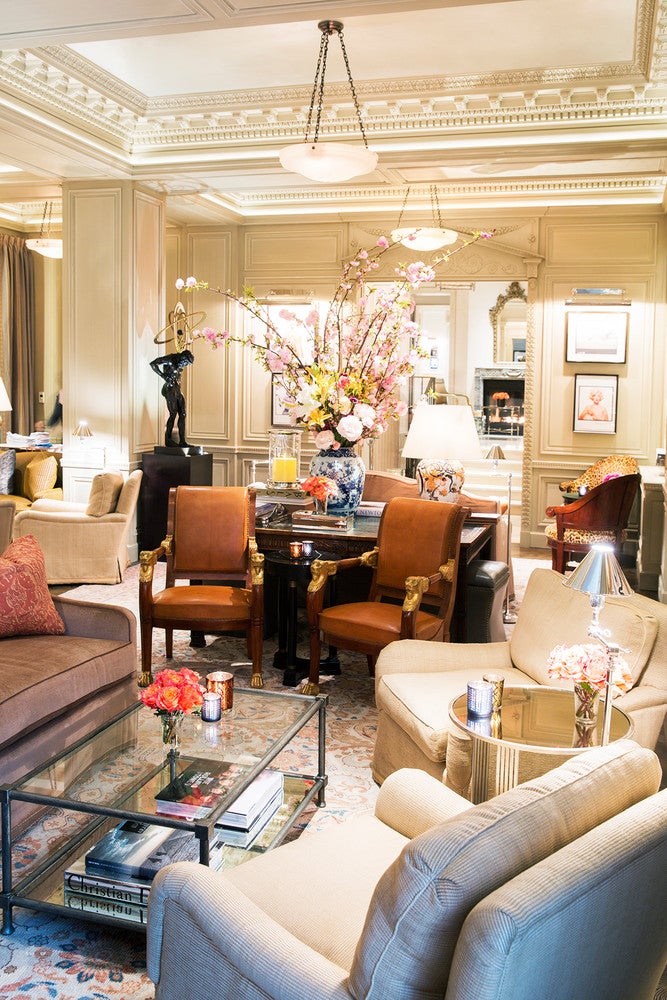 Michael S. Smith, who’s decorated homes for such luminaries as President Barack Obama, Harrison Ford, Rupert Murdoch, and Cindy Crawford, knows a thing or two about great design. And as a jet-setting world traveler, he knows his luxury hotels inside and out.

The Lowell, a privately-owned 74-room hotel on Manhattan’s Upper East Side, is one of Smith’s favorites and became a client of his 10 years ago. He recently completed work on the hotel’s suites and its brand new in-house restaurant Majorelle.

“The Lowell is special because of its size,” says Smith. “It’s very small and feels almost residential with a real concentration on service. People feel at home there.” The L.A.-based designer was inspired by Neoclassical design for this project.

“Part old school New York, part super elegant with lots of references to l950s and 1960s design and the idea of a really grand hotel,” says Smith. Does the designer who has stayed in almost every room at the intimate hotel have a favorite? “Each has its own eccentricity and special features,” he says diplomatically.

After being a hotel guest for many years, Smith was tasked with modernizing the hotel’s suites over the last three years. “I have been working on renovating various suites in the hotel for many years,” says Smith. “When they decided to do this renovation, they asked me to be part of it from the beginning.”

Smith wanted to bring a cohesiveness to the designs of the suites and its public areas. “The spaces weren’t connected to the DNA of the hotel so it was important to reimagine the public spaces to be classic and timeless and evoke the design sense of the rest of the hotel.”

One of the most important spaces is the just-opened Majorelle, a new restaurant by La Grenouille alum Charles Masson, on which Smith collaborated with architect Mark Pinney. “Some of my favorite design choices include the beautiful Emilio Thierry marble floors and the French paneling in the bar and club room, which is magical because it makes the space look like it has been there forever,” says Smith.

The floor was created from Botticino Classico blue and white marble blocks from a mountain-side quarry in Botticino, Italy. And the restaurant has three distinct areas: Jacques’ bar has an Art Deco feel with metal-framed doors lined with panes of mirror and glass, embossed leather-paneled walls, and Féau & Cie French Oak woodwork; the Club Room lounge features handcrafted crown moldings, French Oak parquet flooring, and hand-painted paneling; and there’s a glass-covered garden with lush plantings, fountains, and a fireplace.

Dramatic vaulted ceilings, marble columns, etched glass work, and alabaster chandeliers round out the architectural elements of the ornate rooms.

The menu is authentically French with Mediterranean and Moroccan flavors (think thyme roasted chicken and baby vegetable tagines). “I love the subtly-Moroccan fare,” says Smith, who also loves the scrambled eggs that room service whips up for him in the hotel. “I’ve tried many things on the menu, and they’ve all been delicious.”