The 7 Design Innovators Behind Our Favorite Hotels 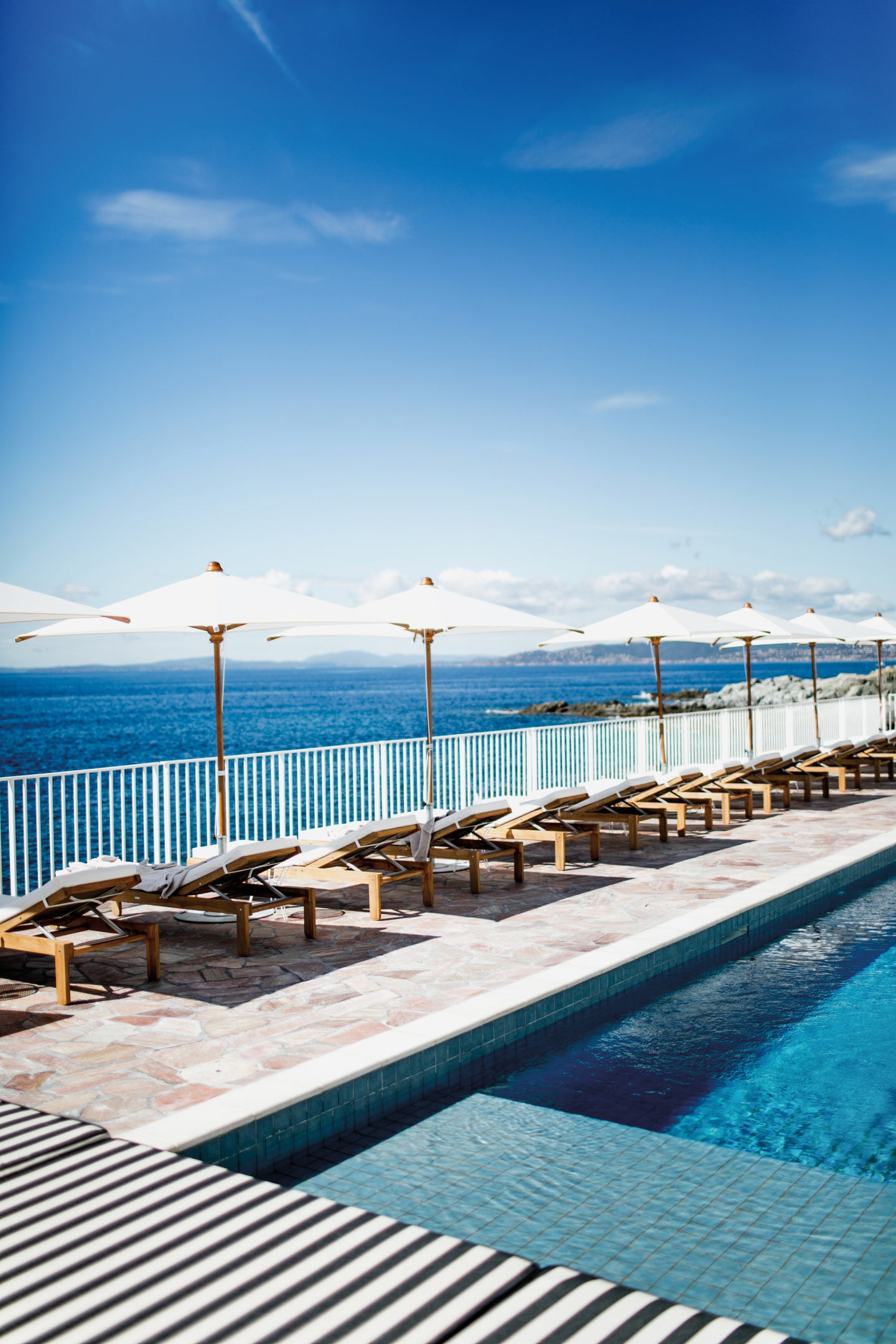 This story originally appeared in the Summer 2019 issue of Domino, titled “Hotel Hitmakers.” Subscribe to be the first to receive each issue.

A new wave of creatives are channeling their distinct design perspectives into genre-defining hotels. We got the inside scoop from some of our favorites that will give you major inspiration (and serious wanderlust).

Since 2000, the multi-hyphenate Studio Be-Poles has worked with leading hotels, from the NoMad’s New York City, Los Angeles, and Las Vegas outposts to the now iconic Hôtel Les Roches Rouges, a joint project with Festen. With offices in New York and Paris, the duo has mastered the art of “narrative storytelling,” bringing spaces to life through architecture, art direction, and smart branding. Childhood friends and longtime collaborators Antoine Ricardou and Clémentine Larroumet found “a perfect demonstration of our craftsmanship” in Le Barn—a new pastoral hotel, restaurant, and spa outside of Paris. Named for its crimson utilitarian structures, the property was inspired by sheds Ricardou saw while cycling through Rambouillet Forest on Saturday mornings.

Travel Tip: Lounge Like a Local Ricardou emphasizes the importance of experience in design. “Today you can create an amazing space,” he says, “the experience is completely ruined if the coffee was bad.” To establish a consistent voice, Studio Be-Poles uses architecture, design, and art to “bring you to the narrative, just like a movie script.”

Manchester, England, might not be known for palms and rattan, but the new Whitworth Locke—part of the boutique Locke aparthotels brand—invites guests into rooms painted sunny yellow, rosy pink, and fern green. Its architect-design firm, New York–based Grzywinski+Pons, has earned accolades for warm spaces in gray-sky cities. Next up: various London projects in 2020, followed by a Locke hotel in Berlin in 2021. Despite the tropical vibes, each property has a sense of place—the pastel palette at Edinburgh’s Eden Locke reflects the local stone and northern light, for example. “Hotels are not just for the world to meet a city,” says Matthew Grzywinski, “but for a city to meet the world.”

Travel Tip: Look for the Light Grzywinski uses London as a home base for European projects and travels frequently. From place to place, he notices the changing quality of light. “In Edinburgh,” he says, “there’s a warm, low horizontal light. The New Town’s monolithic, monochromatic buildings are gorgeous against it.”

A lifelong Parisian, Dorothée Meilichzon expertly preserves the spirit of old spaces within the march of modernity. She’s well-known for reimagining Art Nouveau and Art Deco buildings as hip hotels in the historic Arrondissements of Paris. Recently, she worked in Venice on the Il Palazzo Experimental, a hotel that combines classicism and Italian Memphis-inspired details inside an ancient mariner’s house on the Giudecca Canal, adding “bright colors, brushed aluminum, and scalloped edges.” Meilichzon is also designing the soon-to-open Menorca Experimental—off the coast of Spain—as “the summer house of an imaginary artist.” There, a present-day Mirò or Picasso might be found sketching in the stone-walled gardens.

Travel Tip: Live the Life Aquatic For each of her projects, Meilichzon seeks out moments that can’t be experienced anywhere else. In Venice, she commuted to work in a motoscafo—a Venetian motorboat that taxis passengers through the canals. “I’m really obsessed with the presence of water and its changing color and the views of the laguna [Canal della Giudecca] from the hotel. It makes Venezia magic.”

No one better understands the give-and-take between hospitality and home than Christine Gachot, a frequent traveler who—alongside her partner, John—helms New York–based Gachot Studios. “I use a hotel lobby as if it were my living room,” she says. “I’ll sit on the floor at a coffee table, have a glass of wine, work on my computer, or (hopefully) not.” For the new Shinola Hotel in Detroit, she created a soaring common room, decorated with the custom-made color Shinola Blue, which appears everywhere, from the upholstery and tile to artwork curated by Library Street Collective. Currently, Gachot is behind the calm, cream-hued interiors for Manhattan’s Pendry Hotel (opening 2021) and emerald greens for an upcoming boutique property in Hawaii. “I’m also designing a home,” says Gachot, “and the client wants all the bedrooms to look like hotel suites.”

Travel Tip: Join the Club Gachot and her friends created a “hotel club,” in which members take turns choosing where to stay on their travels. Home House, a private club in London’s Marylebone neighborhood, is one of her favorites. “I once left a ring there, and they had it FedEx-ed to me, beating me back home,” she says. “Service is the true sign of a great hotel.”

In 2014, when design studio ASH NYC opened its first-ever inn—The Dean—in a century-old Providence, Rhode Island, landmark, they saw a disconnect between the city’s cultural cred and its lack of boutique hotels. CEO Ari Heckman says the experience galvanized the team to transform “historic buildings that were pretty much abandoned” into neighborhood assets. In 2018, they christened The Siren Hotel—a moody, jewel-toned grande dame in Detroit’s iconic Wurlitzer Building that chief creative officer Will Cooper describes as a “tall, slender figure calling people back to the city.” After the four-year restoration of a New Orleans church and convent, ASH NYC opened Hotel Peter & Paul, where custom candles smell of ecclesiastical incense. Across projects and places, “we’re offering something with a soul,” says Cooper.

Travel Tip: Stop and Smell the Roses For Cooper, travel evokes a sensory experience. Each hotel the firm develops has its own scent. For the Siren, he worked with Régime du Fleurs to craft candles and room sprays with iridescent floral notes. “It’s an old-world, feminine scent that reminds you of your grandma…but not too much,” he says.

Avi Brosh has been busy. The CEO of boutique hotel brand Palisociety, he has four properties opening in 2019—including one in San Francisco and two in Los Angeles. With six hotels in the latter city alone, the question that guides every project is: “Can we do something special in the local neighborhood?” For Palihotel Culver City, Brosh renovated a 1920s Art Deco boardinghouse into an “unapologetically eclectic” mélange of floral, striped, and plaid patterns against a background of warm woods and rich jewel tones. (Even the exterior is splashed in colorful blooms.) “I’m into layering spaces and I’m into stories, not themes,” he says. “From a design perspective, our hotels need to have street cred.”

Travel Tip: Lounge Like a Local A self-taught designer, Brosh sees his properties as a diary of local influences, from 1920s cinematic style in Culver City to Art Deco pinks and pastels in Miami Beach. His must-haves in a hotel? “Homegrown design, a great little café, a bar, and a pool area,” he says. “Somewhere you can hang out that doesn’t take itself too seriously.”

Robert McKinley starts every project with a playlist. For a stately, classical hotel he’s currently working on in Kingston, New York, he is listening to Grace Jones and the Kinks. For a pair of nonchalantly minimal bungalows in Montauk, which he collaborated on with his wife, Kate Nauta (above), it was Willie Nelson and Mulatu Astatke. “A hotel is similar to a movie,” he explains. “I think about how I want someone to leave—whether they feel pensive, melancholy, uplifted, or ambitious.” Known for creating refined but relaxed getaways, like Laguna Beach’s Hotel Joaquin and Montauk’s Surf Lodge, McKinley recently gave himself free range to design a beach house where everything is for sale, from East Fork pottery to Wright bedding to the home itself. “People can visit Montauk and try before they buy,” he says.

Travel Tip: Seek Inspiration Everywhere “My inspiration comes from places outside the design world,” says McKinley, who worked for Giorgio Armani and Donna Karan before opening his interiors firm. “I pull hardware, upholstery details, and color stories from fashion, and I look to music for feeling.”