A colorful slice of the Mediterranean, found in the most unexpected of locales. 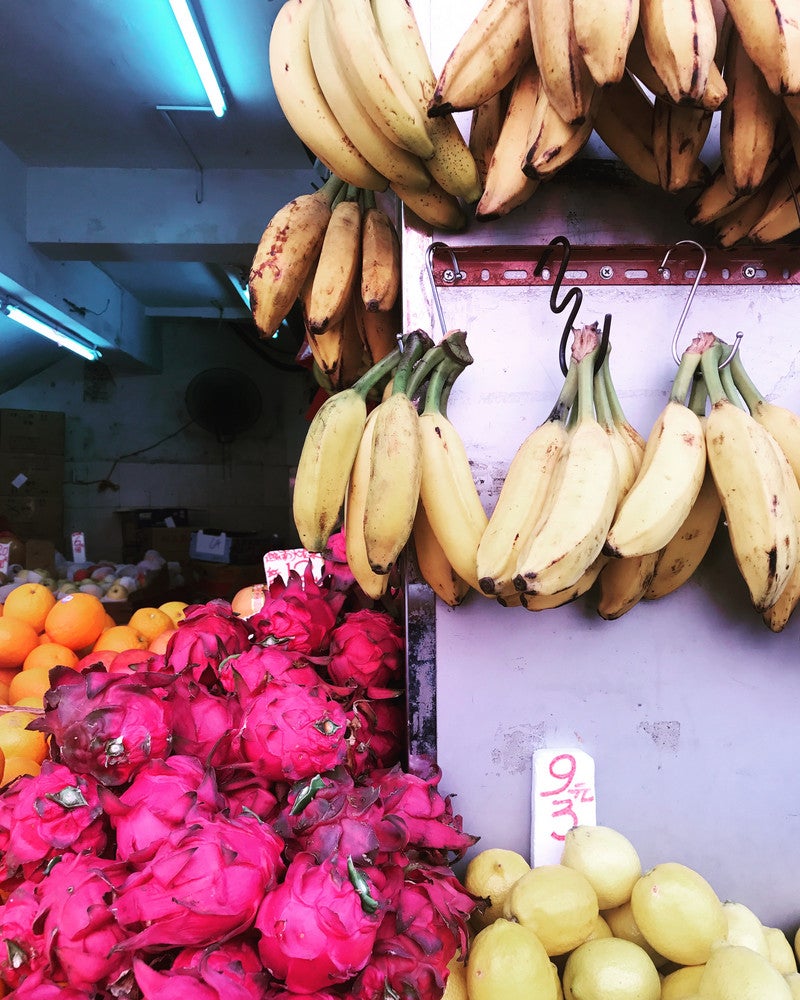 The vibrant produce available at the Red Market.  . Photography by anna kocharian

Chances are, you’ve probably never heard of Macau, the autonomous region situated on the southern coast of China—more informally known as the Las Vegas of Asia. I’ll admit, prior to my visit there, I knew next to nothing about it. Located across the Pearl River Delta, just a 50-minute ferry ride from Hong Kong, Macau has undoubtedly existed under its shadow—although as of late, the latter’s rapid growth and development has helped usher the region into the global spotlight.

For nearly 500 years, Macau was under Portuguese rule—up until 1999, when it was deferred back to Chinese sovereignty—remnants of which are still ever-present in the region. The official languages are Cantonese and Portuguese, from which a dialect has fused, known in present-day as Macanese. Today, the resort city is more notably known for its dominance as the gaming capital of the world, welcoming millions of visitors, from across the globe, each year. But a far cry from the glitz and the glamour of the Cotai Strip (akin to that of the one and only Vegas Strip) is a relatively under-explored world encapsulated in history, rich in culture, and fruitful in gastronomy and design.

Read on to get the lowdown on where to go, what to eat, and everything to see in Macau.

As with any flourishing city on the brink of a major cultural and artistic revival, you can relish in the fact that the design-minded will have made their mark—the array of chic design boutiques, Scandinavian-esque coffee shops, and hotspot eateries are simply proof.

SIGNUM, Rua do Alm. Sérgio no. 285, R/C  Seletti, Tom Dixon, and HAY, are only a handful of the style-savvy brands you will come across at Signum. Boasting an impressive array of eclectic items that touch on all things interiors and design, you’ll find that the shop boasts a curated scope of essentials, sought through a roughly fresh perspective. Sprinkled in within the modern decorative offerings, an eclectic slew of quirky pieces and vintages treasures, which you will undoubtedly have a hard time leaving without.

Vintage Market, AI Block, Paterson Building, 22-A St. Paul’s Street Featuring finds curated from all across Asia, Vintage Market is a thrifter’s dream. From its inconspicuous facade to the rows of rad clothing and accessories inside, this hidden shop is a real treat for the senses.

Mercearia Portuguese, Calçada da Igreja de São Lázaro nº8  Dubbed as “The Portuguese Corner Shop,” this one’s located in the famed St. Lazarus district, off the center of a dreamy courtyard. The shop carries various imported goods—we’re talking everything from canned sardines to ceramics—straight from Portugal, offering up a little taste of the Mediterranean in Asia.

Re-Elements, No. 10, Shun Lee Building, St. Andrew’s Street For the eclectic-enthusiasts, a shop that will cater to your deepest inclination of whimsy. This home goods store also stocks up on various accessories (both decorative and fashion) highlighting the avant-garde and ultra contemporary in form. Pop in for playful finds and tiny trinkets that will serve as the ultimate travel memento.

On the culinary front, it’s all about the vibrant flavors, which have resulted from the mix of cultures present in Macau. It’s safe to say that when your national kitchen seamlessly integrates the cuisines of two wildly different nations, you’re bound to end up with one very unique experience.

Albergue 1601, 8 Calçada da Igreja de São Lázaro   Situated in the picturesque district of St. Lazarus, Albergue, a traditional Portuguese eatery, is located in a tree-covered courtyard, often the center of one of Macau’s many artistic installations. The food is as heart-warming as the ambience, thoroughly encapsulating the senses.

Nga Tim, 8 R. do Caetano   Take a day trip to the beautiful fishing village of Coloane and immerse yourself within the local culture. Nga Tim is a quintessential hallmark of Coloane—and arguably even Macau—where you’ll often find locals dining al fresco. Order the grilled sardines, crispy beef noodles, and a fresh coconut on the side.

Long Wa Teahouse, 3 R. Norte do Mercado Alm. Lacerda   Conveniently situated across the street from the famed Red Market, Long Wa Teahouse is a Macanese institution. Decked as a traditional 1960s Chinese tea house, the spot’s laissez-faire attitude complements the sun-drenched interior, where one can feast on dim sum to their heart’s content.

Litoral Restaurant, Rua do Almirante Sergio, 261A   At Litoral you’ll find that a quintessential fusion of the two dominant cultures of the region presented by way of an eclectic menu that boasts the very best of Chinese and Portuguese cuisines.

KAFKA, No. 152, Prague Street, Taipa   Satisfy your sweet tooth at this charming spot, where a slew of indulgent treats and gourmet eats will surely satisfy.

Pro Tip: Stop by Traverses da Se, a famed destination dubbed as Macau’s “snack street.” At first glance you’ll find rows of compact food stalls, seemingly offering up the same sort of street food, but look deeper and you’ll be surprised by the array of Michelin-starred spots, offering quick bites that will rival any of the region’s 5-star restaurants.

For design-lovers who thrive off of inspiration found within a natural setting, Macau boasts no shortage of that either. The region’s historical ties to Portugal are at the root of it, providing ample opportunities for inspired moments, beautifully scattered throughout.

Take a stroll through town and you’ll notice paths paved with shards of tile, reminiscent to that of a traditional Portuguese variety. In the early days, when the Portuguese would make their way to China for trade, they would fill their near-empty ships with shards of broken pottery (in effort to hold weight) and would later dump them in the streets of Macau upon docking. While the Portuguese took back textiles and various other goods, the Chinese would utilize the leftover pottery shards to pave their streets. Hundreds of years later, fragments of the ancient tiles can still be found scattered throughout, offering a glimpse of Macau’s not-so-distant past.

Along the same vein, Macau’s affinity for art and color is a prevalent presence of the region. Whether it’s found contemporary in form, by way of the architecturally bold structures dominating the skyline, or the ancient temples clad in the most saturated of hues, you’ll find yourself pleasantly immersed in the multifaceted culture, prosed in an ever-growing revolve between the old and the new.

The Ruins of St. Paul’s Macau is home to 30 UNESCO sites, among the more notable being St. Paul’s, the first church in China. Today, the only remnants of the church come by way of a free-standing facade, boldly set in the midst of the city center, an unwavering ode to Macau’s rich history.

Red Market Immerse yourself in the local culture and head over to the Red Market (125 Av. do Alm. Lacerda)—you’ll be pleasantly overwhelmed by the abundant array of colors. Tropical fruit, fresh fish, and dried goods fill the stalls of this indoor/outdoor market that’s buzzing with life, set in the bustling city center.

Hac Sa Beach Also known as the Black Sand Beach, Hac Sa is yet another gem that Macau has to offer. The drive over takes you along lush terrain, winding paths lined with palms and vibrant greens, all leading down to a vast opening with views that are simply incomparable. Situated in the quaint village of Coloane, Hac Sa is the largest natural beach in Macau.

A-Ma Temple On the southwest coast, you’ll find A-Ma Temple, Macau’s namesake, built in dedication to the goddess Mazu of the sea—a tribute to Macau’s long-standing history with fisherman, who would pray to the goddess before and after their journeys.

Guia Hill and Flora Garden  This isn’t your ordinary park. Flora Garden, which is situated on the foothills of Guia Hill—home to the 17th-century Guia fortress—boasts an impressive array or lush greens and quaint pathways leading up the hill where one can indulge in the breathtaking, panoramic views of Macau. Along the way, you’ll find locals engaging in various forms of physical activity, from tai chi to croquet, and everything else in between. Don’t forget to take the cable cars on your way down, for even better views.

Macau’s coffee culture is a strong one, rivaling that of Brooklyn’s or any standard Scandinavian locale. Pop into any one of these spots and you will be greeted with the nostalgic aroma of freshly-brewed coffee, pastries that encapsulate Macau’s rich history, and a clientele that resembles one you would find in any other corner of the world.

Quarter Square, 89 Largo Maia de Magalhaes  Fresh coffee, good design, and one too-cute-for-words resident bulldog (who you’ll often find perched on a lounge chair in the corner of the shop) are just a few of the reasons why Quarter Square is designated as a must-see. Situated in Taipa, the spot doubles as a showroom and gallery, boasting a constantly revolving slew of contemporary design.

Wonderwall Coffee, Rua Do Volong, No.54 Yet another gem found in the district of St. Lazarus. Stroll along the neighborhood’s cobblestone streets and Wonderwall’s blazing neon sign will instantly draw you in. Aside from the fresh brews and mouthwatering eats inside, the cafe also doubles as spot for live music.

Single Origin, Rua de Abreu Nunes 19 R/C A pour-over and espresso bar, this two-floor establishment is perfect for grabbing a coffee while on-the-go. Have more time? Snag a seat at one of the charming indoor/outdoor tables—it’s the ultimate spot for people-watching.

Sugar Coffee,  Rua de S. Paulo, No 33A The Scandinavian vibes are strong with this one, going right down to the chic, subway-tiled exterior. Grab a coffee soda (that’s espresso, sparkling water, and a lemon) for an ultimately refreshing treat.

Whether you’re traveling to Macau for the food or the sites (or embarking on a weekend-long excursion from Hong Kong), you can relish in the fact that you’ll find yourself emerged in a culture and atmosphere unlike any other. From the region’s deeply-rooted history to its emergence as a hotspot destination that will soon come to rival its contemporaries, it’s one destination you won’t want to miss out on.