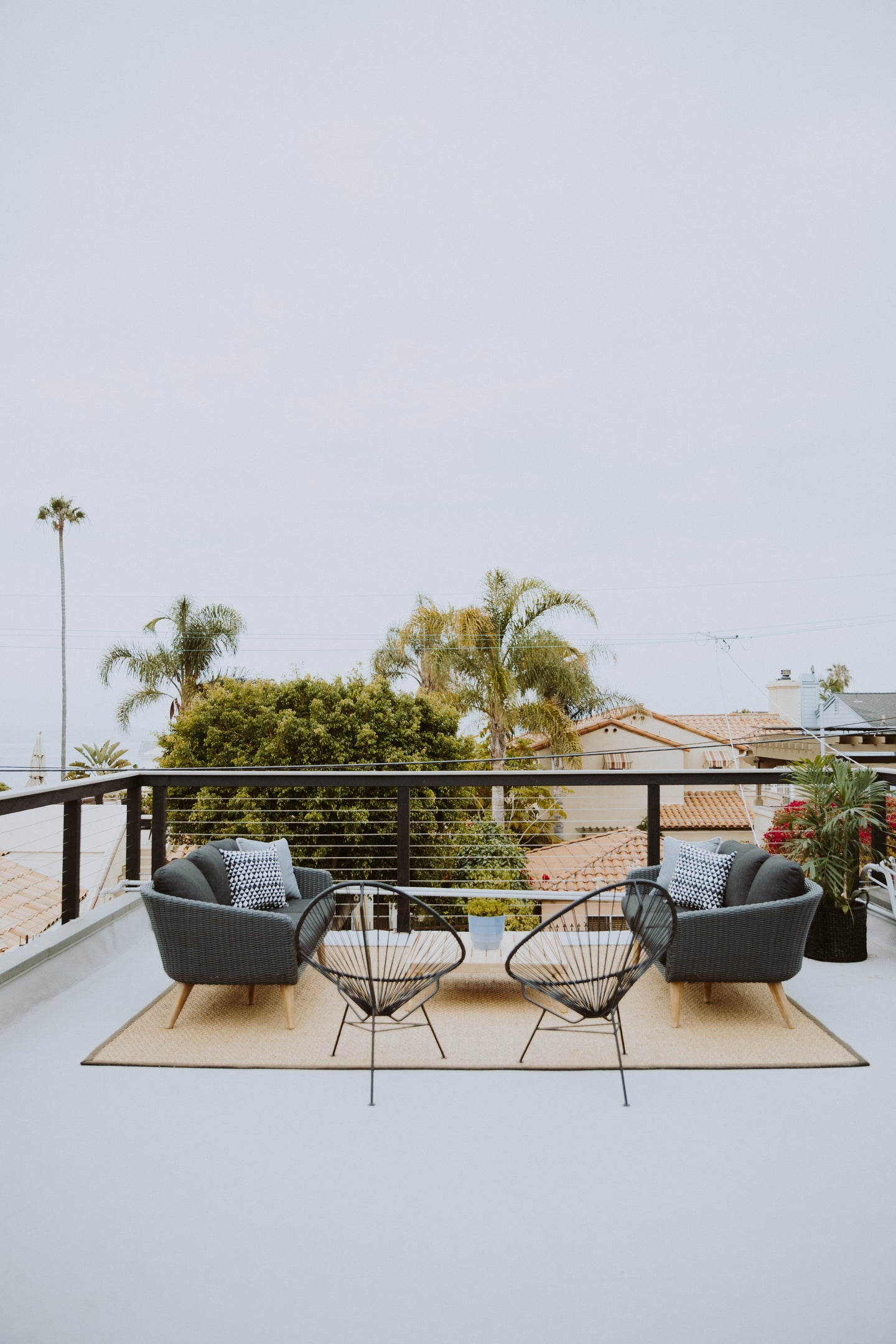 Since first capturing our decor-loving hearts with its signature laid-back demeanor and breezy, beachy vibes, California-cool has taken a number of new and inspired forms. Chief among them? The rebirth of the surf shack. A pioneer of sorts of the “surfer-chic” movement, Katie Gebhardt, owner and principal of Solstice Interiors and the designer behind the world’s first hard kombucha bar, has long been influenced by the ease of coastal living. The San Diego native’s most recent project—a tiny beachside bungalow located in the Bird Rock neighborhood of La Jolla, CA—perfectly encompasses the relaxed and casual way of life along the Pacific.

“It has an insane view,” says the designer of the three-bedroom, two-bath, which sits just two blocks away from the ocean. Proximity to the water was, of course, the biggest draw for Gebhardt’s client, Kevin, an old friend from college who, after years of renting the bungalow, decided to make the home his own.

“He had actually rented the place for years—all throughout college—and it was always just a bachelor pad. A bunch of guys have always lived there,” recalls the designer, who was tasked with gutting and redesigning the 1,500-square-foot spread, a space the home’s owner currently shares with two other guys. “I tried to keep it pretty masculine and very surf inspired—they’re all surfers.”

Without altering the home’s original footprint or tearing down any walls, Gebhardt gutted both of the two bathrooms, as well as the living room and kitchen. Outside, she gave the exterior a much-needed cosmetic refresh. “The outside was [painted] this disgusting monster green and purple that was chipping away. It was so gross,” notes the designer.

Organic textures and earth tones played a major role in the redesign, which brings together reclaimed woods, matte black finishes, and warm neutrals—just three elements that make up the certain je ne sais quoi that has come to define the look and feel of the modern day surf shack.

“[You want] to keep things super natural and organic and light and bright, and then add in accents and textiles,” Gebhardt tells Domino of mastering the relaxed aesthetic. “In this space, in particular, we kept it more on the modern side and a little more masculine with clean lines and a very clean palette.”

Unique decorative touches, like the vintage rug and rattan lounge chair in the living room and olive green vanity in the guest bath, extend a more personal edge to the tiny, one-level bungalow.

“I knew right off the bat that I wanted to do an olive green bath vanity. I’ve been dying to do one. I also wanted to do a fun pop of pattern with the floor tile because I knew it was going to be pretty black and white everywhere besides from the olive green. Then I added that wood round mirror with the leather strap to kind of warm it up so it wasn’t so stark,” explains the designer.

While Gebhardt wasn’t creatively confined by a crazy tight budget, the designer made an effort to cut costs where possible. Opting for more affordable backsplash and tile materials (all of which she sourced from Home Depot for this project, with the exception of the master bath floor tile, which she snagged at a local tile shop) in the kitchen and bathrooms was just one way she intended to maximize the budget.

“[In the bathroom], the shower walls are the majority of your tile, so using a

will keep costs down. Then, you can splurge on things like mirrors, lighting, and hardware,” she explains. Case in point: Invest in the finishing touches. Chic tile doesn’t have to cost a fortune!

In the master bathroom, Gebhardt committed to the black and white scheme, picking a “cool and timeless” floor tile that would pick up on the black hardware and gray vanity.

Considering subway tile wasn’t the designer’s first go-to choice for the shower, she decided to keep things visually interesting in the guest bath by flipping the tile vertically. “Subway tile is so overdone in my opinion, but it’s just so cost effective and there are things you can do to keep it interesting.”

Of course, the real star of the home is the patio. Given that the outdoor space is almost as large as the interior, Gebhardt notes that it would have been easy to design a number of smaller, separate lounge spaces. Instead, however, she decided to keep the space as functional and flexible as possible.

“They’re always entertaining, so they just wanted one main lounge zone for people to interact and have good conversation. We thought about having a dining table out there, but they really wanted to keep it open so they could just roll out yoga mats and do yoga out there, workout, or play cornhole. There’s a lot more room for activities,” says Gebhardt.

Clearly never short on inspiration, we had to know: Where is the designer currently seeking inspiration? “Honestly, San Diego. I was born and raised here. I love just walking around my town and seeing the beautiful beach community. Everyone is so amazing and friendly here,” she reveals.

Gebhardt also admits she’s been taking major design cues from her fellow, surf-loving Aussies. “I feel like they’re just doing everything right! I really love this designer, de Court Design. They’re actually out of New Zealand, but their Instagram is just my inspiration central. It’s so cool.”

A High-End Living Space Made Entirely From Trash

Timothy Goodman’s NYC Home is Giving Us ALL the Feels