And jewel-toned walls that took six months to decide on. 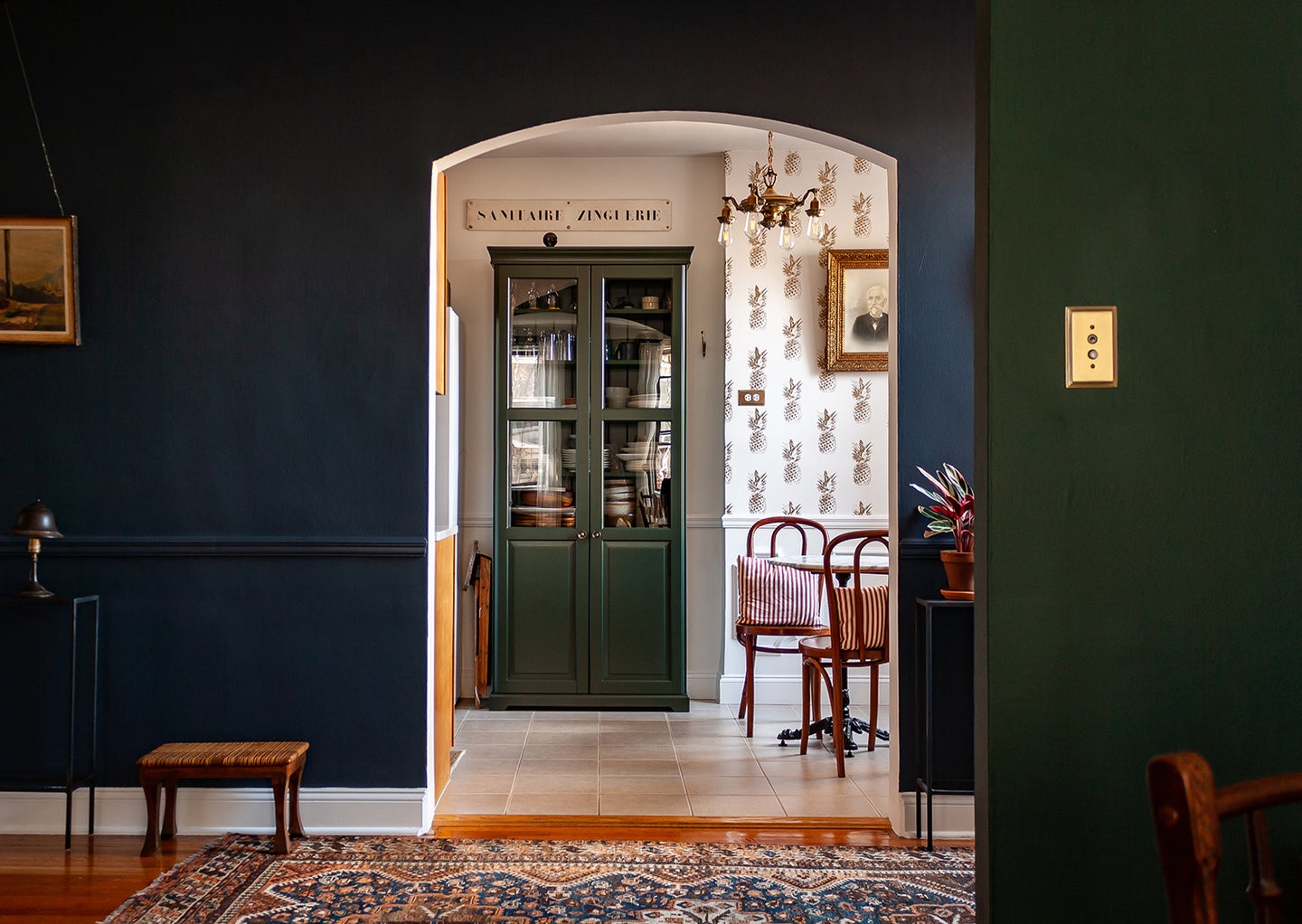 It’s taken every one of the four years since Matthew James and his partner, Casey, moved into their Ditmas Park, Brooklyn, co-op in 2017, to get the apartment to their liking. But as every design enthusiast knows, the work is never done. In fact, they still swap the table lamps and restyle the shelves, adapting the space to their every mood.

What’s now a Parisian-esque world of antique seating and saturated paint choices (emerald green in the living room; a rich navy in the hallways) wasn’t always so. The original space relied heavily on dim overhead lighting and the rooms felt claustrophobic—aided in part by cherry red walls and an oversize black leather sofa left by the previous tenant.

Knowing this would be their forever home (how often do you get light from all four directions in New York City?), James was determined to have the apartment reflect both his love of French cafés and his partner’s sleek mid-century sensibilities. Here are our favorite elements from the radical transformation.

Do Spend It All in One Place

The age-old sentiment was thrown to the wayside when James renovated the kitchen. By keeping the existing lower cabinets and preserving the original layout, he was able to spend almost their entire budget on the white marble countertops. (James liked the timelessness of the material and how it complemented the marble-topped bistro table.) “The counters were one of those things that, while we used the existing cabinets, gave the kitchen its own voice,” he says. “There’s now a sense of perspective.” The previously cramped turquoise space is unrecognizable thanks to the addition of open shelving (made from the marble offcuts) and a fresh coat of white paint.

Living in an unfinished place for months can be stress inducing to say the least, but for James it was a chance to curb his indecision. The pineapple stencils in the dining nook (wallpaper was too expensive) were only on one portion of the wall for nearly an entire year before he decided to finish them and bring in some chairs. “We lived with things for a while, trying to make sure they worked,” says James. “There was a lot of trial and error.” And if he ever grows tired of the fruit motif, he can paint over it.

But the easygoing timeline didn’t apply to every project. Despite starting the kitchen on a whim one September, James quickly realized that he had a hard deadline of Thanksgiving dinner in just two short months. “It was a lot of late nights looking up how much a slab of marble weighs to make sure the walls would hold,” he remembers. Luckily the turkey had a table to be served on, but James doesn’t recommend a whirlwind reno. “I underestimated the amount of research we needed to do, so everything was happening in real time,” he says.

Because the apartment had so much natural light, there was no need to maximize sunshine with light walls. James had the entire color wheel to choose from, but the endless possibilities were overwhelming. “The blues for the hallway were swatched on the wall for maybe six months,” he says, laughing. He landed on an inky navy—and a moody green in the dining area—to add depth to the abundance of natural wood in both spaces. The bold hues also accentuate the prewar’s divided floor plan, a cozy selling point for James.

Rather than let a bunch of unwanted furniture pieces pile up in the apartment, James resold them before finding something new, often recouping as much as he spent. What started as an attempt to save money became a never-ending game of swap. The couple’s first mid-century sofa in the living room was traded for an antique settee, while the kitchen’s storage dresser was exchanged in favor of a forest green display cabinet. “We went through maybe five dining tables,” he says. “Aesthetics was so much less important than how we were living with the pieces.” The winning bistro table, round-topped with iron legs, makes the nook a place the couple want to hang out in—somewhere that acts as an additional cooking space but also a place to enjoy coffee in the mornings.