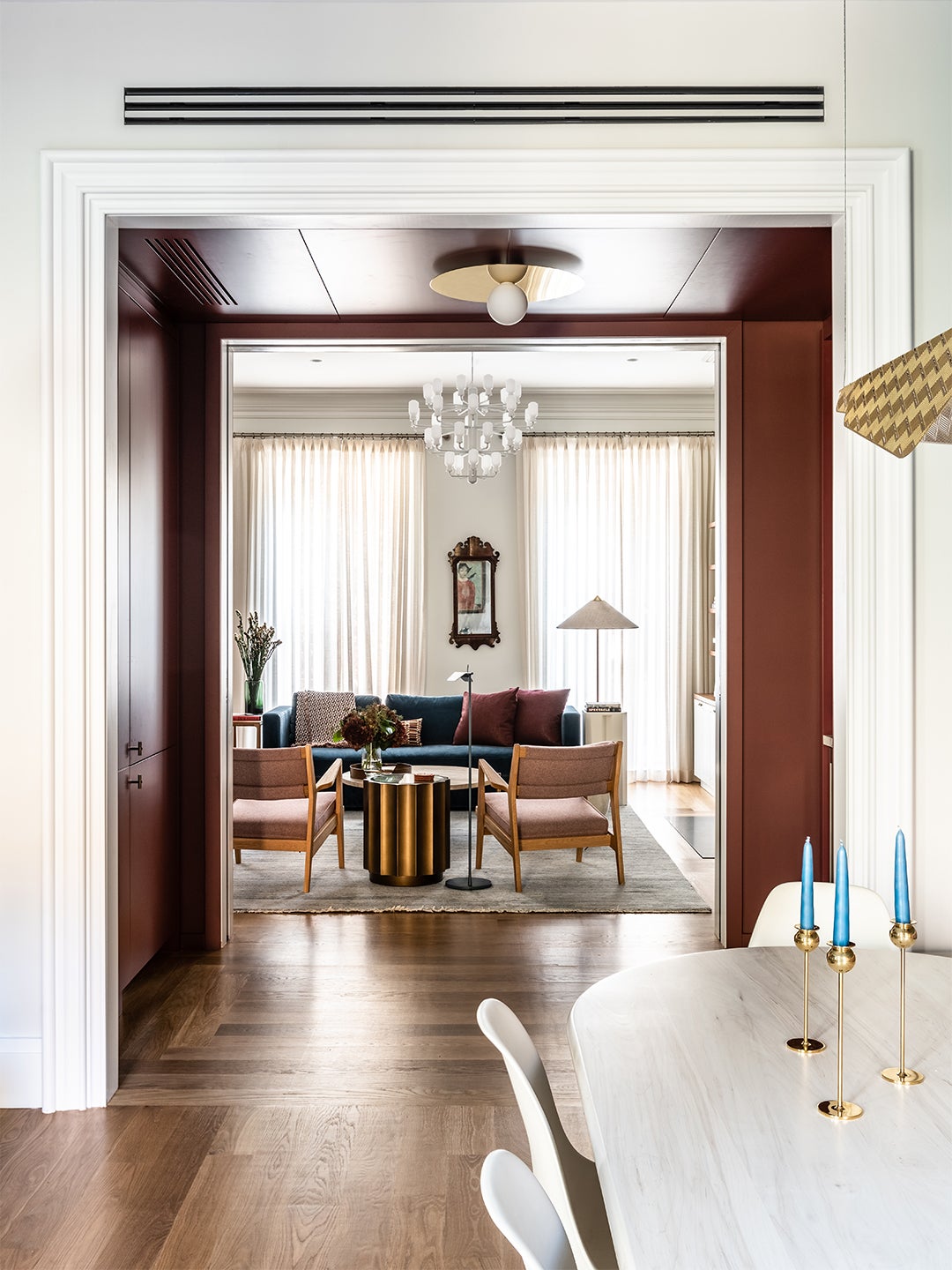 The kitchen is the heart of the home, unless said abode is a Brooklyn brownstone. In that case, the staircase easily steals the title. Swooping handrails, ornately carved balusters, sculptural newel posts—these features are a big part of what make New York City’s prewar gems so covetable. So you can only imagine how hard of a decision it must be to tear it out and start from scratch.

Yet this Boerum Hill brownstone’s staircase was already in rough condition when architect Joshua Keay of Eponymous AD came on the scene back in 2019, and it was even worse after a construction crew had trekked up and down over the course of two years. “It seemed like a no-brainer,” says Keay, who worked closely with interior designer Anne Brewer of the firm Lewis Birks to refurbish the townhouse for a young family. “It was leaning and creaky and tipping,” he recalls. “In the end, it wasn’t all that much more expensive to replace the staircase than it would be to monkey with it.”

Fortunately, the handrail, spindles, and newel posts were salvageable (they were refinished and painted), but this is tough choice that need to be made when transforming a historic space. To save or to gut? That is the question.

The rest of the big moves happened on the parlor floor, or the first floor of the single-family home (the ground level is a separate apartment that the homeowners rent out). The living and dining rooms were positioned at the front of the house, but they were all very square shaped, leaving only room for a narrow cooking zone at the back. “It was just a series of countertops,” Keay remembers of the original kitchen. By introducing large ceiling beams, the architect was able to remove the wall between the dining room and the former kitchen to create a full-width, open-concept space.

Swooping staircases aren’t the only showstopping feature brownstones are known for—cue the pocket doors. Keay replaced the worn-down ones that originally framed the living room with a modern alternative, while Brewer got to work on shining a light on the small transitional space on the other side. Her idea? Create a jewel box–like wet bar by covering the walls and ceiling in deep red paint and cladding the countertop in turquoise Calacatta marble from ABC Stone. “I love that when you open the doors it’s this moment of drama,” says Brewer. “You go from this light, airy room to a space that envelops you in burgundy, and then it opens up again into the kitchen, which is very light.”

The soft gray kitchen cabinets (a custom stained oak from Shinnoki) were chosen to complement the blue-green veining of the marble island. Keay and Brewer kept the storage going on the other side of the room by cladding half of the wall in tall cabinets for surplus pantry items, infrequently used dishes, and miscellaneous cleaning supplies. The panels without handles aren’t actually operable, as there’s a chimney on the other side of the drywall; however, continuing the woodwork helped create a seamless look.

The built-in bench is topped with an easy-to-clean vinyl fabric that has the appearance of leather. “It’s super-durable,” notes the designer. The idea to introduce lilac upholstery was inspired by the nearby living room seating, while the dining table was a custom piece made by Withers & Grain out of bleached ambrosia maple, a variety of wood that gets its name from the small marks on the surface made by ambrosia beetles.

Because of the way the stairs protrude into the kitchen, Keay knew they wouldn’t have a lot of wall space left over to go wild with shelving. The solution was an asymmetrical arrangement that gives the feeling of airiness while still leaving plenty of space for cabinets. The lowest shelf above the range is the oddity because it’s made out of stainless steel (not wood) that is bolted into the wall, bisecting the stone backsplash. The ledge is thin (around five-sixteenths of an inch), but it’s approximately 10 inches deep, so it can hold daily essentials like olive oil and spices. “The client really took a leap of faith with us on that one because it’s admittedly a little bit different,” he continues. “Some people might think it’s industrial or aggressive, but I’m happy with the way it turned out.”

Feeling inspired by the green-gray rug, Brewer painted all the main bedroom walls a sky blue with the exception of the surface behind the headboard, now covered in a silk Phillip Jeffries wallpaper. “It has a watercolor-like finish to it,” she notes. The pattern is so faint that the installer was confused when he opened the first roll. “I was like, I promise there’s really a pattern! He had to unroll all of it and lay it out on the floor to see what was going on,” she recalls.

As to not take up too much real estate within the bathroom, Keay came up with a curved bench design so the clients still have a spot to prop shampoo bottles but can also comfortably stand under the showerhead. The arrangement of teeny floor tiles—a custom design from Nasco Tiles made to match a French mosaic pattern Brewer spotted—was ideal for the new bench design, as the tiles can more easily adhere to rounded surfaces than bigger slabs of marble. No wonder they say the best ideas occur in the shower.