They brought a slice of Hawaii to their new kitchen. 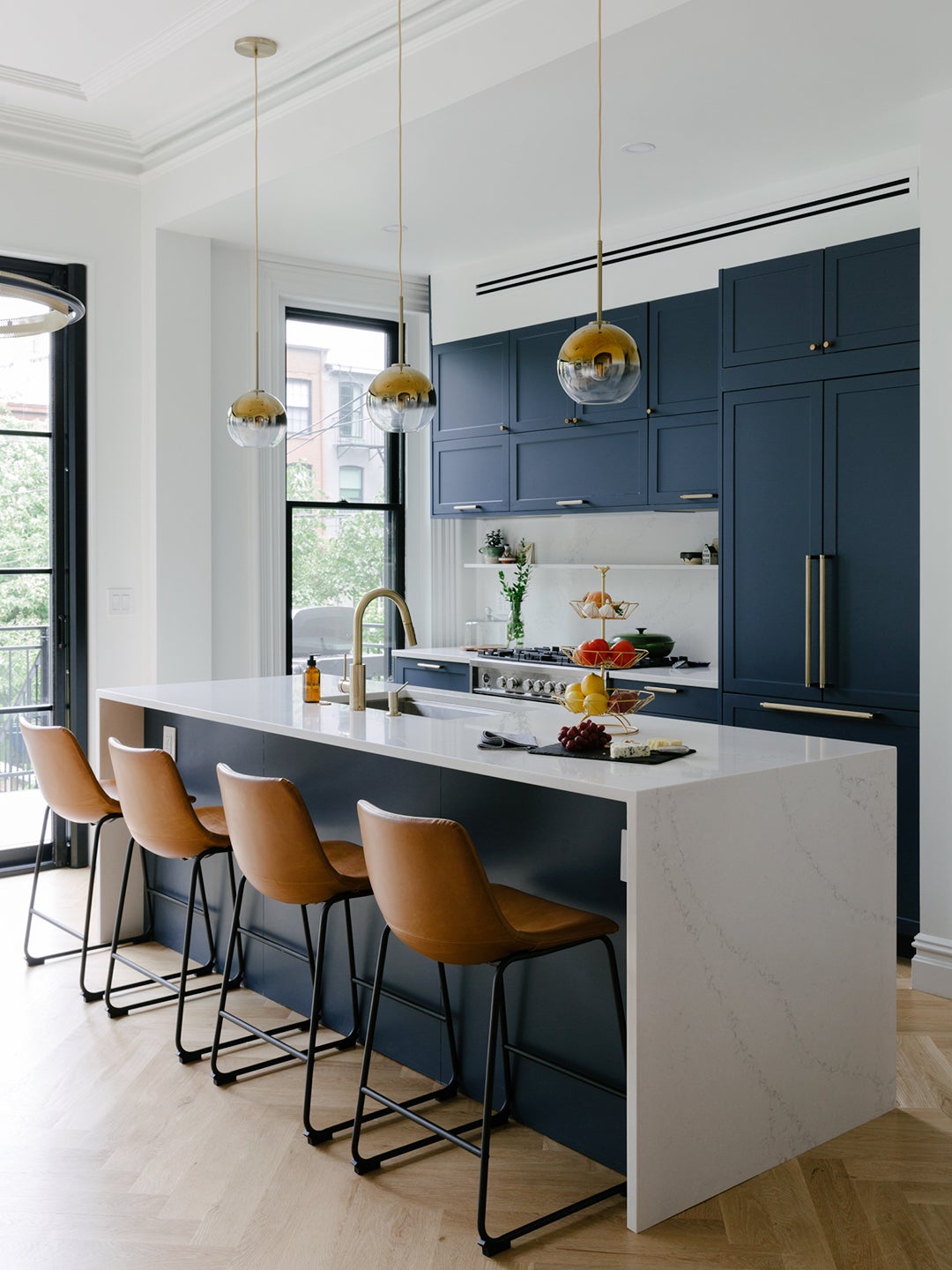 To say that Jonathan and Patty Reyes were charmed by Hawaii would be an understatement. One year after their very first trip there, they went back and got engaged. Then a couple of years later, they married on the North Shore. Each visit led them to explore a new island and test out a new hiking trail. “It might be nostalgia for our second-generation Asian upbringing, a fusion of Asian-influenced culture with domestic familiarity. In any case, we wanted to bring some of that peace and comfort to our house in New York,” says Patty. The first-time homeowners called on Barry Bordelon and Jordan Slocum (known as the Brownstone Boys) to restore their historic Bedford-Stuyvesant, Brooklyn, brownstone—and infuse it with a touch of the Aloha State.

“Their number-one request was a huge door leading from an open kitchen to a deck,” says Slocum. The cooking space, now situated on the main level (before the demo began, the building had been carved up into three apartment units), shines a spotlight on the treetops via sky-high glass doors. Opening up the kitchen in all directions was definitely one of the bigger costs (it called for a load-bearing beam), but it was well worth it. “The sight lines into the living area allow us to keep an eye on the kids, but the room can also be closed off if needed to keep noises and smells at bay,” explains Patty. The couple welcomed their second child shortly after the reno wrapped.

Other nods to nature: the deep blue Semihandmade cabinets and the palm tree–wallpapered powder room. “The whole space has that Hawaii feeling,” notes Slocum. Still, telltale signs of Brooklyn remain in the form of original marble fireplaces, interior shutters, massive pocket doors, and a plaster frieze. “We saw an opportunity to take that unique history, character, and charm and add our own story to it,” says Jonathan.

Shop in the “Undone” Floor Section

While the couple opted for new white oak herringbone floors throughout the parlor level, they made an exception for one special spot: a medallion inlay in the entry. “It’s a cool juxtaposition between the old and the new,” says Slocum of working around the decorative detail. Carrying the same oak flooring throughout the rest of the home was an investment made with cohesion in mind. “Otherwise it gets really choppy,” notes Bordelon.

In an effort to save some money on the major upgrade, the seasoned renovators chose to buy the planks unfinished (around $5 per square foot) rather than prefinished (closer to $20 per square foot), tacking on some extra labor and time on-site. “We had the contractor put a clear matte natural coating on top of them and it looks absolutely beautiful,” says Bordelon.

Include Your Kitchen Alter Ego

After splurging on reconfiguring the kitchen, the designers spared the Reyeses’ budget by opting for Semihandmade cabinets on both sides of the room (the fronts are semi-custom; the frames are IKEA). On the other side of the island, 15-inch-deep cupboards frame either side of the stone fireplace, one functioning as a pantry, the other as a bar.

“Instead of bringing the Night Sky blue to that side of the kitchen, we went with white to brighten it up a bit and make that area feel like its own space,” says Bordelon.

Another game of Tetris was figuring out where the HVAC would go. (A lot of brownstone owners want an amazing cooling and heating system, but installing it without damaging some of the original architectural character is tricky.) Look closely over the upper cabinets in the kitchen and you’ll see Slocum and Bordelon’s solution: a minimal linear vent next to a bump-out over the powder room (where the equipment is located). The slotlike opening appears elsewhere on the parlor level and helps air circulate without detracting from the design.

Step Up Your Stair Character

Along with mismatched flooring that needed fixing, another downside from the building’s previous apartment days was that the winding staircase had been broken up in spots. Sections of the balusters and spindles had to be remade from scratch to achieve an authentic appearance (the designers took small sections to a local craftsman who then re-created the design).

“It makes these really complicated turns; it was quite a puzzle,” says Bordelon. All the newel posts and the handrail got a natural wood stain, while the balusters and stairs received a coat of black paint for a modern touch.

Think Old School, Without the Old

The brownstone’s bathrooms are a far cry now from what they once were. “Some things hilariously had to go,” says Bordelon, hinting at the 1970s-era platform tub. The pair went in a different kind of vintage direction for the new guest bathroom by turning a mid-century–inspired media console from West Elm into a vanity. “You can do this with a lot of pieces of furniture,” notes Bordelon (as long as there is a cabinet under the vessel sink, that way you can easily incorporate the plumbing without compromising any drawer storage).

The designers topped the vanity with a slab of Hanstone quartz left over from the kitchen renovation. In the couple’s main bathroom, inexpensive white subway tile from Tile Bar balances out the cost of the pricier statement Fireclay tile that makes up the tub wall and niche. Turn on the water, close your eyes, and—voilà!—you’re on vacation.