A new kind of triple threat. 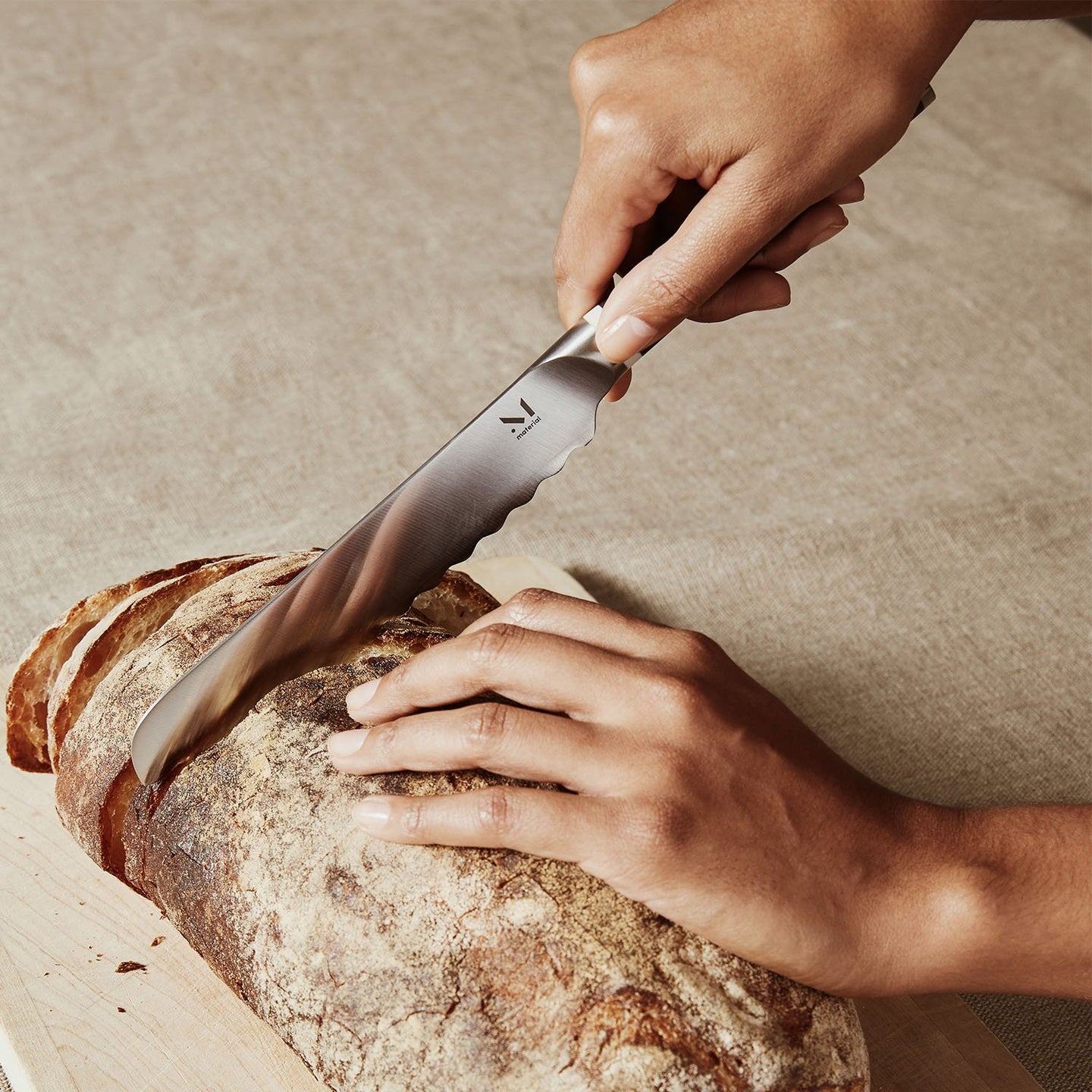 Like most people who have ever entertained the idea of minimalism, I could appreciate the tidy rooms and happily balanced lifestyle from afar, but I never really felt motivated enough to test it out for myself. Until it happened accidentally.

As a young and admittingly amateur cook fresh out of college, I did what every post-graduate does when they move into their first apartment: I went to Target and filled my kitchen with every gadget, slicing gizmo, and pot that even remotely looked like it belonged in the home of a seasoned chef. And while I thought I was channeling my inner Ina Garten as I piled every strainer under the sun in my cart, little did I know that I was actually making my home a haven for clutter-filled drawers and never-to-be used tools. It was only until I was first introduced to Material at an intimate dinner party in Brooklyn that I realized my kitchen didn’t have to be the disorderly hodgepodge it had become.

Unlike most heritage kitchenware brands that prioritize single-use tools like fancy spiralizers, avocado slicers, and 12-piece knife boxes, Material has taken a pared-down approach to the industry. “Really, the inspiration for Material came from a point of frustration,” says Eunice Byun, who, alongside Dave Nguyen, cofounded the company earlier this year. “I had just had my daughter, and when you try to squeeze a baby and all the things they need in a kitchen with all the things my husband and I had accumulated from our wedding registry, we felt as though our kitchen was eating us.”

With the modern home cook in mind, the pair stuck to making the staples as powerful and effective as possible. That’s when the “The Holy Trinity” was born: three beautiful and efficient knives created to handle every type of slicing, dicing, or carving predicament possibly imaginable.

“At the end of the day, you don’t really need to have six steak knives in a block with two different lengths of a serrated knife and four different other knives,” explains Byun. “The telltale sign for us is, ‘Am I going to reach for this every day for every meal?’ The kiss of death is when it ends up in that junk drawer will all the other items you bought and only used once.”

And so, the wannabe Marie Kondo within told me it was time to scrap the clutter and give the trio a try. Suddenly, with only three knives to my name, I could breathe easier. So much so that I finally pulled down the beginner cookbook that had been gathering dust on my kitchen shelf and earmarked a few recipes to test out. Knowing where my tools were (and what they were for) made the experimenting process a lot less intimidating. Not to mention that my tiny apartment kitchen looked a tidier.

The 8” knife is Material’s take on the classic chef’s knife. Designed to take on the heavy lifting, its razor-sharp edge and balanced body make it a breeze for carving a roast chicken, smashing garlic cloves, and chopping veggies and herbs.

“You can chop. You can dice. You can mince. You can carve. You can pretty much use that chef’s knife for the majority of day-to-day cutting tasks,” suggests Byun.

It took Byun and Nguyen over a year to come to the knife’s final design. Each of the knives boasts three layers of Japanese steel sourced directly from Japan and fabricated in China by a manufacturer that’s been making knives for centuries. Instead of opting for a typical 20-degree edge, Byun and Nguyen gave the knife a more durable 26-degree edge.

This is Byun’s favorite of the three knives, and I have to agree. Spanning only six inches, Materia’s serrated interpretation of a standard bread knife can be applied in virtually any slicing situation. The beauty of its cut lies in its size.

“A lot of folks are used to having an 11-inch bread knife, and bread is really all you can use it for because the length is a bit unwieldy for everyday tasks,” says Byun. “A shorter serrated knife opens up the versatility of that particular tool. There are a lot of different functions that open up when you shrink it from 11 inches to six inches.”

Think of it not as a bread knife but as a sandwich knife (or a panini knife, if you prefer your ’dwich on the warmer side). Thanks to its petite length and refined, wavy-toothed edge, it can handle just about every element you’d throw between two slices of bread—from the cheese to the spread. The piece also boasts a Santoku-inspired tip, making it a mean option for piercing soft-skinned veggies. Or if you’re a beginner like me, the tip of your pointer finger.

If you happen to have a talent for peeling oranges in one fell swoop, this is the knife you want to use to showcase your carving talents. As the smallest of the bunch, the Almost 4” Knife is great for tasks that require attention to detail—like removing seeds, deveining shrimp, and releasing cakes from the pan. Think of this final one as your “finesse” knife.

“Use this one for anything that requires a bit more precision,” suggests Byun. “I love it for fruit. It fits right in the palm of your hand and gives you a little bit more control so that you can do something that’s a bit more precise and accurate.”

Along with the knives, Material also sells a number of equally clever kitchen fundamentals, including a metal serving spoon that holds exactly ¼ cup of liquid (so you can ditch the measuring cup) and a flat-headed whisk that stands upright when not in use. The most recent addition is The Angled Board—an update on the classic dual-cutting/serving board with an angled edge for collecting chopped herbs.

Taking conscious action when it comes to your cooking staples isn’t necessarily about becoming a minimalist: It’s about being intentional. Ranging from $75 for one knife to $155 for all three, Material makes that goal pretty attainable.

“I think everyone right now wants to feel more conscious with their consumption,” says Byun. “There’s no number of items that every single home cook has to have. I think it comes down to what type of home cook you are, how much space you have, and how much you’re willing to invest in it.”

Whatever your magic number, remember that what you have in the kitchen shouldn’t hold you back—it should make you want to cook more.

Every One of These Cooking Hacks Are Basically Genius

This Hack Gets You the Perfect Avocado Every Time

The Case For a Really Good Kitchen Knife