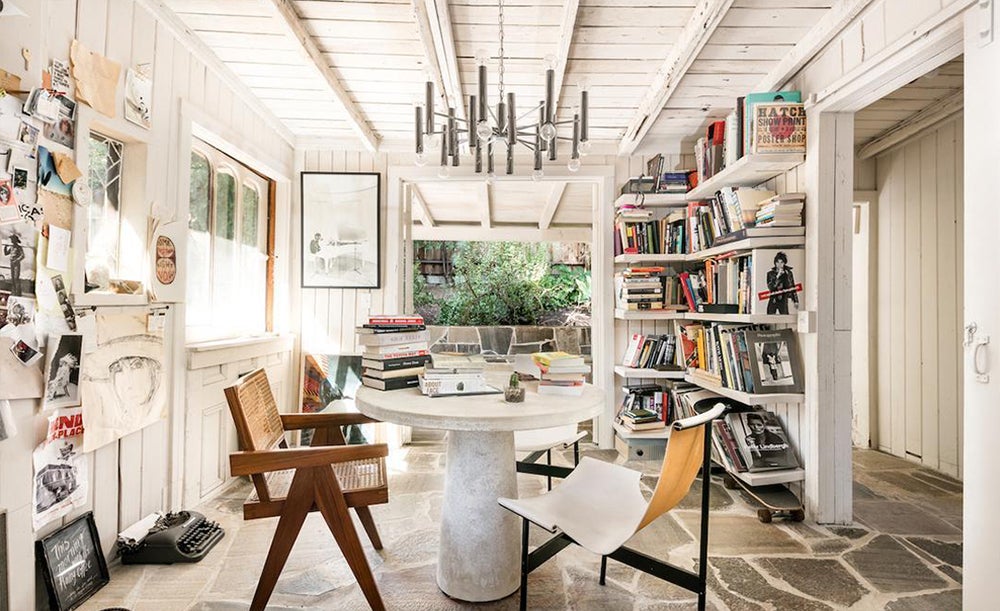 As true HGTV aficionados ourselves, we like to think we have a special talent for spotting fellow fans. One devotee we never saw coming? Lana Del Rey. While we tend to think of the indie songwriter as the edgy, alternative type, apparently, the musician is just as much of an admirer of the network as we are. So much so, in fact, that the New York native purchased a home designed by one of our favorite HGTV stars.

According to Variety, the musician shelled out $1.2 million for a rustic-chic cabin in the hipster-clad neighborhood of Echo Park in Los Angeles. Built in 1911, the tiny retreat recently underwent a fashion-forward facelift by none other than Los Angeles–based designer and host of hit series Restored by the Fords Leanne Ford.

Known for her all-white palette and curated eye for vintage detail, Ford has a knack for transforming quirky old properties. This project was no different. After two dedicated years of fixing up the two-bedroom, one-bath house, Ford walked through the finished product on her Instagram. Diana Braun of Compass was the listing agent for the property.

Perfectly layered and fit for the stars, the celeb-worthy gem is a treasure trove of decor inspiration. Just take a look for yourself.

“That big old dreamy window is why I bought this place,” Ford wrote of the kitchen on her Instagram. “It was oozing with charm and character. My job was just to keep it there and go with it.”

We’re guessing it was this same window that eventually sold Del Rey on the charming retreat.

While the kitchen tends toward the tinier side, the simple, L-shaped nook allows room for a large farmhouse dining table. In Ford’s case, this design opportunity called for an eclectic mix of dining chairs and whitewashed basket pendants.

A weathered claw-foot tub and hammered farmhouse sink extend a sense of age to the home’s teeny bathroom. For added character, Ford revealed that she soaked the new plumbing they installed in the space in vinegar and acid to make the room look older than it actually is. The designer also coated the walls in concrete and power washed the paint on the outside of the tub to continue the well-worn aesthetic.

Style and profession aside, if there’s one thing Del Rey and Ford definitely have in common, it’s a killer wardrobe. With little room for a master walk-in closet, the designer decided to move the bed to the center of the slender bedroom to make space for a “sliding door situation to walk behind for clothing.”

“It actually doubles as a sort of decorative headboard,” she wrote on Instagram.

A stone floor designates a separate sitting area, which opens up to a breezy pavilion.

While the 1,200-square-foot cabin is a far cry from Del Rey’s other homes—which, per Variety, include a $2.5 million English Tudor in Windsor Square and a $6 million contemporary ranch in Coldwater Canyon—we know the “Summertime Sadness” artist won’t find any trouble bringing her edgy-cool style to the table. That said, if we were her, there’d be a few key pieces of Ford’s that we’d definitely want to keep around for ourselves. After all, HGTV royalty knows best.

Here are a few of our favorite finds from the A-list home you can steal to get the look.

The cool, sculptural fixture that hangs in the living room makes as much of a statement today as it did when it was created by the iconic Italian designer back in the 1950s.

A creamy, faux-vintage fridge in the kitchen ties the home’s old-school charm and sleeker, contemporary elements together.

Ford is a huge fan of this L.A.-based artist she discovered on Instagram. Her large abstract drawings by the stone fireplace help create a layered, art-filled look.

A warm Turkish shower curtain complements the cold stone and raw metals in the master bathroom.