The Illustrator Behind The Wing’s Wallpaper Sleeps Surrounded by Books 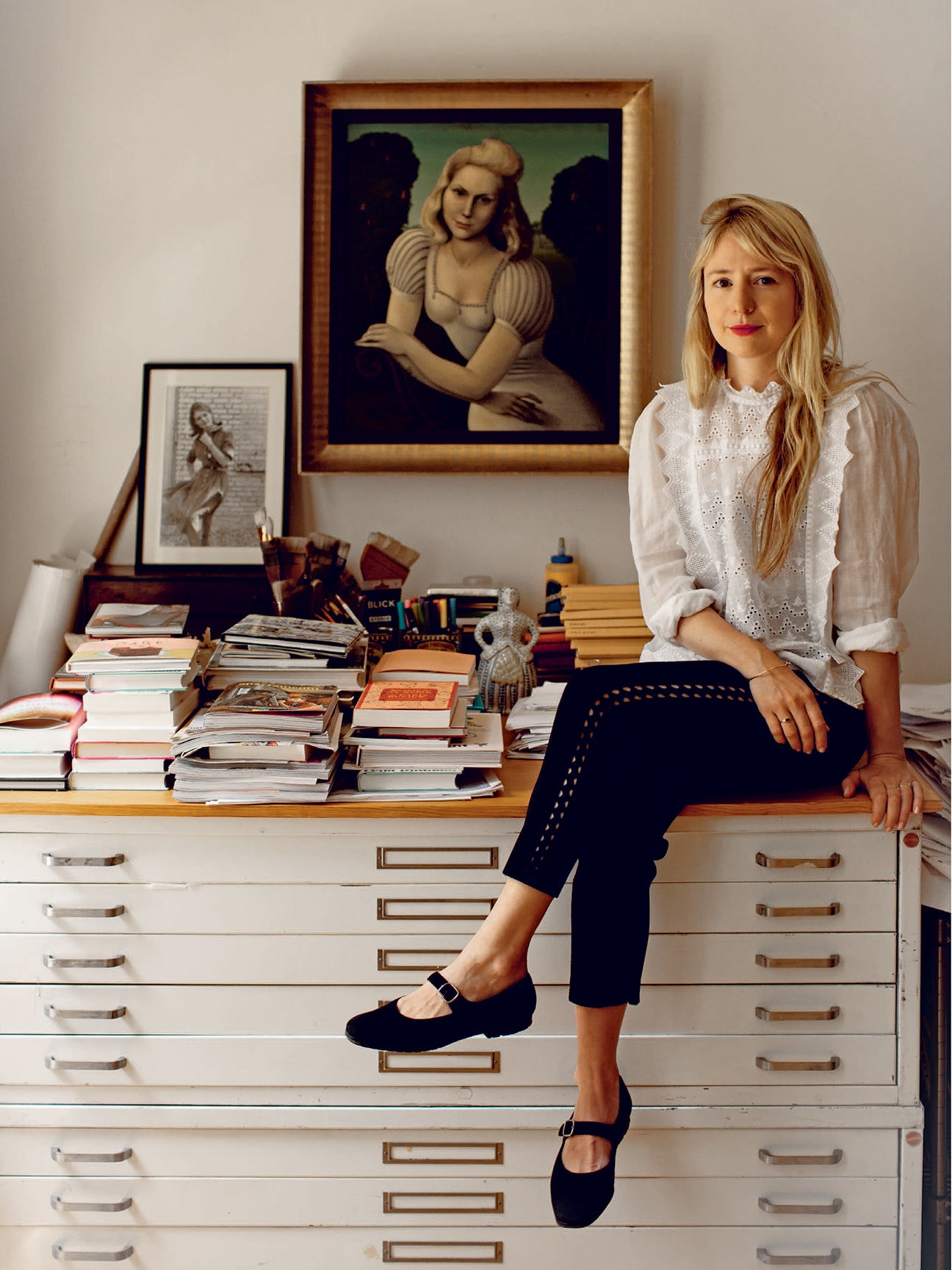 For those who can’t get enough of a good story—told in poetry or prose, graphics or letters, with drama, tragedy, comedy, and everything in between—books are more than ordinary objects. They’re imbued with their own kind of magic, and whether they’re arranged neatly on shelves or more liberally in piles, they make a space feel personal. Your books, after all, say a lot about who you are. This is what Nina Freudenberger explores in her new book, Bibliostyle, and in this excerpt, she shares how New York–based illustrator Joana Avillez lives in her book lover’s dream of an apartment:

“Before I lived in my dad’s studio, I had a really tight grip on my books,” says illustrator and author Joana Avillez of the library in her bright Tribeca loft. “I was always pruning and organizing, and when adding a new addition, I would present it to the members of the shelf for feedback and acceptance on both subject and placement. Now the library is the merging of two already merged people.” The loft was originally the office of her father, the late artist Martim Avillez, and the base of his arts journal Lusitania. It was her father who built much of the space’s functional, minimalist furniture—the sawhorse dining table, the hidden cupboards, the many built-in bookcases. The result is an area that feels intensely personal, hypercreative, and filled with an uncluttered dynamism. Her Murphy bed is set into one of these walls of bookshelves, clearly indicating the importance of reading in the artist’s daily routine. “I sleep surrounded by my books,” says Avillez. “I find it comforting.”

The library itself is a combination of Avillez’s own collection of novels and history and art theory tomes and those she inherited from her father. She arranges the books, roughly, by subject. “My dad’s art and theory and culture books and my illustration and cartooning and children’s books—our collections overlap at comics (he knew his stuff). I’ve had to move some of the Deleuze and Guattari and Spinoza biographies a bit higher up—I like to have all my favorites in my sight line (like picture books about animals living in stumps).”

Avillez loves children’s books, which she draws on for inspiration: Barbara Cooney, Beatrix Potter, Ludwig Bemelmans. “My plumber once asked me how many kids I had based on my colorful and largely fonted library,” says Avillez, who has none.

On her shelves and walls, books—many French and Portuguese, reflecting her family’s varied origins—mingle with art. Avillez’s own work, mostly inspired by the energy of her home city, keeps company with sculptures by her father; a Milena Pavlovic-Barili portrait of her grandmother; and works by Leah Reena Goren, Dike Blair, and Joan Jonas. “Because the space is limited,” she says, “I really have to confine my [collections of] things, clothes, and especially books to those I truly love or that have great sentimental value,” she says. She likes best to borrow: “I’m always asking for recommendations. And I take very good care of my friends’ books!”

Part of the problem is that Avillez never knows what she might draw on for inspiration. Recently, for instance, while coming up with a “character” for a fashion brand, she felt a strong desire to look at a certain image from Helmut Newton’s Portraits—luckily easily accessible via her rolling library ladder.

When she collaborated on Julia Sherman’s Salad for President, she immersed herself in cookbooks. When she designed wallpaper for the clubhouse of The Wing, she read biographies of iconic women. And certain references are perennials: back issues of The New Yorker, Eloise, the work of cartoonists like Daniel Clowes.

“Depending on what I’m working on,” she says, “I always have a few books on my work table,” which is an organized space made of scavenged filing cabinets and filled with pencils, pens, and colorful watercolors. Lately she has surrounded herself with the books of William Steig to help inform her phonetic puzzle book, DC-T!, which she collaborated on with writer Molly Young. Now Steig’s CDB! holds pride of place next to Tintin and a memoir about an early-20th-century artists colony and a 1940s YA novel appropriately titled Betty Loring, Illustrator, which was a gift from a friend.

When reading for pleasure, Avillez usually stretches on the forest green daybed near the loft’s series of large windows. “Because this is essentially one room,” she says, “I like to try to kind of divide it by activity; it keeps you sane—and organized—to leave ‘work’ at the end of the day.” Often, she’ll take a book with her to the park, where she walks her feisty terrier mix, Pepito (named after a character in Ludwig Bemelmans’s Madeline series), and read while he plays in the small dog run.

And on those rare moments when the sheer weight of history and inspiration and books becomes too much, Avillez has a very literal coping mechanism: a series of velvet curtains on brass rods that can be pulled across the shelves. “Sometimes you do need a little space,” she concedes. “Even from books.”

‘Bibliostyle: How We Live at Home with Books’, Clarkson Potter ($32)
Shop

See more book organization: Your Bookcase Doesn’t Have to Be Boring Hot Take: The Best Book Storage Ideas Don’t Involve Shelves In Defense of My Book Installation That Blew Up Domino’s Instagram