Yaminah Mayo only keeps the books that help her grow. 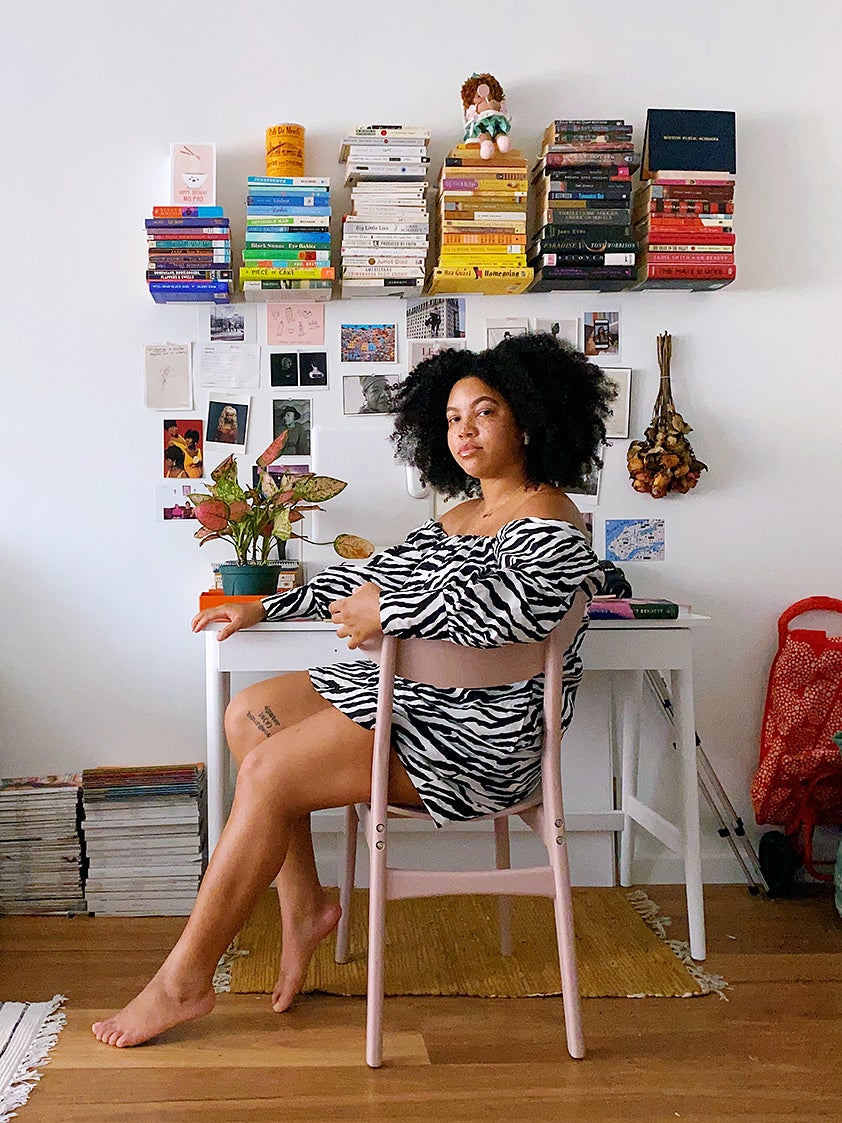 “My favorite conversations are about books,” says Yaminah Mayo, the model and fashion blogger behind Spicy Mayo. “When my friends come over, they see my shelves and are always free to borrow a book. When you grow your friendship through reading, that is really special.”

Mayo, who is living alone for the first time after moving to New York six years ago, has set up a space of her own with a color-coded floating library in her Bronx apartment, which features all of her favorite authors—Toni Morrison, Ralph Ellison, and bell hooks among them. Her collection has been heavily influenced by her mom, who inspired her love of reading at a young age. (The two still keep up an informal book club today—they’re currently rereading Mayo’s childhood-favorite series, Harry Potter, together.)

Here, she shares how she keeps her floating shelves organized (it’s all about rotation), the books she lends out the most, and why she sometimes buys books in doubles.

Floating Shelves Are a Game Changer

When I moved to New York in 2014, I really just had a suitcase of clothes with me, so I built a lot of my collection here. Eventually, I had this stack of books sitting on the floor, and I didn’t want to live like that anymore. I bought a desk, but then I had too many books to keep on it. So I went on Amazon and bought a pack of six shelves. I didn’t have any real rhyme or reason for stacking them at first, but then I decided I wanted them to be a little more organized. For the most part, I know a book by its cover, so I started organizing by color. I’m not really going to amass a huge collection because I’m always rotating books in and out.

The books I keep are the ones that I feel grow with me. If I was reading something just for one-off entertainment, then I’ll usually pass it off to a friend and say, “Do you want to read this?” Or I’ll donate it to the Free Black Woman’s Library, which accepts books written by Black women and redistributes them to people who might not be able to afford them. The book I lend the most is All About Love by bell hooks. I read it in 2016 and I swear it made me feel like I had never, ever been loved a day in my life. [Laughs] It gets at the definition of love, which is really hard to do, but it’s a really good book. My friend also lent me Such a Fun Age in April. She sent it in the mail—it felt great to get a package with, like, seven stamps on it.

I really love a good cover—Britt Bennett’s The Mothers and The Vanishing Half are two that I read on Kindle, and I’m going to buy physical copies too because I love their design. I try to find specific editions of books for their covers. Right now I’m looking for one of Toni Morrison’s first editions of Sula. I saw it one time and didn’t get it, and now I regret it. It’s one of my favorites. That’s also the book that made my mom know she wanted to major in English in college, because a teacher had given it to her to read. And then, coincidentally, my eighth-grade teacher gave me a copy, too.

Two Is Better Than One

I sometimes buy my books in doubles: If I get a book on Kindle and really love it, I’ll buy a hard copy for my library. I’m spending double the money, but that’s okay, because publishing is in trouble.

The Best Place to Read

I get a lot of my reading done in the bathroom—I won’t even be using it, I’ll just sit on the toilet seat because it’s comfortable and read for two hours, despite the fact that I have a couch and two chairs and a really comfortable rug and a great bed. I will literally use the toilet as a seat to read a book.

Now my mom and I share a Kindle library and have our own book club. We’ll both decide to read a book and talk about it on the phone—but if one of us hasn’t read to a certain point yet, then we’re not allowed to read it. Right now we’re doing that with Harry Potter—we want to get through the whole series and we’re on book three. When I was in kindergarten, she would read the first book to me on the bus on the way to school—that’s how I got into reading. She also just finished Jacqueline Woodson’s Red at the Bone, so I have that up next.

Some of my childhood books are in a bin because I don’t know what to do with them yet. I still have my picture books from when I was a kid—they’re probably collector’s items now. Some of them were illustrated by really renowned Black artists, like Faith Ringgold. My mom went through a lot to find those books. We talk about diversity in children’s literature today and how it’s underrepresented—imagine what it was like in 1992. Some of my children’s books were written by Nikki Giovanni, which is cool because you see her as an activist but never as a children’s book author. I don’t want to throw them away.

How Her Books Make Her Home

This is my first time living alone, so to have this whole anthology of authors and stories and novels and nonfiction about people who persevered is inspiring. It gives me something to aspire to, because a lot of the books in my collection are not just by Black people, but by Black women. Whenever I think about my books, I think about all these activists and thinkers and creatives who were able to demand a sliver of space in time, and that’s really cool and inspiring.