A four-year-long project led by light. 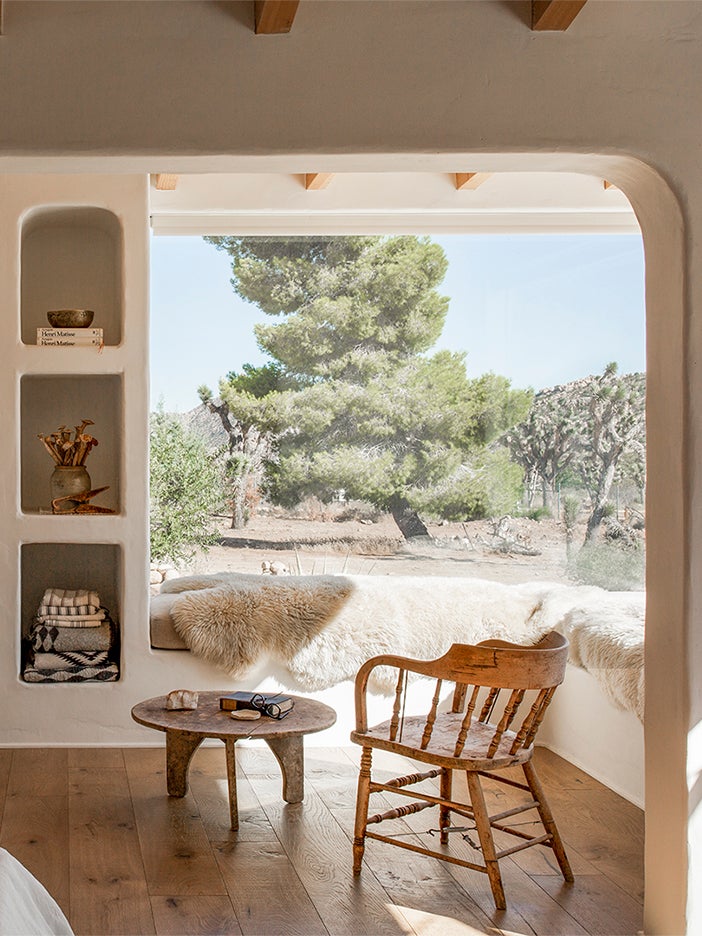 Photographer and director Magdalena Wosinska wasn’t immediately sold on the tiny, abandoned adobe home in Pioneertown (population: 428). But in fear of missing out on an opportunity to put down roots in the California desert, she put in an offer on the property. She expected a six-month-long renovation, but the entire process ended up taking four years. “My first impression of the home was this is a project,” says designer Sarah Solis, laughing, who came onto the remodel about a year after Wosinska bought the place. “I was taken with the story of the space and the connection to the land.”

Taking their time paid off. It allowed Wosinska and Solis to stretch the budget and carefully art direct the construction. While the owner was busy analyzing where they could carve out doors and hallways so the light could travel through the building, the designer studied up on traditional adobe craftsmanship and aimed to re-create the imperfect nature of the original plaster walls elsewhere. “This helped us tie the thread between the new and old structures,” says Solis (the kitchen, dining area, and guest bath are all additions). “We actually emulated the undulations.” Here, Solis walks us through the space—featured in full in our Fall 2020 Style Issue—and shares some of the more artful decisions they made during the reno.

A hand-applied plaster finish on the walls was one way Solis sought to tie the old adobe structure to the newly constructed rooms. While they did have to hire out the job, the finish was actually less expensive than Wosinska’s first idea of using American clay for the extension. The labor (it requires a specialist) and the material itself are both more costly than traditional plaster. For a modern touch, they went with brass light switches from Forbes and Lomax. “We both prefer the action of a rotary dimmer,” says the designer. “I was really excited that she loved this idea.”

Wide-plank white oak hardwood runs throughout the old adobe structure. Everywhere else, the pair opted for polished concrete, a material Solis says was the biggest money saver during the reno. Another bonus: The material, which shows up again on the kitchen counters, helps keep the desert home cool.

Save Space With Permanent Furniture

In keeping with the architectural integrity of the house, Solis opted for traditional built-in furniture, designed in the banco tradition. Everything has its place and is integrated into the floor plan. The sofa, for instance, was first constructed out of sturdy 2-by-4s before being covered in a wire mesh and prepped for plaster. Solis topped it with a linen cushion made out of medium-firm foam core wrapped in down feather.

The con, Solis notes, is pretty obvious: Once it’s set in stone, there’s no rearranging things. “But rooms of this small scale really only have one optimal layout,” she points out. The pro? Everything feels solid and connected.

Carry the Story Into the Bathroom

A good chunk of Wosinska’s budget went toward the bathrooms, mostly because it made sense for her lifestyle, but also because it’s a reliable place to invest if you want to increase a home’s value. That’s not to say the designer opted for basic builder-grade finishes. She infused the rooms with character by bringing in antique sinks (the one in Wosinska’s bathroom is from an 18th-century vineyard in the South of France, and the guest bathroom has a 19th-century basin sourced from a kitchen in Provence).

“Magda had originally been thinking of doing floating concrete, but I wanted something with a story and history,” says the designer. The fixtures are also a nod to Wosinska’s many travels to Europe. Pieces this heavy (each weigh in at hundreds of pounds) require a steel frame system that is welded to the walls.

Think Outside of the Boxy Window Frame

All of the windows came from the Anderson E Series—Solis’s go-to choice because the panels are easy to customize and, in this case, the narrow wood frames complemented the home’s minimal lines. The brand also offers specialty awning windows, which the designer took advantage of in the guest bedrooms, as well as in the kitchen above the sink. The furniture and layout of each room determined the sizes and shapes of the glass panes (peep the two that perfectly frame the built-in bench in Wosinska’s bedroom).

The floor-to-ceiling windows in the detached sauna makes it feel like you’re outdoors during your session. “We wanted unobstructed views of the landscape that could still be opened,” says Solis of choosing operable panes. No matter where Wosinska is—the kitchen, the shower—she’ll always be bathed in shimmering desert light.