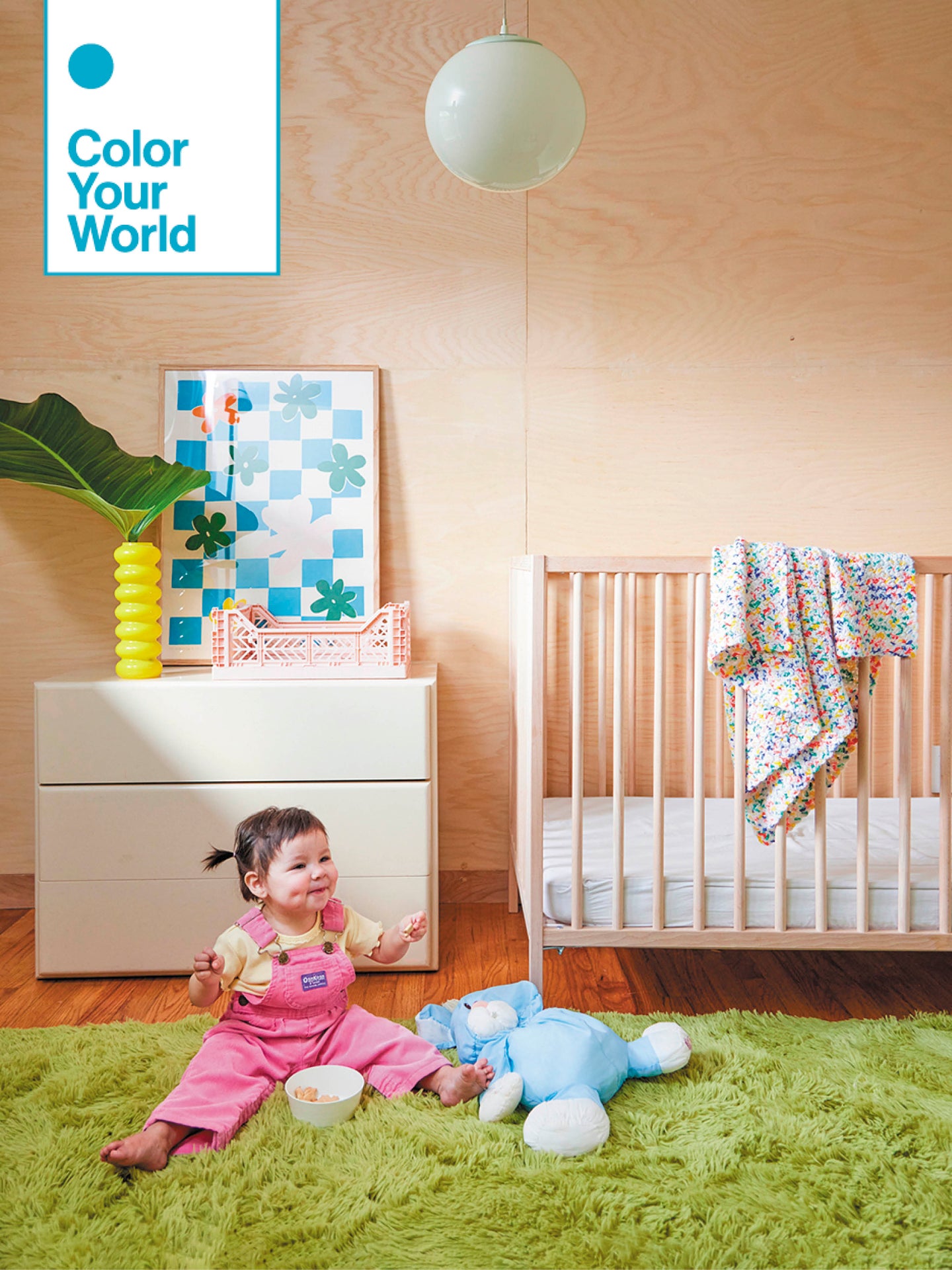 It was a combination of quarantine and turning 35 that ultimately inspired Bethany Brill to quit her longtime career as a hair and makeup artist last summer and start making objects out of plaster and resin. “There’s something magical about picturing something in your head and bringing it to life right in front of you,” says the budding artist. A large floor mirror for her living room was her first creation (she didn’t want to spend thousands on a store-bought one), but she’s since expanded to catchall trays and other small sculptures. “It’s just so addicting,” she adds.

Working from her mid-century Portland, Oregon home has also allowed her to see her husband, Jorge, a freelance filmmaker and director of photography, and daughters Zara (5), Billie (2), and Margot (18 months) more. “It’s important to us that our kids are raised by George and me, equally, and we get to spend time with them while pursuing our creative passions,” says Brill. So the major life change called for some much-needed cosmetic updates around the house.

When they originally purchased the then 1,200-square-foot house four years ago, they rushed into renovating the linoleum-clad space. “I knew we wanted to have another baby and I have really rough pregnancies, so I was like, let’s just get through this,” she recalls. Looking back, Brill blames watching too much HGTV for a lot of those initial changes (since she was so focused on resale value, they lost personality). “I don’t care what the next home buyer thinks looking at it,” says Brill. “I want it to feel soothing and safe for my family.”

The room Brill was most eager to fix? The kitchen. Back in 2018 she didn’t realize that putting upper cabinets on the walls would block the natural light and create a shadow on the countertop. “I was squinting when I was chopping vegetables,” she recalls. The doors also swung upward, which the couple initially thought looked sleek but in reality meant they had to duck anytime they wanted to grab something.

This go-round Brill got the genius idea to extend the lower cupboards (and the countertop), allowing them to get rid of the uppers without losing any storage. While she was at it, she decided to rip out the too-busy black and white backsplash and replace it with zen green squares. “We gained more courage as we went along DIYing things,” she says. “That opened up a whole other door for us.”

Soft and creamy colors Brill best describes as chalky informed her newfound palette. “I was raised in the ’90s, so it’s nostalgic for me,” she says. Checkered patterns also have special meaning for the artist: They remind her of the notepads her engineer dad always had lying around the house. “They add order to all the other things that are curvy and fluid,” she says, like the abstract botanical shapes she painted on the wall in Zara’s bedroom (the pastel silhouettes were inspired by a design at a local ice cream shop). “If you can’t afford all the cool furniture you want, doing something like that can really make a space feel customized and special,” she explains.

Brill had always planned on converting the attached garage into a livable addition (they never park their car in there anyway), though originally she was picturing a sunken living room. Then the pandemic hit and the pair realized the extra 400 square feet would be better served as their main bedroom-slash-studio, allowing them to free up a bedroom for Margot and hide breakable objects, including George’s film gear. The couple added six windows to the room, including two 8-foot-long ones positioned high up on the walls, so whether they’re soaking in the tub or laying in bed, they see only blue sky and pine trees.

“There’s something magical about picturing something in your head and bringing it to life right in front of you.”

To save a cool $8,000, Brill did all the tile work in the home herself. “I had three breakdowns,” she says of swathing the main bedroom in the little squares. If even one was off by an eighth of an inch, it had a cascade effect. “I definitely screamed ‘no!’ a couple of times when I realized I had to rip up 20 feet of tile,” she says, laughing. Guy Raz’s and Brené Brown’s podcasts got her through the two-week-long endeavor.

Brill’s father-in-law lent a hand in Margot’s nursery by covering the dated textured wall with four sheets of birch plywood. It also solved another problem: bringing warmth into the room without relying just on paint. “That’s my aesthetic—playful, minimal, and a touch vintage,” she says. She also has a soft spot for laminate storage cabinets from the ’80s. Bonus: They wipe down clean. “We’ve been hunting them down all over Portland,” she notes.

advertisement
“I definitely screamed ‘no!’ a couple of times when I realized I had to rip up 20 feet of tile.”

Naturally, Zara, Billie, and Margot have started to tap into their creative sides. “They all know how to use a camera,” says Brill. These days Zara is deep into music (she can memorize lyrics and notes instantly, her mom attests). “I’m really hoping there’s a girl band in our family,” she says, laughing. We know just the location for their first music video.

Pattern that best captures me: The combination of wavy, colorful shapes with a minimal backdrop and hints of grid throughout.

Object in my house that gets the most use: Our Samsung appliances! As parents of three kids, we live in our kitchen, so having a child lock on our oven, a dishwasher that is quiet, and a giant-but-still-cute fridge is key.

Biggest splurge: Either our cedar siding or slowly replacing all the windows.

One thing I wish I knew before renovating: We could have saved time, money, and some frustration if we would have taken our time and done a slower design. That, and trying to buy used or open-box items before paying full price for anything.  My parents always say you can only spend money once.

I loved working with: Our family friend Val Nonyak on the windows and paneling, and Daniel Sirosh on the tiled fireplace.