Hand-Painted Wallpaper Sets the Scene in This Dreamy Manhattan Apartment

Meet the designer behind The Wing’s aesthetic. 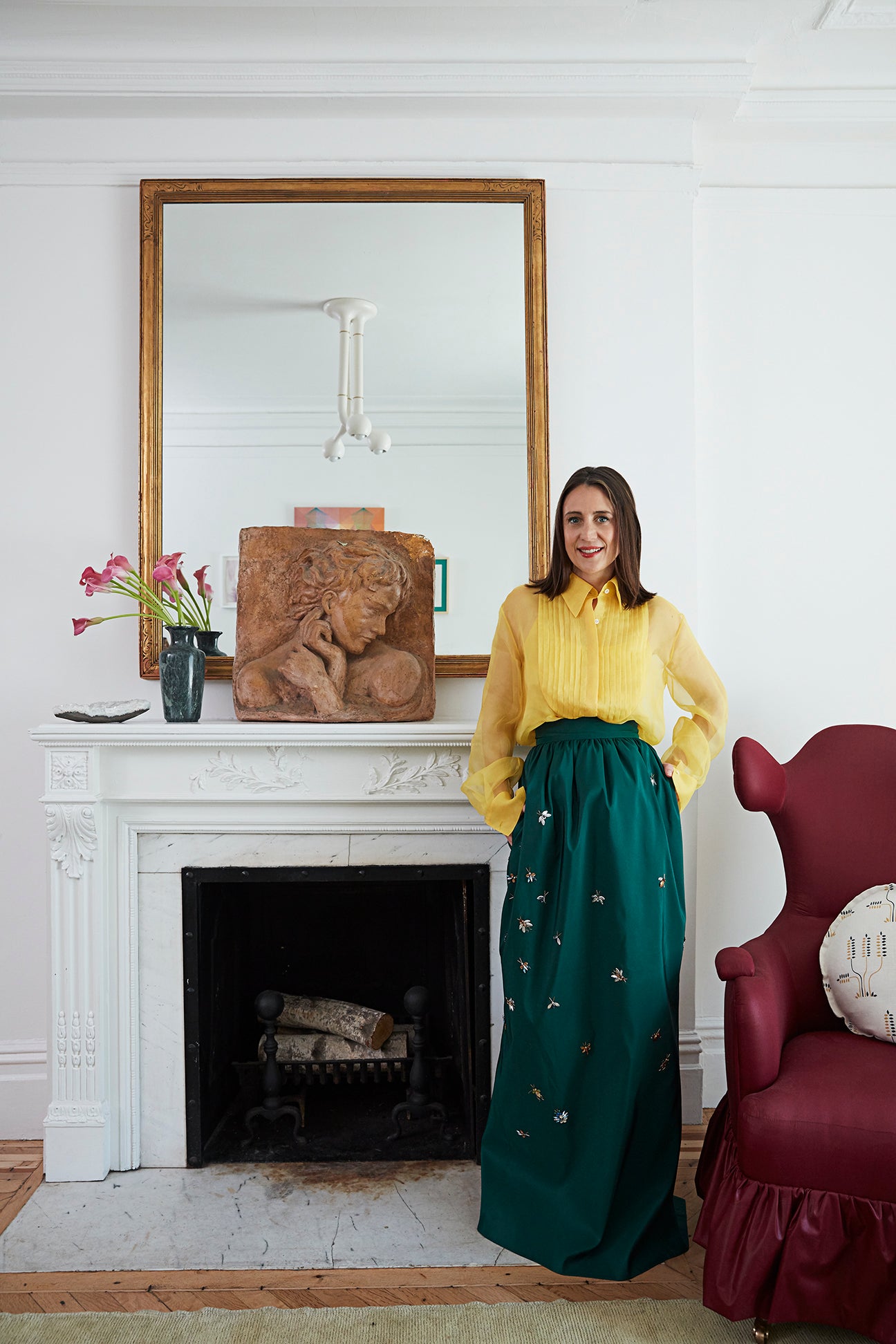 This story originally appeared in the Fall 2019 issue of Domino, titled “Pattern Play.” Subscribe to be the first to receive each issue.

“A lot of people have commitment issues with wallpaper,” says Chiara de Rege. If there’s one person who can ease that fear, it’s her. The accomplished interior designer helped bring the first outpost of women’s coworking space The Wing to life in New York City’s Flatiron (as well as those in SoHo and Dumbo, plus the Washington, D.C., and Los Angeles locations). There, she established a “subtle and timeless” color palette of soft pink, ochre, navy, and brass—along with custom wallpapers by Joana Avillez for Flat Vernacular and de Rege’s own line of wallpapers, Maison C, which is hand-drawn and painted by cofounder Costanza Theodoli-Braschi and has quickly become a cult favorite.

In de Rege’s three-bedroom rental apartment in Manhattan that she shares with her 5-year-old daughter, Phoenix, every room serves as a showcase for the designer’s studied eye. Having free rein to indulge her personal inspirations—a love of French New Wave films and style icon Marella Agnelli’s captivating Italian estates, among others—was a big part of the draw. “I did things I wouldn’t necessarily do for a client,” she says, noting old-world touches such as a skirted armchair that looks anything but fussy. “I like more layers and stories.”

Growing up spending summers in Piedmont, Italy, at her grandmother’s stately 7th-century home left a strong impression. “Nothing was too precious,” says de Rege. There was a pink floral sofa, where she spent hours devouring books, and grand formal dining rooms adorned with chintz and hand-painted chinoiserie wallpaper—which later inspired her to launch Maison C. Her father, an inquisitive urban planner, took care to point out the highlights of classical architecture during the family’s travels in Europe. “We visited every museum under the sun,” she recalls.

So it was fitting that de Rege recently moved into a high-rise built in 1913—just a stone’s throw from the brick-and-brownstone grandeur of Carnegie Hall and Alwyn Court—an ornate building whose gargoyles enchanted her as a child. “I loved all these old details,” she says, pointing to the apartment’s soaring ceilings and original crown molding. “The building is filled with musicians and actors. It’s a real dose of what New York is supposed to be about.” Her landlord was less than thrilled when she decided to strip the light wood floors of their polyurethane coating and give them a matte finish. But the rest was left mostly untouched, freeing her to approach the space like a fresh canvas.

A rich marigold wallpaper is the first of several mesmerizing patterns that greet visitors upon entering, along with a set of plates hand-painted by de Rege’s aunt in a matching palette, creating an almost trompe l’oeil vignette. In the “dining family room”—so-called for being a fluid space for dinner parties, as well as curling up and watching an I Love Lucy episode with Phoenix—a series of Japanese cranes taking flight against a dusty pink backdrop pulls everything together. “Wallpaper saved this room; it defined it,” says de Rege. “I always want to sit in here.”

In contrast, she left the living room walls bare to let the prewar details pop. Each piece of furniture plays off the next, from a swirled acrylic and glass coffee table scored on 1stdibs.com to a sculptural chair upholstered in crimson chintz from Maison C’s forthcoming line of fabrics. “This is the first place I actually tried the fabric,” says de Rege, who, with Theodoli-Braschi, is working on a line of furniture inspired by 1960s cinema. “Our sofa is based on the sofa in Jean-Luc Godard’s Le Mépris, and our armchair is based on an old chair shown in a palace that belonged to Visconti.”

In Phoenix’s room, de Rege’s penchant for creating a world within walls is on full display. “Phoenix had some say here,” she says, citing her daughter’s choice of shimmering wallpaper. It sets a fanciful tone, contrasting with the persimmon-and-fuchsia–trim canopy hanging over the bed. “She wanted pink, pink, pink, but we made a deal that we would not do pink on the walls, too,” says de Rege with a laugh. “Then she really wanted a bunk bed, but because she jumps from everything nonstop, we agreed on the canopy—if it could be in pink.”

The designer found more clever ways to maximize her space, turning a galley hallway that leads to the kitchen into a playroom complete with chalkboard wall and children’s dining set. “The saddest little guest room ever” became the old-school, chintz-covered moment of her dreams in a cherry-hued floral wallpaper that matches the bed’s canopy. “Whether it’s a historic place or a very modern one, I want it to feel timeless,” says de Rege of mixing eras and styles with a light touch. “The trick is not getting caught up in trends.”

More Inspiring Home Tours: Art Is Furniture and Furniture Is Art in The Citizenry Cofounder’s Dallas Home European Antiques and Beachy Whites Blend in This Spirited Sydney Home We’re Obsessed With the Custom Design Moments in This Desert A-Frame