The New NYC Space Everyone Is Talking About

Part shared workspace, part social club, the newly launched The Wing is redefining what a woman’s place can be. 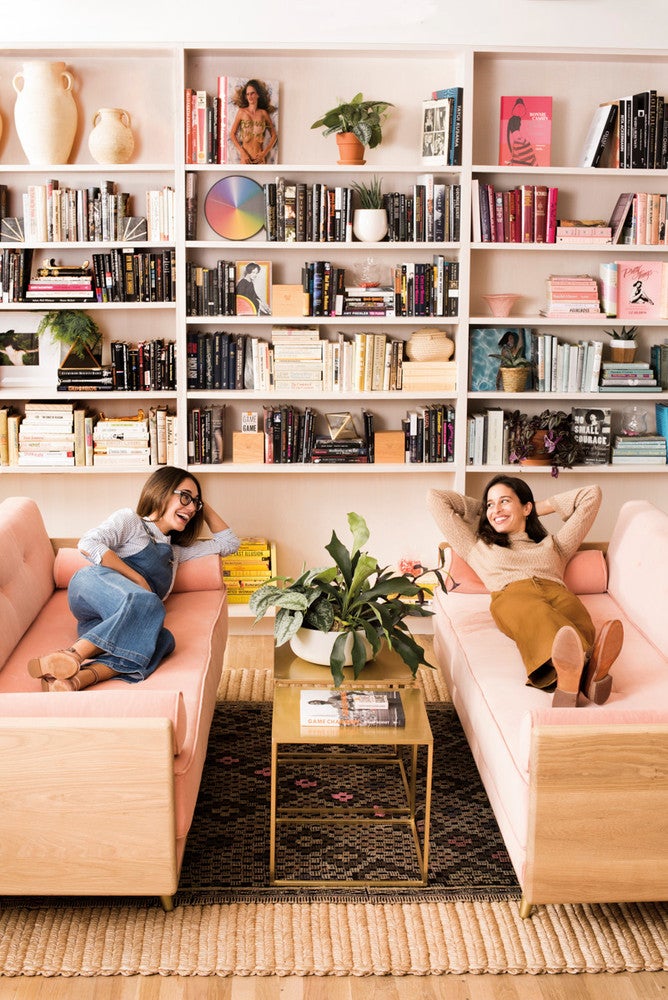 Perched on the 12th floor of a historic building near New York’s Gramercy Park, The Wing is a girls-only haven of pale pink sofas, ash and walnut communal tables, and terrazzo countertops. Pop by and you might find Tavi Gevinson or Petra Collins catching up on emails from one of the mustard wingback chairs—or overhear an entrepreneur-in-the-making swapping strategies with an investor she just met in the dressing room. “It’s interactive here because it’s intimate,” says member Alex Covington.

Beyond the polished design is a clear mission: “We’re allowing women to take up space,” explains Audrey Gelman, who launched the now-350-member-strong club with cofounder Lauren Kassan in October. An entire wall of bookshelves stocked exclusively with female authors puts the idea into action, along with a full calendar of events posted by the elevator (girls’ poker night, anyone?). Even the Internet password, set in acrylic frames on various low brass tables, relays the message: LadiesFirst.

Founders Audrey Gelman (left) and Lauren Kassan (right) named The Wing in reference to, among other things, an extension of a home—as well as a high-five to wingwomen everywhere.

“It’s kind of like Mad Men—without the men,” says Hilary Koyfman, who designed the interiors with Chiara

of CdR & Co. They assembled a dream team of female collaborators to create custom pieces—including the whimsical “busy women of New York” toile wallpaper hand-drawn by Joana Avillez—as well as artwork by Leanne Shapton, Laurie Simmons, and Gia Coppola. The effect is streamlined but warm and lived-in, with plush layered rugs, oversize pillows, lots of plants, and a few quippy details for good measure. A furry-covered book titled Feelings sits on a coffee table, while a neon sign that reads “Personal Space” leads to the locker and beauty rooms, where blowouts come on-demand.

Originally imagined as a wellness space for a quick refresh in between meetings about town, the idea for The Wing shifted as Gelman and Kassan (who met in July of last year) looked into the history of the women’s club movement. As many as 600 such groups operated in New York between the late 1800s and the 1930s—several in the same Ladies’ Mile Historic District as The Wing. “We wanted to create something modern,” says Kassan. Walking around a room filled only with women, made by and for women, still feels a little radical almost a century later. Now seems the right time for a clubhouse revival

(right) and senior designer Hilary Koyfman (left) in front of the color-coded library.

EJ 123 Toward Sofa by Anne Boysen for Erik Jorgensen, $4,546; danishdesignstore.com

The voluminous W logo is one of 30 variations on the letter. “We wanted to show that there’s not one ‘type’ of Wing woman,” says Emily Oberman, partner at design studio Pentagram, which developed the branding with an all-female “Pentagals” team.

Musician and MTV News correspondent Meredith Graves sports one of the clubhouse T-shirts printed with an ad from the 1920s.

(right) chat in a window nook. “We meet women from so many different spheres here,” says James, a founding member. “And we appreciate and empower one another in this space.”