We Furnished Our Apartment Almost Entirely for Free 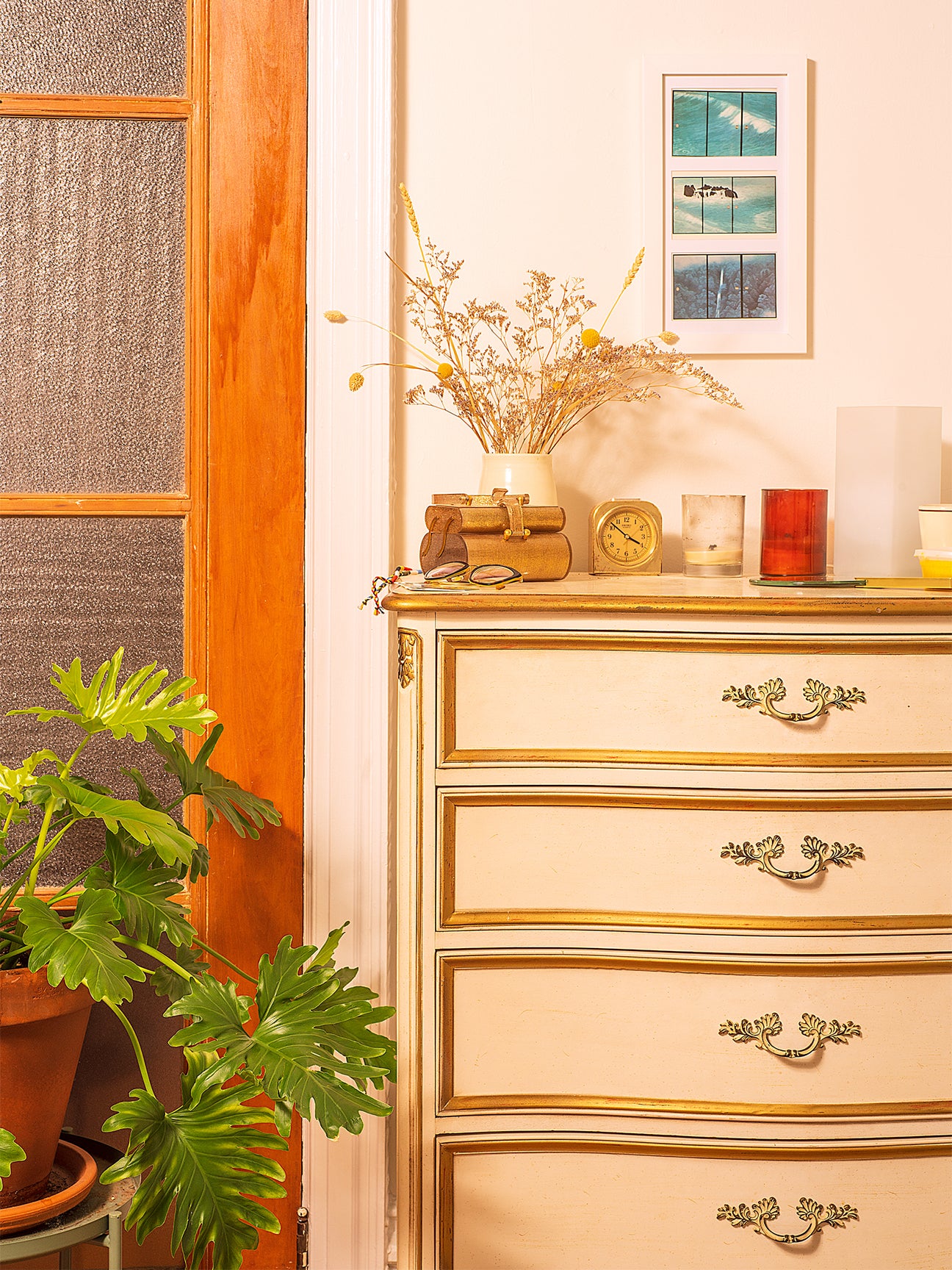 Although they didn’t realize it at the time, when Golde founders Trinity Mouzon Wofford and Issey Kobori moved into their two-bedroom apartment in Brooklyn’s Bedford-Stuyvesant neighborhood, they came equipped with all the things that would make it feel warm and personal. Well-made wood furniture that had belonged to Wofford’s grandmother would eventually be paired with all kinds of other heirlooms from the couple’s families—a pillow Kobori sewed in elementary school, a record from Wofford’s father, and more.

“For about six months before that point, we had been living upstate, where both of us are from,” says Wofford. “We had just launched Golde and wanted to be able to live a bit more affordably. So we left Brooklyn and moved upstate to a house that my mom had just moved out of and was getting ready to sell. In a classic daughter move, I called her up and said, ‘Don’t sell your house yet, I think I need to move in and run my business from there.’ While we were up there, my grandmother got sick and passed away within a short time. It was a strange moment.”

As Wofford helped her mom go through her grandmother’s belongings, she realized that holding on to some of her furniture wouldn’t just be a sentimental act—it would help her furnish her eventual New York apartment. “My grandmother was a woman of impeccable taste and style, and, of course, back in those days things were just so well made,” she says. “At first it was a situation of need, but then it became this incredible opportunity to appreciate and honor her legacy.”

It wasn’t until Wofford and Kobori saw the reactions of friends and houseguests that they realized just how special the hand-me-downs were. “People always remark when they come into our apartment that it feels so homey,” she says. “They’re often surprised that we’ve only been here for a short while.” That encouragement—and the fact that they’re bootstrapping owners of a small but fast-growing business—led them to continue digging through the troves of family members’ attics and basements for other objects that would help them to create a space of their own—and for next to no money. Here, Wofford explains how they honed in on their style, while rarely buying anything new.

We Looked at Outdated Pieces With an Open Mind

If you look around a lot of vintage stores, things might look aspirational and beautiful, but it’s the same stuff as at your parents’ or grandparents’ houses, just in a new context with a monstera plant on top.

My grandmother had a lot of stuff, and everything was kind of smushed together; it was hard to really appreciate the craftsmanship that went into each of the pieces. She also arranged things in the more traditional way, like a whole bedroom set together. We were really excited to take a few different pieces from a few different sets and find a way to make them all work together. It’s helpful to isolate items in your mind.

We Continued Digging for Extra-Special Objects

Our most recent acquisition came from my dad. He gave us one of his old record players—my parents are both musicians and he’s very serious about speakers and amps, that whole world of things. He brought it over with a couple of his favorite records and set the whole thing up for us. We use it every day. It’s so nice to have that organic, warm sound and to give yourself a break from having everything on your phone all the time.

My mom also gifted us one of her pieces of artwork. It’s a huge print, absolutely massive. I found it in her house a year or two ago and it was all rolled up. She was like, ‘Yeah, I love that piece. I’ve been carting it around with me for about 30 years.’ Unfortunately, a big chunk of it was destroyed from it being rolled up in the closet for decades. So for my birthday this year we took it to a professional framer and they sliced off the chunk that was looking a little bit funky. Now it’s this beautiful piece in our living room.

There’s so much pressure to move in and the very next week have your end tables and everything—it’s incredibly unrealistic. Even if you go vintage shopping or go through family heirlooms, it can be emotionally taxing to try to figure out how you’re going to furnish an entire apartment. It’s important to give yourself the opportunity to see this as a creative process that’s not meant to happen in a weekend.

When we do have the budget or we need something that we can’t get from a family member, we like to shop at a local spot in our neighborhood called Angl—it has really affordable vintage pieces.

There’s this sense now that Issey and I are creating our own household. We just got engaged last month; we’re starting to build our own family unit and our own memories to pass down. So decorating has become a bit more intentional. It’s about how we can take the physical mementos of our family lineages and bring them together in a style that feels uniquely our own.

See more stories like this: Why Cheesy Picture Frames Will Always Have a Place in My Home All the Best Things in This Photographer’s Home Came From Her Childhood Attic Living Alone Was Isolating—Until I Made This Change