Go forth and thrift. 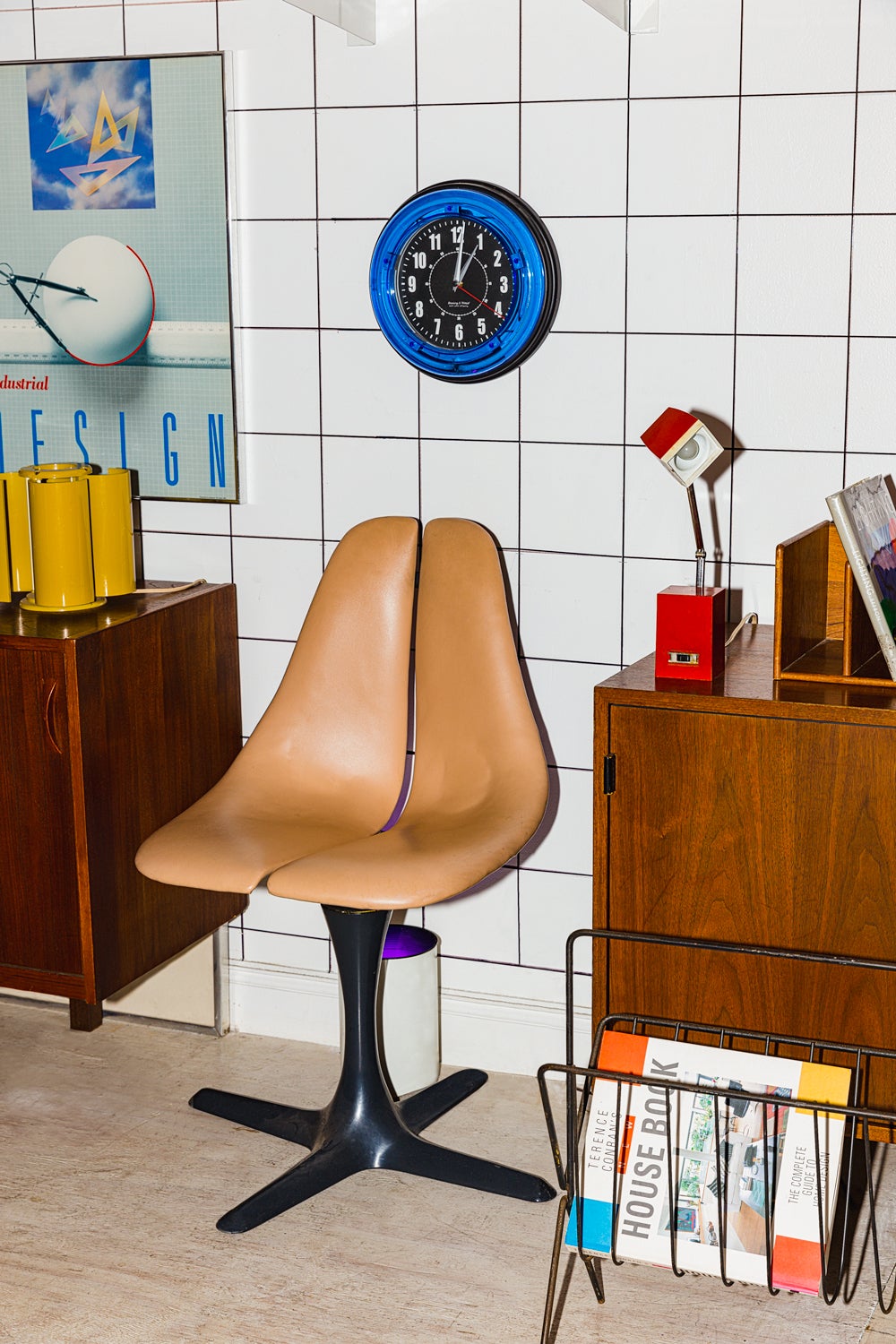 Whatever advice you’ve been given about buying something on Craigslist, it probably included a warning to “bring a friend.” And to be fair, that’s pretty solid counsel. It’s always smart to keep safety top of mind, but the idea that the online marketplace is only a hotbed for scam artists isn’t the whole truth. “I’ve met lovely people, with no truly harrowing experiences,” says Ciara Benko, whose New York City apartment is loaded with Craigslist steals. “But let’s just say that one particularly ominous visit to a warehouse in Brooklyn is enough to spook you into always bringing a buddy. Besides, it never hurts to have a second set of hands!”

At its best, Craigslist is a treasure trove of bespoke goods and charming antiques; a virtual flea market, if you will. Anyone can find incredible bargains—it just takes a little patience and know-how. In the hopes of demystifying the platform, we turned to a few experts, including Madison Brill, Los Angeles-based interior stylist, sourcer, and founder of ILoveCraigslist, to get the scoop on their best practices.

Be Strategic About When You’re Searching

Otherland founder Abigail Stone relied heavily on Craigslist to fill her Manhattan apartment, and she attributes much of her success to knowing when to search. The best time to hunt? The last two weeks of the month. “Often people won’t get around to listing their furniture until right before their lease ends,” she explains. “It can be easier to get a bargain, too, because there’s a finite date for the seller to offload or they’ll have to deal with the hassle of moving it.”

If you’re a more casual Craigslist scroller, Brill recommends spacing out your searches to keep the thrill alive. Especially in a city like New York where the volume of listings is higher. “You don’t want to search every second of every day,” she advises. “It kills the dopamine hit when you aren’t able to find exactly what you’re looking for.” What she does recommend is that you scan the site for moving sales. More on that later.

A great deal of the frustration that arises from Craigslist shopping is the sheer number of products to weed through. To eliminate the headache, it’s important to curate your search, and there are myriad ways to do this. Former Domino editor Alex Redgrave recommends searching for the place of origin (think: Sweden or Copenhagen if it’s the Scandi aesthetic you’re after).

For the more patient shopper, Brill believes that the real scores come from the people who don’t know what they have and that the “magic is often in the misspellings and mislistings.” Going too narrow with a designer name or description could throw you off track, so she suggests keeping your search terms broad and mixing things up. Try searching for “couch” in addition to “sofa,” or make things either plural or singular (“chair” versus “chairs”) to cast a wider net. If you are hunting for something very specific, Brill says your best bet is to search by time period, like Art Deco or mid-century modern, for example.

“I only use the app,” Brill says. Not only does it give you something productive to do when waiting in line at the DMV or dry cleaners, but there are two features she says are really clutch. Only the app lets you favorite the items you want to keep an eye on, and there’s a chat feature that allows you to quickly and easily converse with the seller, so you no longer have to obsessively refresh your email waiting for a response.

“If you find a seller with rad stuff, click the link that says ‘more from this user,’ and it will show you everything they are selling, which may include more rad stuff,” offers designer Jesse Kamm, whose minimalist L.A. office includes some cool pieces sourced from the marketplace. Rather than start a brand-new search, consider each seller as a mini boutique that specializes in a certain style. This way of searching has a secondary benefit: “Sometimes you can negotiate a lower price if you buy multiple things at once,” adds Benko.

Similarly, Brill recommends scoping out the surrounding items in the photos for anything that might catch your attention. “I’m not just looking at what’s listed, so I’ll email people, saying, ‘I know you’re listing your coffee table, but is your rug for sale?’” And more often than not, she finds many people are willing to cut a deal on unlisted items, too. Her favorite success story? After falling in love with a vintage headboard that was snagged on Kaiyo before she could make a move, she spotted the same piece in the background of an old bed ad on Craigslist. For the record, Brill doesn’t recommend buying used mattresses, but the seller was happy to accept her offer on the headboard and the matching nightstands (pictured below).

Go Ahead and Nitpick

Do your due diligence. Benko suggests emailing the seller to ask for more photos and information if there is only one image in the ad. Adding to that, Brill recommends asking questions to find out where the item is from (if the brand is not listed), how long they’ve had it if they’re the original owner, and why they’re selling. It helps her determine the value of a piece and the legitimacy of the seller. But there’s an art to the inquiry, she says. One caveat: “If it’s a really good deal, don’t ask those questions off the bat,” she advises. Asking too much too early could bump you down the ranking of potential buyers if someone else is willing to grab it no questions asked. Wait until you’ve already negotiated the deal or are going for the pickup to get your follow-ups in.

Just because this isn’t an IRL flea market doesn’t mean you can’t indulge in a little haggling—just be polite about the way you do it. “Everything’s negotiable,” Brill says. “But I never negotiate in person.” Email is always best. Unless the item is not as described when you show up, it’s unfair to try and negotiate in person—it makes most people uncomfortable and could come off as disrespectful to that person’s time.

Benko adds that your ability to negotiate the price down may have to do with timing. “Check how long the item has been available. If it’s been up there for a while, I usually will lowball the price because they’re trying to sell it ASAP,” she says. “OBO (or best offer) means that you can throw in your bid and then negotiate back and forth from there.” She also notes that ads will often include a link to the original item they bought. Always check it out to see the original price and use that as a negotiating tool. “Never pay close to full price; after all, this is Craigslist,” she says.

Sleep on the Moving Sale Section

There’s a hidden gem on the Craigslist website, and it’s parading under the “garage sale” link in the general “for sale” category. This is the moving sale portion, and it’s often where you’ll find both the best deals and widest variety of items. Redgrave is a regular of this portion of the site and suggests checking on a Thursday, since people usually hold these moving sales over the weekend.

“I map it, so if there are a few in Williamsburg or Greenpoint, I can walk around and visit a few,” says the Brooklyn local. “Moving sales are where I got all my plants. It’s a cool idea: People who are leaving the city, passing on their things to the next residents.”

Judge a Listing by Its Photo

Sometimes, the worse the photo is, the better the deal, according to Brill at least. She doesn’t let a poor picture or description steer her away. Most people aren’t harnessing their inner stylist or photographer when creating a Craigslist post, so Brill tends to ignore the photo quality and instead focus on the environment. “It tells you more important things like the type of household you’re buying from,” she shares. “I won’t buy something from a photo where the entire living room is really messy because you can instantly assume they haven’t taken good care of their things.”

Take Something at Face Value

Whether or not you are an avid DIYer, remember that most things can either be reupholstered, repaired, or repainted. Brill believes refurbishing something that is well made (like most vintage pieces) retains more value than buying something new. A favorite reminder for Brill is Jenna Lyons’s pink velvet sofa—which the designer snagged for free off the street, reupholstered, and regularly shows off on Instagram. On Craigslist, however, the key is to keep this extra work in mind when negotiating the price.

Don’t forget this basic but important last step. Most Craigslist sellers are not professional retailers and likely don’t have a credit card–reading machine at home. “I’ve started bringing a little extra just in case, because you never know what else they’re trying to get rid of that would look perfect in your home,” says Benko.

However, you can ask if they accept Venmo, which Brill uses often. But she warns that whether you’re buying or selling, if someone exclusively deals with either cashier’s checks, Zelle, or CashApp, there’s a 95 percent chance it’s a scam. “They have fewer safety measures,” Brill explains. “Once payment clears, they can block you.”

Okay, not to sound like your mother, but consider this your final safety reminder. “Make sure you send the address you are going to to someone who loves you—just in case,” says Kamm. Yes, most Craigslist appointments are totally safe, but if you ever get weird vibes from a seller’s space, don’t go in. “If it’s a smaller item, have them bring it out front into the yard,” she continues.

Brill also always makes it a habit to look up the location ahead of time and scope it out on Google Maps. There’s a big difference between meeting outside a home in a well-populated area and meeting at a random warehouse in a remote location. Thanks to the chat feature on the app, you can also opt out of exchanging phone numbers as an added precaution. If it’s a smaller item, ask to meet the seller outside. And yes, it’s always a good idea to bring a friend. At the very least, they can talk you down from impulse buying something else you don’t actually need.