Early to bed, early to rise. 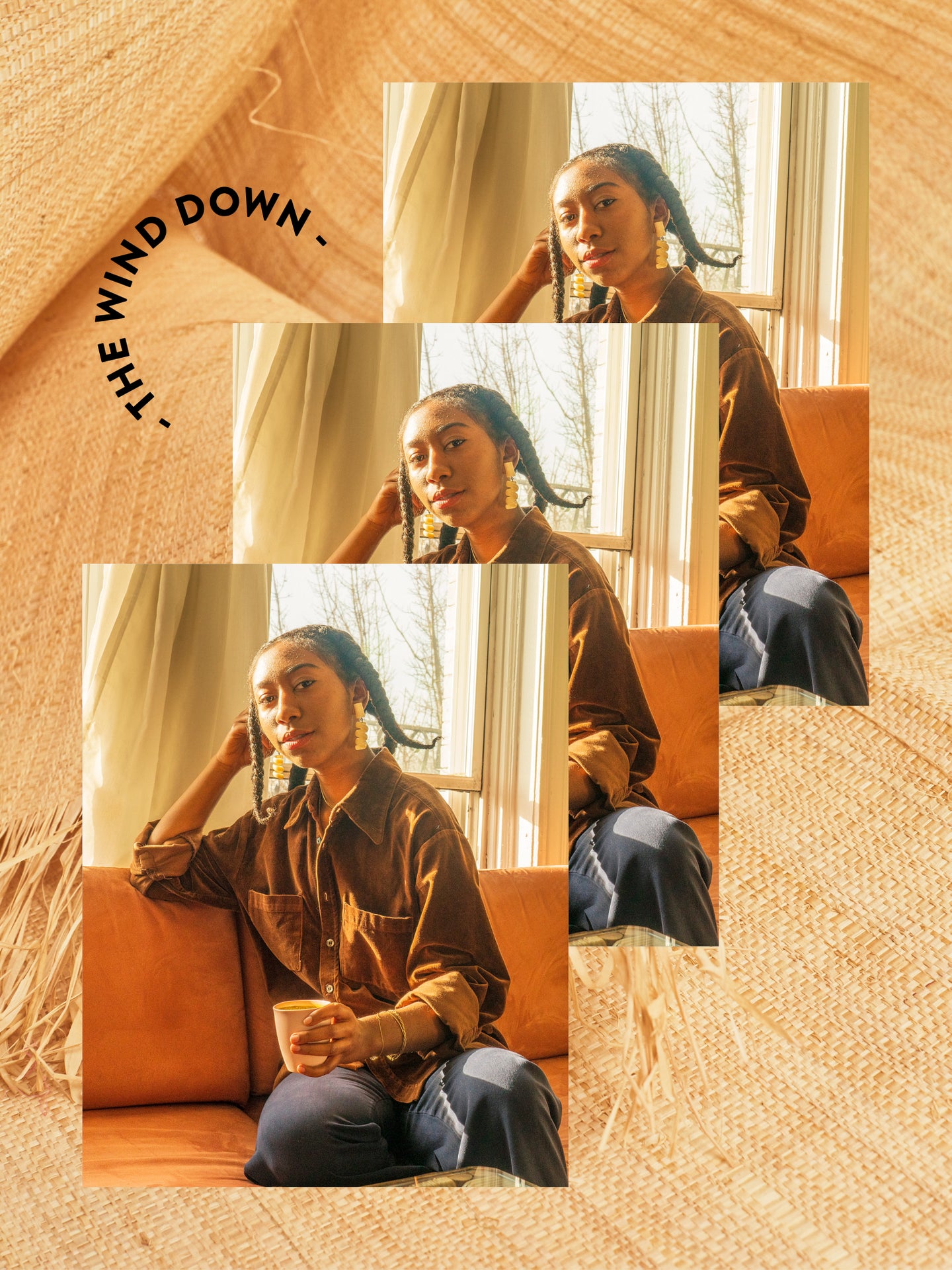 We spend a third of our lives asleep—that means our bedroom is the most lived-in space in our homes. It’s the room where we start and end our days, and that’s why the rituals that happen there are extra important. In The Wind Down, we’ll be exploring the nighttime routines of people we admire and taking their advice to make the moments just before bed feel our best.

When you’re running a business you’ve built from the ground up—especially one that you’re running from your own apartment—it’s important to make time to relax and decompress. For Trinity Mouzon Wofford, the founder of Golde (you know, those pretty turmeric latte kits and newly launched face masks?), turning that switch is a cinch.

After shutting off her computer for the day, Mouzon Wofford makes sure to leave her apartment to get some fresh air, fresh bread, and plenty of inspiration for the next day to come. A home-cooked meal, a simple-yet-effective beauty routine, and a good, fluffy robe help her get ready to settle in for the night. Tomorrow brings yet another day of innovation and boundary pushing.

Below, she shares her wind-down routine in her own words.

Log off: I’m definitely more active in the morning, so I try to wrap up everything that I’m doing with work by 5 pm. I know that’s kind of unheard of in New York. When it comes to your work style, I think it’s a matter of knowing when your brain is most active and effective. I work from home with my cofounder Issey, who’s also my longtime boyfriend—we’re in an apartment in Bed-Stuy together, and it’s important to kind of make that shift from being on the clock. Computers and phones pretty much go away once work is done.

Take a walk: We’ll try to get out of the apartment for a bit and go for a nice walk around the neighborhood. So often, because we work from home, we might not even leave for the entire day. So it’s really good to just get outside for an hour and stretch a little bit.

Grub hub: We’ll stop by Saraghina Bakery, which is around the corner from our apartment, to grab some sourdough bread for dinner. Then we’ll make our way back to the apartment. I help Issey cook dinner—I’m definitely more of the assistant. We do a lot of very local, seasonal vegetables. We have a pretty strict farmers market ritual every weekend. We cook anything from a pasta dish with mushrooms sauce to salmon with veggies on the side. We like to have heavy dinners because during the day, we’ll usually do a smoothie and then a salad. Sometimes we’ll have a glass of wine with dinner—like every other person in Brooklyn, I am on a big natural wine kick.

TV dinner: I feel like this is so wrong, but we just eat dinner on the sofa with Netflix on. We see so much of each other during the day, so it’s fine to zone out for a bit. Lately, our TV of choice is Game of Thrones or SNL because I usually don’t get a chance to watch it because it’s on too late for me. If nothing else, we’ll watch Seinfeld reruns for eternity.

Multitask mask: In the colder months, I’m more of a morning shower person, but now that it’s getting warmer, I think I’m kind of transitioning over. If I’m doing an evening shower, usually I’ll start with one of the Golde superfood masks. I just alternate between the two, but they’re pure superfoods and they’re a powder extract that you just add water to. So I’ll just take a teaspoon of whichever mask I’m using, put it in a little dish, add a couple of drops of water, and put that on. I just leave it on for about 15 to 20 minutes until it’s dry. Then, I’ll get in the shower and rinse it off.

Wash up: As far as the shower routine goes, it’s pretty minimalist. I’ll basically just wash my whole body with African black soap, which I get at the local beauty supply store in my neighborhood. Then, if I am doing anything with my hair, I’ll use conditioner by Giovanni. It’s very moisturizing and really, really good for curls. Sometimes I’ll do a scrub if I’m feeling fancy, which just means combining Domino sugar in a bowl, adding olive oil, and rubbing it all over myself.

Skin saviors: I don’t like to use a lot of products. I mist my face with whichever facial mist I happen to have on hand. My favorite is Marie Veronique’s probiotic one. But sometimes I just like the Heritage Rose Water everyone has. I’ll just moisturize with this shea butter–based cream on my face from this Japanese company called Chidoriya I really like Esker’s Restorative Body Oil. It smells incredible. I think half the reason I use it just because it makes me smell like this ethereal creature.

Robe life: Then I get into my robe, which is my favorite thing. I’m all about the robe. I got one for my birthday in January and I didn’t know how much I needed one before then. I previously got out of the shower and ran around with my towel wrapped around me, but it’s so much better to be enveloped in this soft, luxurious robe. I’m completely a robe convert.

Snack attack: I definitely have a sweet tooth, so oftentimes I’ll make popcorn at home and top it off with a ton of coconut sugar, which is a little bit better for you than regular sugar. I’ll have that as my [version of] healthy kettle corn. I also really love to have our cacao mix at night, so I’ll have that with hot water. It does have some caffeine in it, but not too much, so it doesn’t keep me up. Cacao has this ability to tap into the same receptors that CBD does, so it’s a natural stress reliever.

Sweats vs. pajamas: I’m definitely more on the old sweats side of things. I usually sleep in boxer-type underwear and some old shirt that has holes in it from when I was in college. I’m the most low-brow sleeper possible.

Best bed: I like an all-white bedspread—it makes sense to me. I really, really like Parachute bedding. I have one set, but I wish I had more—it’s really good. I try to only sleep with one pillow because I was told that like you shouldn’t sleep while propping your head up too much because that messes with your posture. I try to only use one because I don’t want to end up with a hunchback, which is what I’ve been told what would happen

Sparse space: My bedroom is very bare, and there’s nothing in it besides a bed and my dresser. It’s not really a hangout spot, which I think is kind of nice because the bed is really just for sleeping.

Aroma therapy: I’m a big, big candle person, and conveniently my boyfriend’s parents own a candle company, called Kobo in upstate New York. Cool. So, we’ve got a nice perpetual supplies of candles in our apartment. We usually have one candle going at all times. The company just came out with a new line last year that I’ve been really into. One of the scents is called Immortal Oolong. So it has oolong tea, sugar, and jasmine. It’s so lovely.

Reading rainbow: I just started reading this Georgia O’Keeffe biography. It opens up talking about how she was raised on the prairie and how that landscape was really impactful for people coming there from east coast cities like New York. It’s really fascinating. I used to be a nonfiction-only person. Now I read a good amount of fiction. I really like historical fiction, so I could learn a lot from stepping into the world of the book that I’m reading, but it doesn’t necessarily have to be based on a true story. I’ll read and then conk out at, like, 10:30 pm.