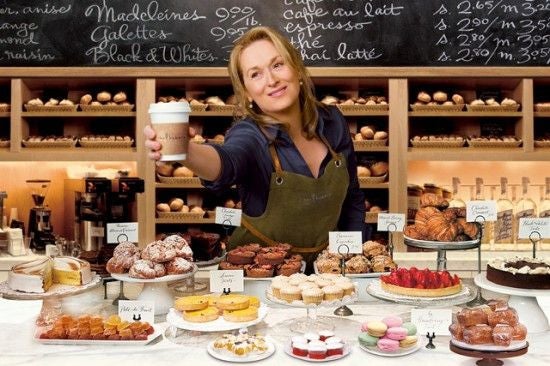 For the “I’ve Always Wanted to Own A Bakery” Foodie: It’s Complicated

This film is two treats in one—not only will you crave every delicious pastry but you’ll want to move in, too!  We can only dream about how delicious those chocolate croissants taste and wish we could steal Meryl’s dreamy coastal California-meets-Tuscany dream house. Yes, the plot is funny and charming, but it’s this film’s set-design eye candy that will leave you hungry for more.

For the Food Truck Foodie: The Chef

This lovable flick with an all-star cast takes a back-to-basics approach to food, and proves that following your gut (pun intended) trumps celebrity and even tradition. In addition to a focus on delicious Cuban cuisine, this film is heavy on family—especially the bond between father and son. Mouth-watering food AND a happy ending? Yes, please.

Yes, there’s food in the title, but this heartwarming classic is about so much more than tomatoes. Practically every major scene is accompanied by food that we only wish we could be eating right now—like slow pit-cooked barbecue and and old-fashioned southern-style diner classics. And even if you remember nothing else about the film, yes, those fried green tomatoes look delicious too.

For the Romantic Foodie: Chocolat

There’s a reason this film is regarded as one of the all time greatest foodie flicks (and not only because it has ‘chocolate’ in the title). What’s not to love about romance with a vintage French vibe, cozy old-world scenery, and of course, chocolate? Absolutely nothing.

For the Julia Child-Fan Foodie: Julie and Julia

Julia Child is a beloved icon and undoubtedly demands her own brand of foodie followers. In this delicious film, Meryl Streep dazzles as an adorably hungry Julia Child who lives for good food. You’ll fall in love with her cheeky charm—and want a taste of everything she’s cooking. From restaurants to cooking school to her own at-home kitchen, you’ll be hooked (and hungry!) from bite, er, minute one.

You simply have to admire Julia’s all-in approach to no-holds-barred indulgence during her Italian travels. Oh, the pizza! The pasta! The gelato! Yes, we’ll have EVERYTHING she’s having.

For the Lighthearted Foodie: Ratatouille

This is one animated film that both children and adults alike will go crazy for. When a simple dish of ratatouille touches a nostalgic cord with an unfeeling food critic, it brings to mind our own childhood foodie faves (um, mac ‘n cheese, anyone?). And while we’re not exactly sure what the kitchen of a five star French restaurant looks like, this is totally what we’d always imagined, right down to the white hats and copper cookware. Très chic!

For the Comeback Kid Foodie: Burnt

Fans of behind-the-scenes restaurant drama will fall for this comeback story of a disgraced chef—played by Bradley Cooper (swoon)—fighting to make a comeback on the world-class culinary scene. With plenty of kitchen chaos to go around, and a budding chemistry between chef and sous chef, this film of culinary-themed drama-light is a must-see for sure.

For the Romantic Comedy Foodie: No Reservations

Not to be confused with the salty Anthony Bourdain series of the same name, this lighthearted rom-com is lovable fun with food taking center stage. With a happy ending and plenty of foodie fun for all, this remake of “Mostly Martha” is the perfect mix of romantic and delicious culinary imagery.

For the Family-Style Foodie: Under the Tuscan Sun

Any film based in Italy is sure to feature some seriously scrumptious food scenes. We’re especially loving the large tables of family-style dining happening here, complete with big platters, open wine, flickering candles, friends, family, laughter, and noise. It’s always a celebration, and we wish we’d been invited too.