I Built My Dream Home in Bali Totally From Scratch

How writer Kathryn Romeyn made it happen. 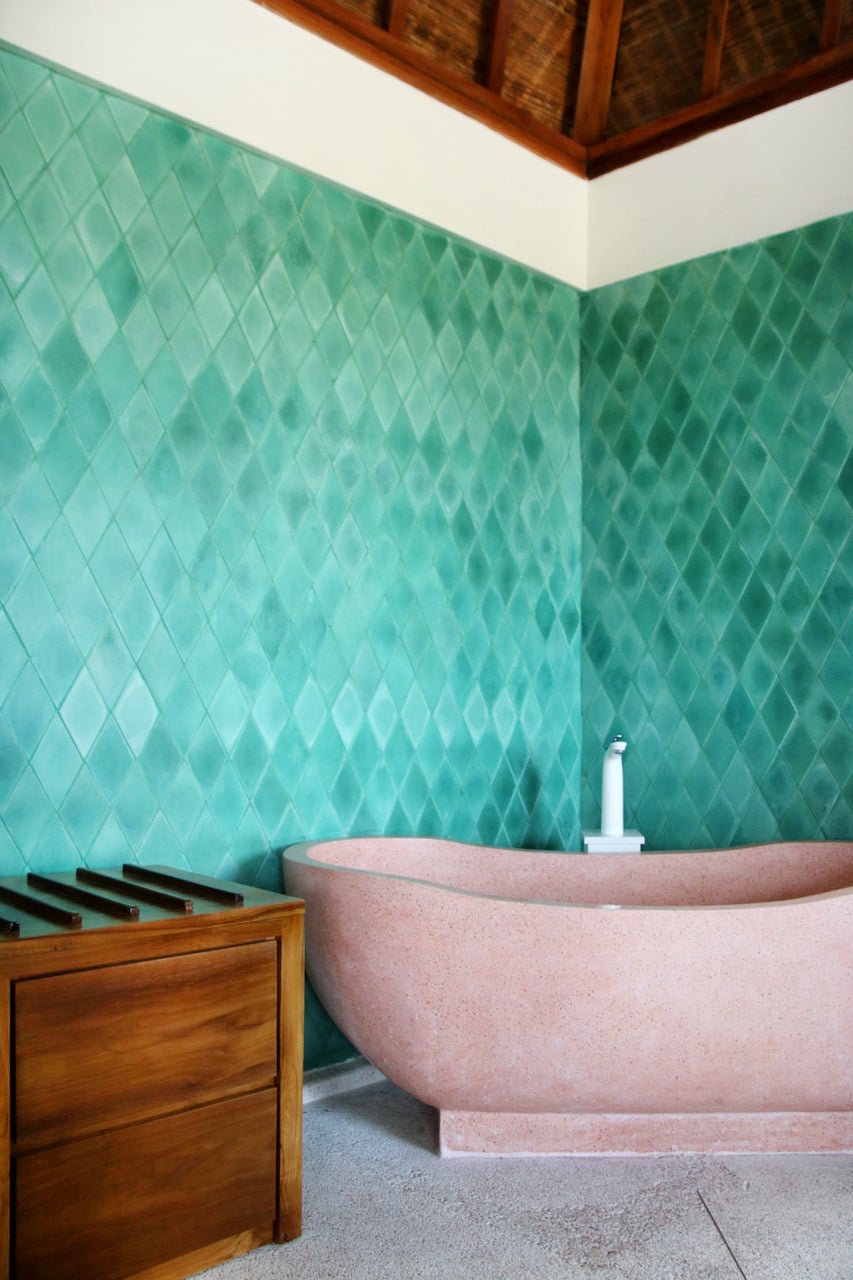 When you imagine your dream home, you probably envision a specific number of rooms, or maybe a certain standout feature, like a library or grand staircase. But for Kathryn Romeyn, location was the key to everything. Her dream home was in Bali—all she had to do was build it.

“My first trip to Bali changed my whole life,” she says. “It was the first place I traveled to alone. I had been working as a magazine editor, and the publication folded and I got laid off. I had gone through a breakup. Bali really touched me, so I kept going back every year. It was my happy place from the beginning.”

Romeyn’s plan had been to buy a place in her hometown of Los Angeles, but everything she liked was out of her budget. When she realized the major price difference between land on the island and L.A. real estate, she was struck with the idea: Why not build her own home in Bali? With the help of her father, a builder based in Georgia, and her friend Luc Berne, an architect, she constructed an airy indoor-outdoor retreat over the course of just one year. Now she spends about half of each year at the house, dubbed Bali Kali Kubu, basking in her totally customized surroundings. Here’s how she did it.

When Romeyn started her search for land to build on in 2016, she already had a specific neighborhood in mind: “I had always stayed in this particular area of Pedang Pedang, which is in the Bukit Peninsula. It’s less touristy and less crowded—it’s really a surf destination,” she explains. Someone tipped her off about a piece of property available nearby, and she snapped it up—but it’s not technically hers. In Bali, foreigners aren’t allowed to own land permanently; it can only be rented.

The prospect was nerve-racking—but Romeyn quickly grew close with the owners, who also happen to be her neighbors.

Building a home can be a tedious, years-long process, but Romeyn struck good luck with her project. “We started construction on the house itself in November—we were rushing to start before rainy season. I wanted the house done before my 35th birthday, which was November of next year,” she says. The process started and ended with Hindu blessing ceremonies, which are traditional in Bali (you don’t want to build a home without getting a karmic go-ahead). By July, the house was finished—just in time for Romeyn’s birthday.

Romeyn and her father drafted up their preliminary blueprint for the home and worked with Berne to bring them to life. Ultimately, she wanted the architecture to feel inherently Balinese. “One of my favorite features of a lot of Balinese structures is the vaulted ceiling with exposed beams and rattan on the back. That was something that from the beginning I identified as a focal point that I wanted to have in the house,” she says. “I also wanted it to be really breezy, airy, and open to the outside.”

Other must-haves: plenty of room for visiting friends, a place where Romeyn could practice yoga, and a lap pool (her sister’s request). The solution for all of these features came in the form of one innovative outdoor space.

“I told my architect that I wanted some part of the pool that was shallow, so I could lay in it and read. He came up with the most brilliant way of approaching that, creating a shallow extension in the shape of a T that runs under the house and separates the main part of the home from the yoga shala,” she says. “The whole living room opens up to the pool, so you feel like you’re outside all the time.” Murals painted by Priscilla Witte take the vacation vibes to the next level.

As with all major construction projects, though, there were bumps along the road that required some quick thinking. “When building first started, my connecting flight from Australia to Bali was canceled because a volcano was erupting. The first time I got there was four months into the build, and we had two frantic weeks in which I had to choose all the materials, all the light switches—everything like that,” Romeyn says. “It was a challenge for me to not have total oversight and let go a little bit and trust that it was going to happen.”

“Everything in the house, except for maybe my hair dryer, is from Bali,” Romeyn says. “The very first time I went to the island, I wanted to buy everything and bring it home. They have such incredible craftsmanship and such incredible design, from wood carving and fabric weaving to stonework and tile. I wanted to fully embrace that and really make a purely Balinese home.”

Of course, sourcing everything locally comes with its own set of challenges. “There’s no IKEA; there’s not a big store you can go to and find all these things in one place. It was literally me on a scooter, riding around and pulling over if I saw something in a window that looked cool,” she remembers.

Romeyn saw it as an opportunity to work with local artisans to make the furniture as custom as the architecture. “I found a picture of a bed that I loved on Pinterest; it had these big, chunky legs—but there’s nothing like that already made in Bali. So I found a guy who could make that bed for me. He spent a couple weeks finding pieces of reclaimed teak that were big enough that he could carve into those shapes and create that bed.”

With all the tough choices behind her, Romeyn now has her very own oasis. “The reward is so immense. I still get a chill every time I pull into my driveway—I can’t believe it’s mine,” she says. “It’s incredible to wake up and  be in this house, where I had a role in every single detail.”