The door no longer smacks into the vanity. 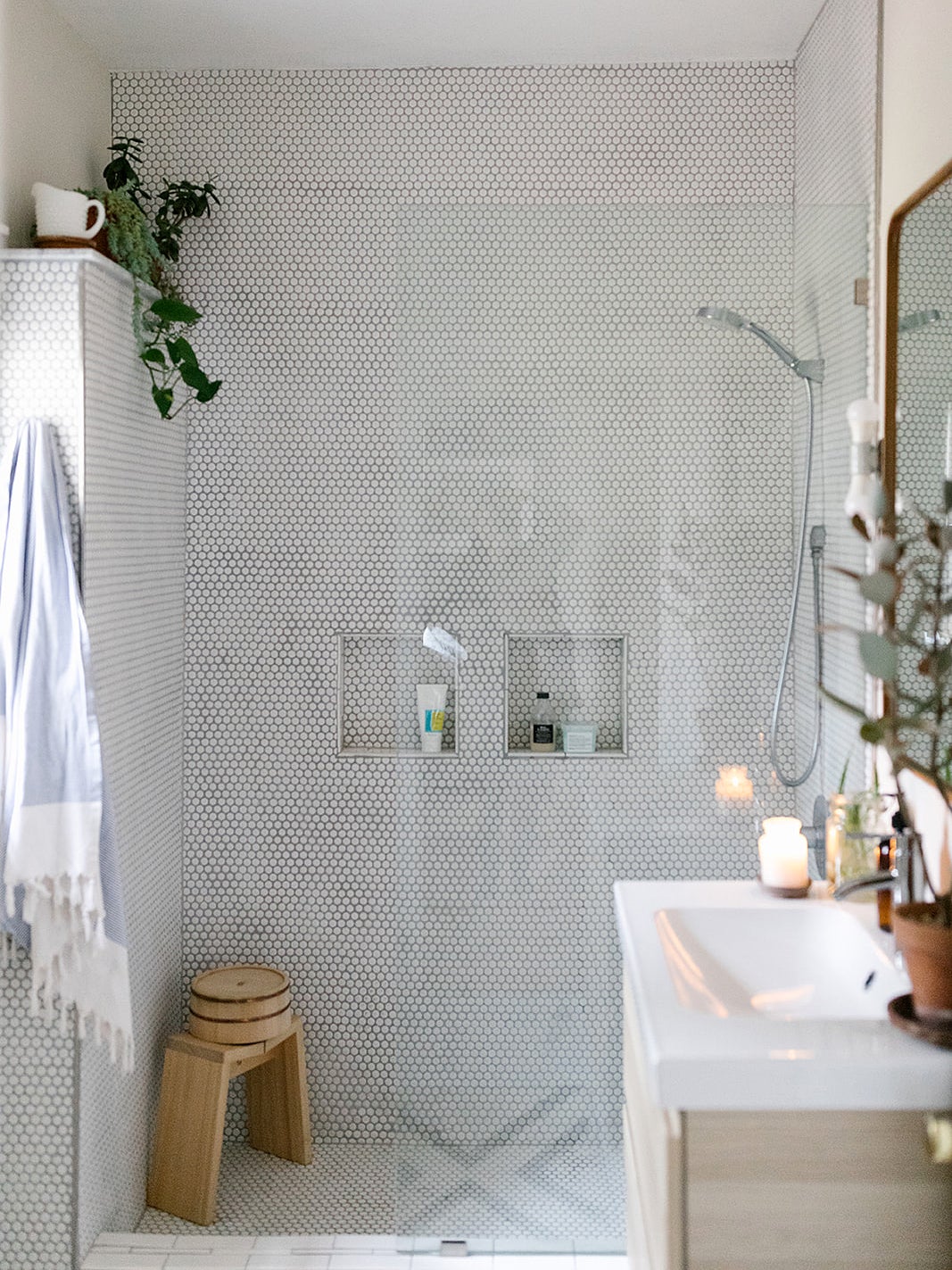 You know your bathroom is tiny when you can’t even open the door all the way. For years, Domino’s deputy commerce editor, Samantha Weiss-Hills, had to enter her Indiana bathroom with caution as to not knick her vanity. Eventually, she resorted to sticking a foam pad on the one side as a layer of protection until the day came when she and her husband, Alex, decided it was time to start fresh. “Even the shower made the space feel smaller than it was,” recalls Weiss-Hills. “It took up so much room and the curtain caused it to feel dark—you couldn’t tell there was a window in there.”

Fortunately, Weiss-Hills’s dad works in construction and lives only an hour-and-a-half drive away. He offered up a week’s worth of his time to help the couple update and, more importantly, rescale the fixtures in their home’s one-and-only bathroom so they could finally enter it with ease. Having the extra hands also allowed them to pull the whole transformation off for $7,000. Once all the materials were on-site (i.e., piled up in the pair’s dining room and basement), it was game on.

A Penny for Your Thoughts

Weiss-Hills’s architect, Andrew Heathfield, was the one who originally suggested swathing the shower in penny tile. His reasoning: The hexagon-shaped option was a popular choice in the early 20th century, so it would be a fitting pick for the bungalow, which Weiss-Hills guesses was built right around then. To save on costs, they sourced the material from their local Home Depot. “We were like, what’s the difference between white penny tile from a hardware store and white penny tile from a fancy brand?” she shares.

Her dad was less enthused with the idea. “He told me, ‘I would have charged you so much for installing this if you weren’t my daughter,’” she says with a laugh. Cutting the sheets of delicate little hexagons is time-consuming, as is the grouting (they opted for a cool gray for some contrast). In fact, ultimately it proved too tricky to cover the shower ledge with the material, so they laid subway tile down on the bump-out instead.

While the bathroom’s footprint is exactly the same, it looks like they gained a few extra feet of space because there’s no longer a fiberglass tub and curtain bisecting the room. The glass partition (a $300 Wayfair score) allows sunlight to reach every corner, including all the small potted plants on the tippy-top shower shelf. The perch is topped with a scrap piece of marble the couple got for free when they were purchasing other reno materials at Hoosier Carpets Plus.

Replacing the old sink vanity with a slimmer, wall-mounted option from IKEA meant that the couple no longer had to tread lightly when entering the bathroom—they could swing the door open without hesitation. And because the two drawers offer a lot more usable storage than a vast cupboard, they didn’t need to mount a bulky medicine cabinet on the wall. Weiss-Hills’s splurge-y swap: a statement oakwood mirror from Rejuvenation. “We had a lot of oak in the house, plus my dad has made furniture for me throughout my life out of it, so it felt right,” she says.

During a trip to Japan, the couple loved the ritual of using bathing buckets so much they decided to buy one for themselves; it sits in a corner of the shower. “You can douse yourself with water or sit on the stool and shave,” says Weiss-Hills. “We appreciated that, and we also wanted something that reminded us of our time there.” If the new space wasn’t enough encouragement to zen out, this touch definitely is.