Plus four more staples in his space he can’t live without. 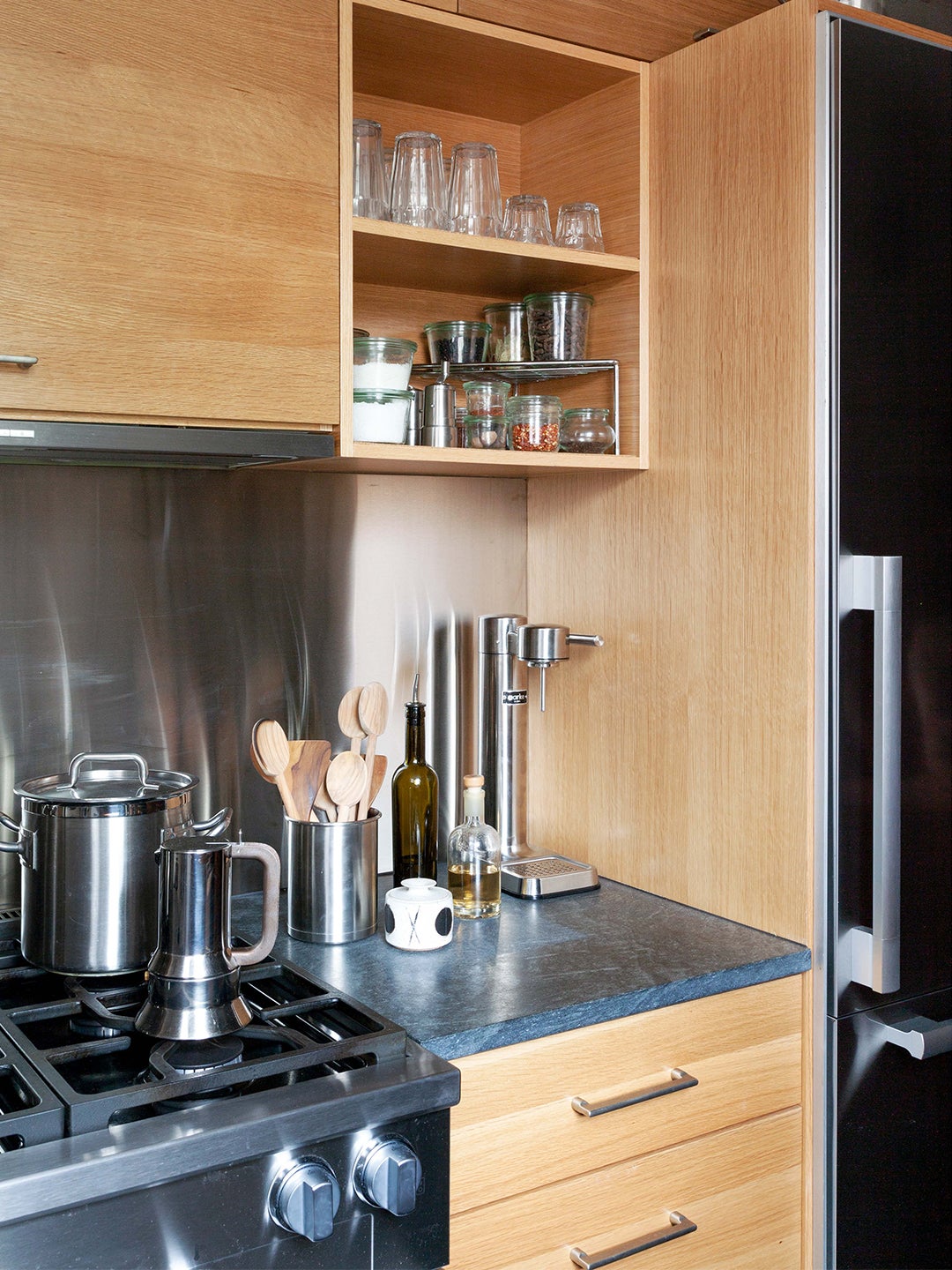 Brian Maiorana was sitting in the living room of his Brooklyn Heights apartment when he heard an unsettling, waterfall-like sound coming from his 125-square-foot galley kitchen. It didn’t take long for him to confirm his fear: The dishwasher was leaking. “That was the final straw,” recalls Maiorana, the regional vice president of Toast. But in a real turn-lemons-into-lemonade moment, he decided that if he was going to have to replace the broken appliance, he might as well tackle all the other upgrades he’d been itching to make. Maiorana didn’t just want any shiny-new space, though—he wanted a chef’s kitchen.

While the term gets thrown around a lot in real-estate listings to describe a space with an eight-burner stove or an enormous island, Maiorana’s version is functional not flashy. After working in the restaurant industry for 16 years (he started out busing tables in Connecticut and running Barbara Lynch’s catering company before a nine-year stint at OpenTable), he understands all the features that go into making meal prep a breeze. Maiorana called on architect Leah Solk and Hakka Contracting Inc. to turn the tight space into a cook’s sanctuary.

Solk is Team Drawers over Team Cabinets for the simple fact that you can get to the things you need without breaking your back. The designer maximized Maiorana’s storage with a long stretch of lower drawers of varying depths. The ones on the bottom are the deepest and best for stowing pots and pans; the middle tier is a bit smaller and ideal for plates; the top sections are where Maiorana can house flatware and other shallow tools. Solk finished off the oak millwork by E-Wood Cabinetry with chunky pulls that are easy to grab, even with oily fingers.

Maiorana’s splurge of choice was sourcing all new appliances from Germany-based manufacturer Miele. Part of the hefty price tag (a 30-inch gas range starts at $6,200) is the life expectancy: They’re built to last 20 years. And while the idea of having a touch-to-open refrigerator door sounds like a small thing, Maiorana says the little luxury is a game changer. “It’s like opening the door of a Mercedes,” he says with a laugh. As for the range, it was a numbers game: It puts out 19,000 BTUs on three of its burners and the broiler churns out evenly cooked steak and pork chops every time. “You can get that incredibly intense wok-cooking temperature to get a perfect sear. It’s not going to burn one side,” explains Maiorana.

Maiorana debated installing fancier open shelves in his newly transformed space but ultimately decided to stick with his existing Metro shelves. “With the glasses and whiteware, they’re beautiful. Plus they keep bugs away from things,” he notes. Maiorana tasked a maker in nearby Industry City with topping one of his rolling cart units with a 2-inch-thick slab of maple so he could enjoy even more prep space. He kept the industrial feel going by adding smaller shelves and racks from Rosle to hold mugs and hang measuring tools. The small stone overhang that extends from the backsplash also comes in handy for spices. “Even though it’s a galley, it feels very spacious because everything’s lifted up,” he adds.

Stainless steel might be the go-to countertop choice for a restaurant kitchen, but it can look out of place in a residential setting. Maiorana’s honed Pietra Del Cardosa surface strikes a balance between durability and style. “It’s a really robust stone that doesn’t chip or stain easily,” says Solk. “It’s a great option for people who actually use their kitchen.” Adding separate task lighting from Vipp over the prep area promises that no wonky shadows get cast on the dark Italian sandstone. “There’s nothing worse than having oppressive lighting over you while you’re working,” says Maiorana.

While Maiorana’s cooking habits were certainly top of mind during the renovation, so were his cleaning ones. “When he’s frying and there’s a lot of aerosol fats in the air, they just go everywhere,” notes Solk. “He was spending hours cleaning, and for an organized person that’s really frustrating.” So instead of relying on the drywall as the stove’s backsplash, they mounted a sheet of easily wipeable stainless steel, initially prototyped by Reuben Bechtold and manufactured by Advanced Sheetmetal and Mechanical.

Up above, the recirculating hood is expandable so that Maiorana can get full coverage when needed. The designer also swapped out his Louis Poulsen pendant lamp, which tended to collect grease between its shades, for a streamlined globe flush mount that throws evenly dispersed lighting. And for when Maiorana needs to set a wet pot down, he can do so right next to the sink—there are grooves carved into the countertop that drain right into the basin. “It’s a way to avoid a disastrous water situation,” says Solk. He definitely doesn’t need that again.

4 Tools This Seasoned Cook Swears By

“Le Creuset has the best pieces to work with, especially the frying pans. I have a few vintage pieces in my collection that I bought cheap on eBay.”

“I don’t know if I would want to live without my Vitamix or my KitchenAid.”

“I probably have three dozen stainless steel bowls, because when you’re cooking and in the midst of it, do you really want to wash a bowl? I could probably teach cooking classes out of here with ease because of the amount of equipment.”

“One of my favorite things is my pepper grinder called the Little Cranky. It has a big shutter door that you can open and fill it up really quickly. It’s one of those tools that never breaks down.”