A reno made possible without an architect or contractor. 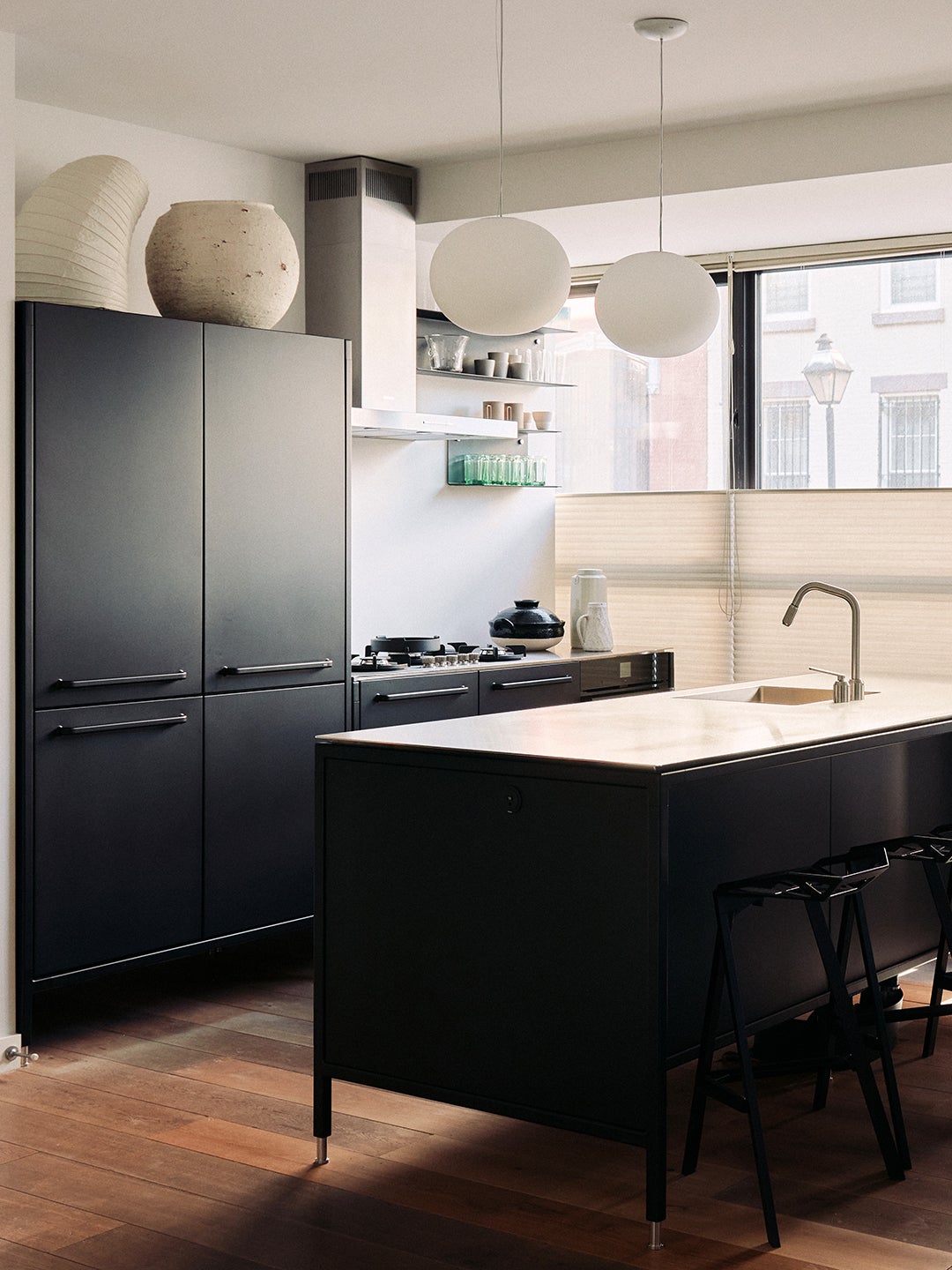 Spencer Bailey thinks a lot about time. The New York–based writer and editor—who served as editor in chief of Surface magazine for five years and is set to publish his second book with Phaidon, Alchemy: The Material World of David Adjaye, this July—is so fascinated by it that in 2019, he and filmmaker and creative director Andrew Zuckerman cofounded a media company called The Slowdown and debuted their hero podcast, Time Sensitive. Each week, the duo releases an interview with leaders in business, the arts, and beyond, discussing time on a philosophical level but also how they make use of the real thing every day. Bailey has forged a career centered on taking pause—and yet he renovated his Brooklyn Heights kitchen last year in literally no time.

After living with the same builder-grade space for nearly 10 years, the flaws had really started to show: The push-to-open drawers were becoming demagnetized, the medium-density fiberboard cabinets were noticeably flimsy, the improperly sealed marble counters were stained. “I really liked the idea of a modular kitchen; something that could be inserted like furniture,” says Bailey. Vipp, a manufacturer out of Denmark, is known for its building block–like designs—but Bailey and his partner, Emma Bowen, weren’t just drawn to the brand’s “fewer, better things” ethos. Once the components were delivered—appliances, floating shelving, and all—they could be installed in just two days. “It’s like someone parked a sexy matte-black Mercedes in your apartment,” says Bailey with a laugh.

After Bailey and Bowen meticulously measured their space, they went to the brand’s online configurator to begin mapping out the new plan. They landed on Vipp’s V1 kitchen: a predefined design that comes with four optional modules that you can pick and choose from as you like. Their final assortment? An island with integrated seating, a tall wall unit that functions as a pantry for dry goods, and a long version that boasts deep drawers and an integrated cooktop. Because Vipp has a partnership with Miele, Bailey was also able to have a double-door refrigerator (one of his top must-haves) crafted with a door panel that matched the rest of the powder-coated black cabinets. The same goes for the Miele oven and Fisher & Paykel dishwasher.

While Bailey was drawn to the fact that all of Vipp’s pieces are raised on legs, making them look a touch more furniture-like, it was an even bigger plus that the couple could adjust the height. “My previous kitchen had a 36-inch counter height, but I’m 6-feet-3. My shoulders would hurt after cutting vegetables for 40 minutes,” recalls Bailey. Vipp was able to adjust the units to 38 inches—a small change that’s made a world of difference. With the planning phase complete, the couple put in their order and patiently waited the five months it would take to have the parts made and shipped.

Not wanting the old space to go to waste, Bailey contacted Renovation Angel, an organization that recycles and repurposes kitchens, fixtures, and furniture. After someone from the nonprofit came to look over his existing kitchen, a third-party evaluator stopped by to provide Bailey with an estimate for a tax deduction. “It was nice knowing these parts would be going to another home, used in a productive way as opposed to destructive,” he shares. When Bailey learned that the Vipp kitchen had arrived in the U.S. and was going through customs, he had the organization carefully deconstruct the space—a process that took all of four hours.

The Super to the Rescue

After Renovation Angel left, Bailey noticed a big problem: The previous developer hadn’t continued the white oak flooring underneath the original island. There was now a massive concrete gap in the middle of the room. Luckily, Bailey’s handy superintendent, Fernando, stepped in to move around electrical outlets and add 16 new planks before the Vipp team came two weeks later. “He gives Superman another name,” says Bailey.

The fresh cabinets and appliances arrived on a Tuesday, and by the end of the workday on Thursday, the crew was gone. All that was left to do was fill the cupboards with all the ceramics Bailey had sourced from Japan, Greece, and Sicily (there’s even a limited-edition Noguchi teacup in the mix), as well as more practical tools, like his sleek Alessi espresso maker and the Top Chef knives his dad bought him on Groupon many years ago. “I will admit, I’ve probably had them from when I moved into my first apartment, and they still work,” he says, laughing. Now everything else is made to stand the test of time, too.