This D.C. Kitchen Was Once Smooshed Under the Stairs—Now It’s Bathed in Light

And Carrara marble, of course. 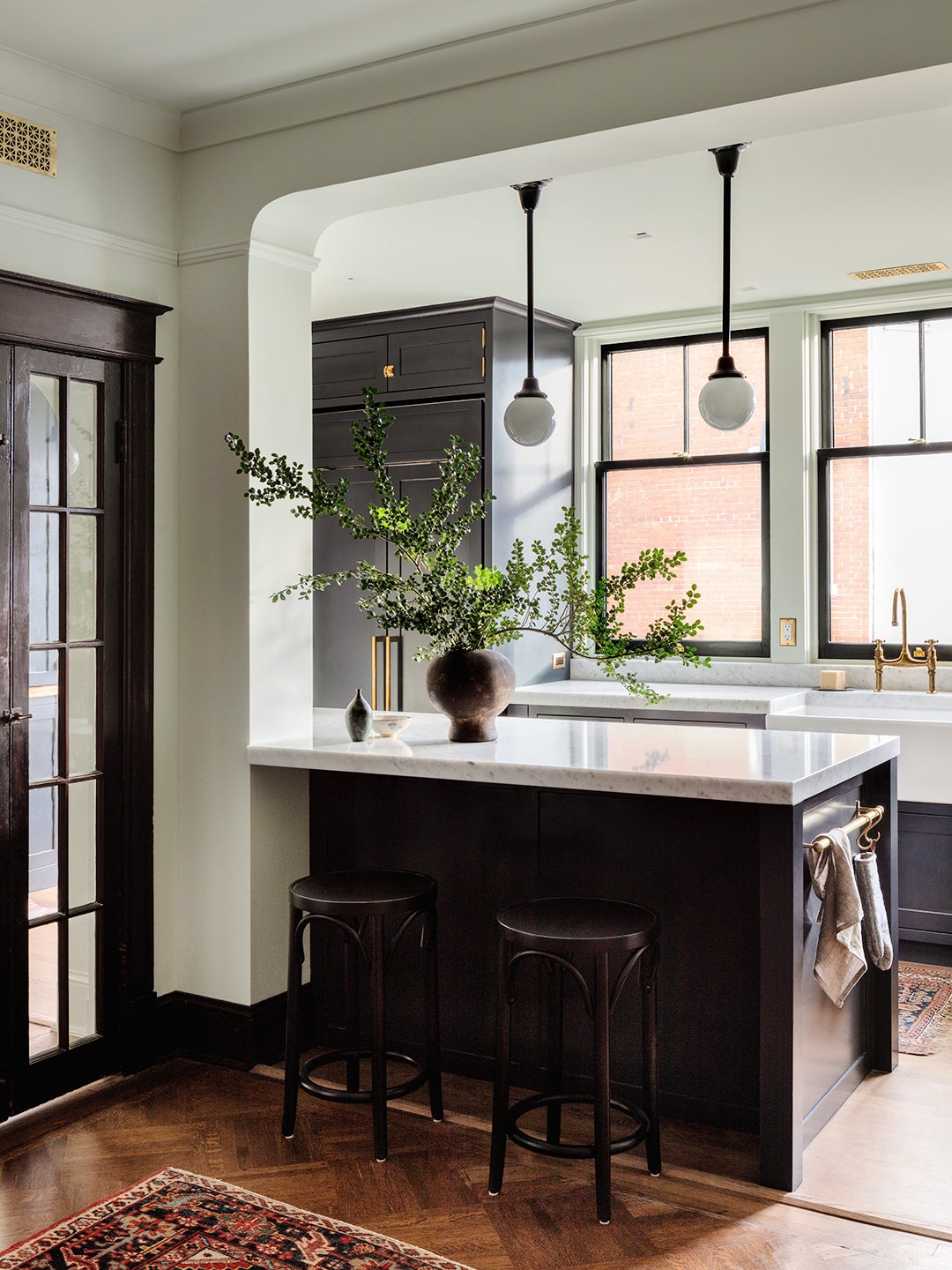 In Washington, D.C., in 1925, a kitchen that consisted of a gas stove, a 4-foot-wide countertop, and a sink was all most people really wanted or needed. In fact, it was such a standard that cooking zones were typically tucked out of the way, underneath the staircase. But fast-forward nearly a century, and, well…you start to see the problem. “Now that we have all these other appliances, we need to expand that very limited footprint,” says interior designer and architect Nicholas Potts. The 1920s Neoclassical row house in the Petworth neighborhood that his latest client had purchased during the pandemic was this classic tiny-kitchen-smooshed-under-the-stairs case.

While the home had been a rental for a while and undergone some flipper-grade renovations, no one had ever thought to switch up the kitchen’s location until Potts stepped on the scene. Looking into the nearby sunporch, he saw an opportunity to shift the entire space, with the help of contractor Impact Construction, maximizing the ceiling height and utilizing the area under the stairs for a new powder room. It was a win-win plan.

The Blast From the Past

Even though Potts was introducing a new blueprint to the home, his client was adamant that the kitchen look as though it had been there for 100 years. The two took inspiration from traditional English kitchen design (the homeowner had lived in London for some time prior to this) and sought to make the cabinetry appear more furniture-like than anything else. That’s the reason you won’t find a swarm of upper cabinets.

“Everything is low,” notes Potts. The peninsula that stems out from the structural wall where a set of French doors used to be is meant to look as though it is a free-floating table. “It was really about thinking of it from the lens of not so much today, but yesterday,” he adds (but with the convenience of a microwave drawer and a wine fridge, which have tactfully been hidden).

The main exception to the low storage plan is the floor-to-ceiling section of pantry cabinets, situated on the side of the house where the previous kitchen was. Potts incorporated a butcher block ledge in the center so his client has a place to store and use countertop appliances (toaster, coffee maker, stand mixer, etc.) behind closed cabinet doors. His go-to trick in any kitchen that’s lacking upper cabinets is to opt for deep, stacked drawers. That way, you can easily load them up with big mixing bowls and other bulky gear.

Look closely at the walls and you’ll notice they’re not as white as they appear. Actually they’re blue. The color, dubbed Pale Powder by Farrow & Ball, covers the kitchen walls, ceiling, and molding, and helps enhance the dimensionality of the rich, almost black millwork, according to the designer.

Potts tasked a custom cabinetmaker with building out the new storage to ensure the cupboards didn’t look like they were churned out of a factory (they’re so precise you don’t see any seams between the frames). Splurging on a bespoke design also meant he could have full control over the dark paint color. The latches were sourced from P.E. Guerin in New York City, which has been handcrafting pieces since the 1850s. The new Carrara marble countertops and backsplash are intended to patina beautifully over time, so drips of olive oil and bits of discoloring from citrus are welcome.

While Potts started thinking big-scale by shifting the whole kitchen into an entirely different room, he also thought of the smallest details, like the brass switch plates, outlet covers, and air-vent panels. “If you’re doing something that’s of a certain period, those little things make a space,” he says.