The Charming Kitchen That Changed Our Mind About This Countertop Style 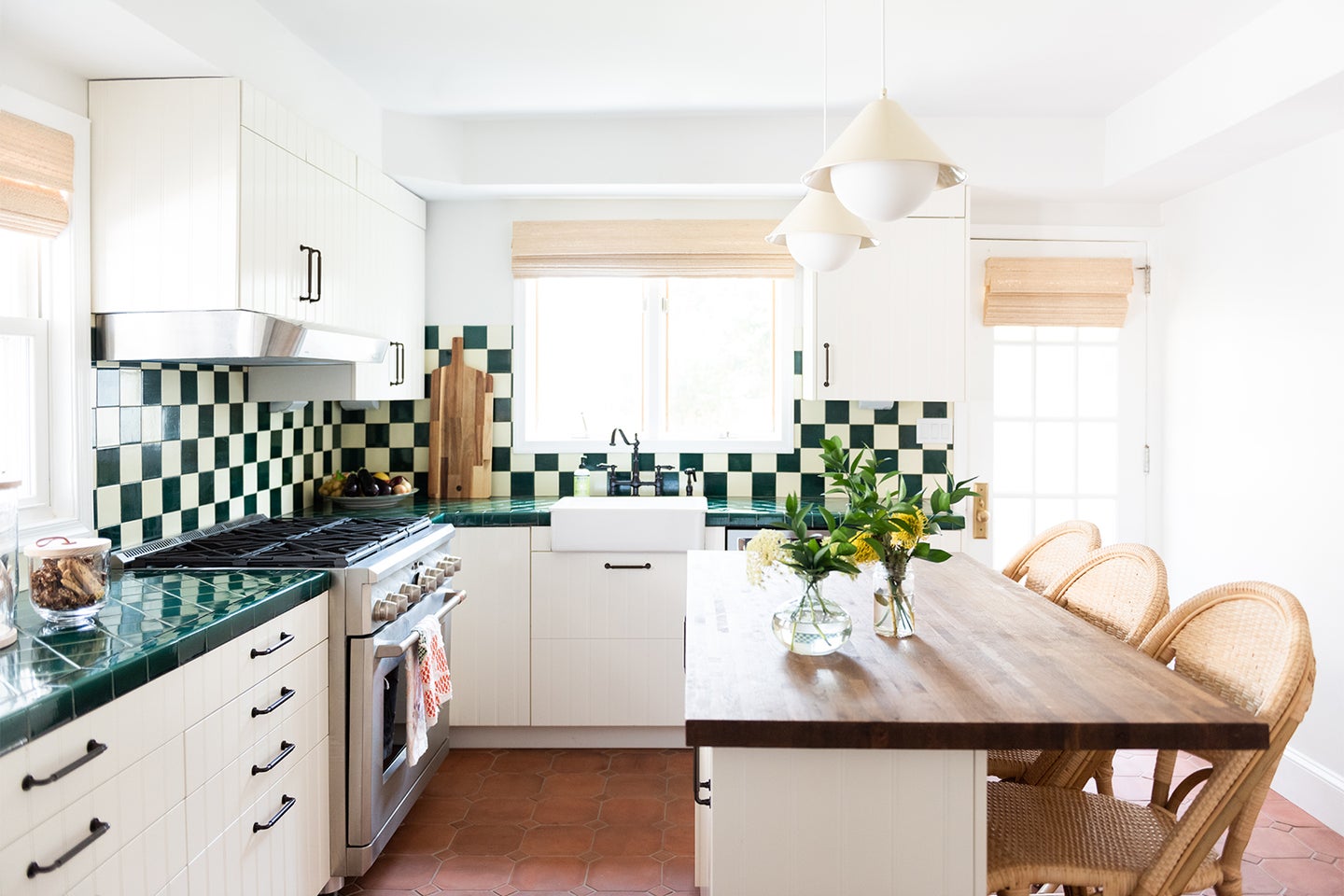 Photography and Design by Nicole Cohen

Not everyone can get behind tiled countertops—they were named the worst kitchen trend of the past 50 years in February. But designer and artist Nicole Cohen is a fan. “They’re a former decorating faux pas,” she says. “But I was in love with the idea of using them because of their retro charm.” (She isn’t the only one: The trend is seeing a major revival as of late.) The opportunity presented itself in the form of peeling faux granite Formica in a client’s Dutch Colonial cottage at the New Jersey shore. The kitchen, which had been renovated in the early aughts, also featured fake wood floors and tiny appliances. In other words, it was begging for a remodel.

“We wanted it to feel cottage-y and quaint,” explains the designer. Inspired by the green and white colorway of a Pierre Frey fabric that covered a bench near the staircase, she went hunting for the perfect ceramic tiles for the countertop and backsplash. With the help of inexpensive materials and high-impact focal points, she reworked the layout’s flow, added tons of storage, and gave this coastal kitchen a serious splash of personality.

She Made Room for the Essentials

The original pantry was in the hallway, so Cohen’s first order of business was to improve the floor plan by adding lots of easier-to-access storage and an island for both chopping and eating. She carved out extra room in an adjacent closet, where she was able to recess the fridge and move the pantry.

She Secretly Saved on Finishes

The old cupboards were swapped for inexpensive IKEA cabinets with cream-colored beadboard fronts, while the original countertops and backsplash were ripped up and replaced with simple $1 ceramic tile. “It’s actually a pretty cost-effective way to add a lot of style to a small, previously uninspired room,” she says of the latter.

She Elevated Inexpensive Tile With an Unconventional Layout

After testing out multiple patterns, Cohen landed on a green-and-white–checkered motif on the wall and a monochrome diagonal design on the prep surface. “If we would have kept them both checkered, it would have been dizzying,” she says. “We were most drawn to the diagonal for the countertops because it had a romantic feel.”

She Prioritized Practicality Above All

Cohen went in a different direction for the island, opting for timeless butcher block to give the family a flat surface they could cut directly on. “This material is great for islands,” she says. “You can sand it down when it shows too much wear and tear.”

She Never Lost Sight of the Theme

Cohen meticulously collects samples of all the finishes she’s considering before choosing the perfect ones. “I pile them together and have them live together on a table for a while,” she says. This is how she chose a handmade terracotta floor tile to finish off her old-world country design. “It’s a great neutral and creates an earthy vibe,” she adds.

With the help of modern off-white pendant lights and beachy rattan stools, this room now has all the charm of a beach cottage—but it functions like a hardworking family hub.

See more kitchen renovations we love: This L.A. Couple Sacrificed Their View for a Larger Kitchen—Or Did They? This Couple Traded a Powder Room for a Kitchen That Fits All the Neighbors A Clever Layout Tweak Doubled the Storage in This 36-Square-Foot Kitchen