Boats Bob in the Background of This Sydney Home, But All Eyes Are on the Quartzite Kitchen Island

Statement stone continues in the bathroom. 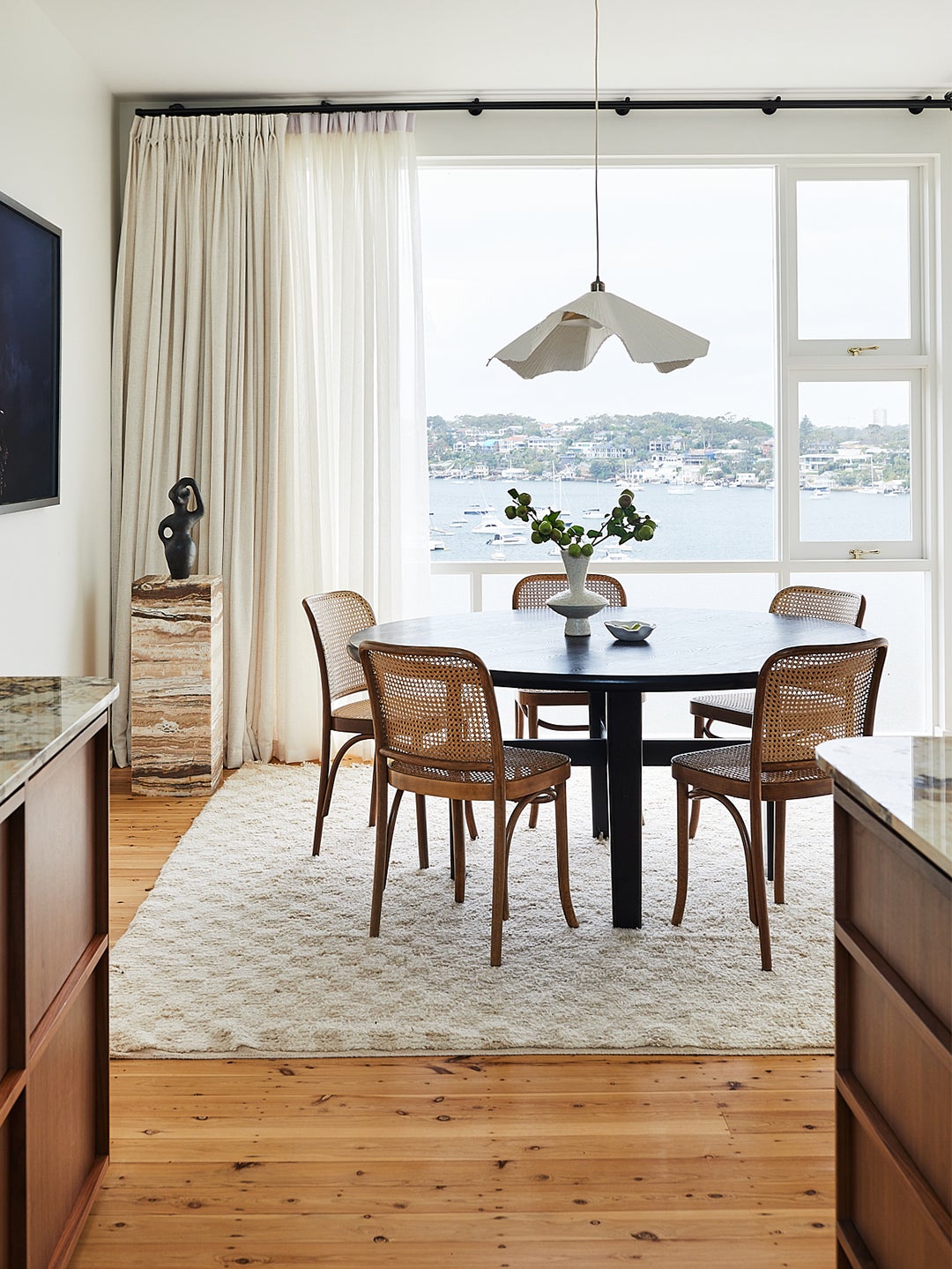 From street level, Kerrie-Ann Jones’s Sydney house looks small (the garage alone appears to take up half of it). But it’s deceptive. The 1950s waterfront home spans two stories and includes two kitchens, two living rooms, four bedrooms, six bathrooms, a home office, a small recording studio, a gym, and a pool. “It’s far more space than we need,” Jones admits, though the former magazine editor–turned–style director made it her mission to have every corner count.

Her line of work certainly prepared her for the feat (she is the founder of online interior styling school The Stylist Lab; she recently launched a YouTube series; and she cohosts a podcast on prominent Australian interior brands, designers, artists, and makers), but so did her many years of renovating. This home is the fourth that Jones has owned—she started young and bought her first apartment at 21 while working two jobs to afford the mortgage and construction. “I wanted it more than anything,” she recalls.

After living in a terrace home in Darlinghurst, in the inner city of Sydney, for some time, Jones and her husband, Andrew, longed for more open space and to live in a coastal location. During their house hunt in 2020, they prioritized north-facing properties, as it’s “the best sun angle here in Sydney,” she points out. It was clear from the get-go that the home’s original owners had style: Original features included cobalt blue tile in the bathroom, silver disco wallpaper in the dining area, and pastel yellow kitchen cupboards.

The problem was, apart from the flooring upstairs, most of those details were rotted, broken, or rusted. Jones was mindful of replicating some of the elements, like the spiral steel staircase outside that boasts an old-school perforated pattern but is up to today’s code standards. She even opted for pricier wood windows over modern aluminum ones. “While it was far more expensive and labor intensive, it was one of the only ways we could honor the home’s original heritage,” she shares.

With some help and guidance from her father, who is a bricklayer and sandstone mason, Jones set out to make the house work for her family of four by adding an extension to the garage and the kids’ wing at the front of the house, replacing the roof, downsizing the pool, and combining two bedrooms into one main suite. She conveniently relegated the living space, bedrooms, and laundry to the upper level so nobody has to trek up and down the steps with their dirty clothes.

Then there were some decisions that took a little longer for Jones to make, like finding the right stone to use in the kitchen. Eventually, she landed on a Brazilian quartzite with sparkly flecks and swirling veins that isn’t just mesmerizing to look at while she’s cooking but is “surprisingly easy to clean, and it doesn’t stain,” she notes.

With the island being the kitchen’s hero piece, Jones didn’t want to overcomplicate things elsewhere, which is part of the reason she opted for a streamlined, plaster-coated vent hood. Rounding out the sides of the island and the fireplace in the adjacent living area created a cohesive look and also relieved a little stress. “I designed them with my kids in mind,” she says. “I was worried they’d bump their heads on the corners.”

The open shelving was all for her: “I’m very short! I can’t reach overhead cupboards easily,” she says. Plus, as a stylist, having a spot to display treasured objects and cookbooks fuels her creativity on her off-hours. Even the tall plinth in the nearby dining area, crafted from leftover travertine onyx from the fireplace addition, is an ever-evolving arrangement of small sculptures and fresh florals.

Obsessed with the look of palladiana patterned terrazzo, Jones decided to replicate the look on a much more impressive scale in the bathroom with large format offcuts of marble (some are scraps from the fireplace; others were sourced from suppliers on Facebook Marketplace and Gumtree). Jones’s dad smashed them up, and the subcontractor set them in place. The other bathrooms feature a mosaic tile version of the same arrangement, which was much easier to install. In the primary bedroom, she struck a warmer note by lining the wall in walnut wood cupboards with grasscloth wallpaper inserts and brass handles.

On any given day when the sun is shining in Sydney, Jones and her two kids will head down to the beach or take a dip in the pool, later ending the evening on the terrace. “I have always been drawn to living by the water. My first two apartments were in coastal suburbs and I loved it,” she shares. “It’s very peaceful just sitting on the balcony watching the boats bobbing on the bay.” The view is so good it even turns her head away from the kitchen island.