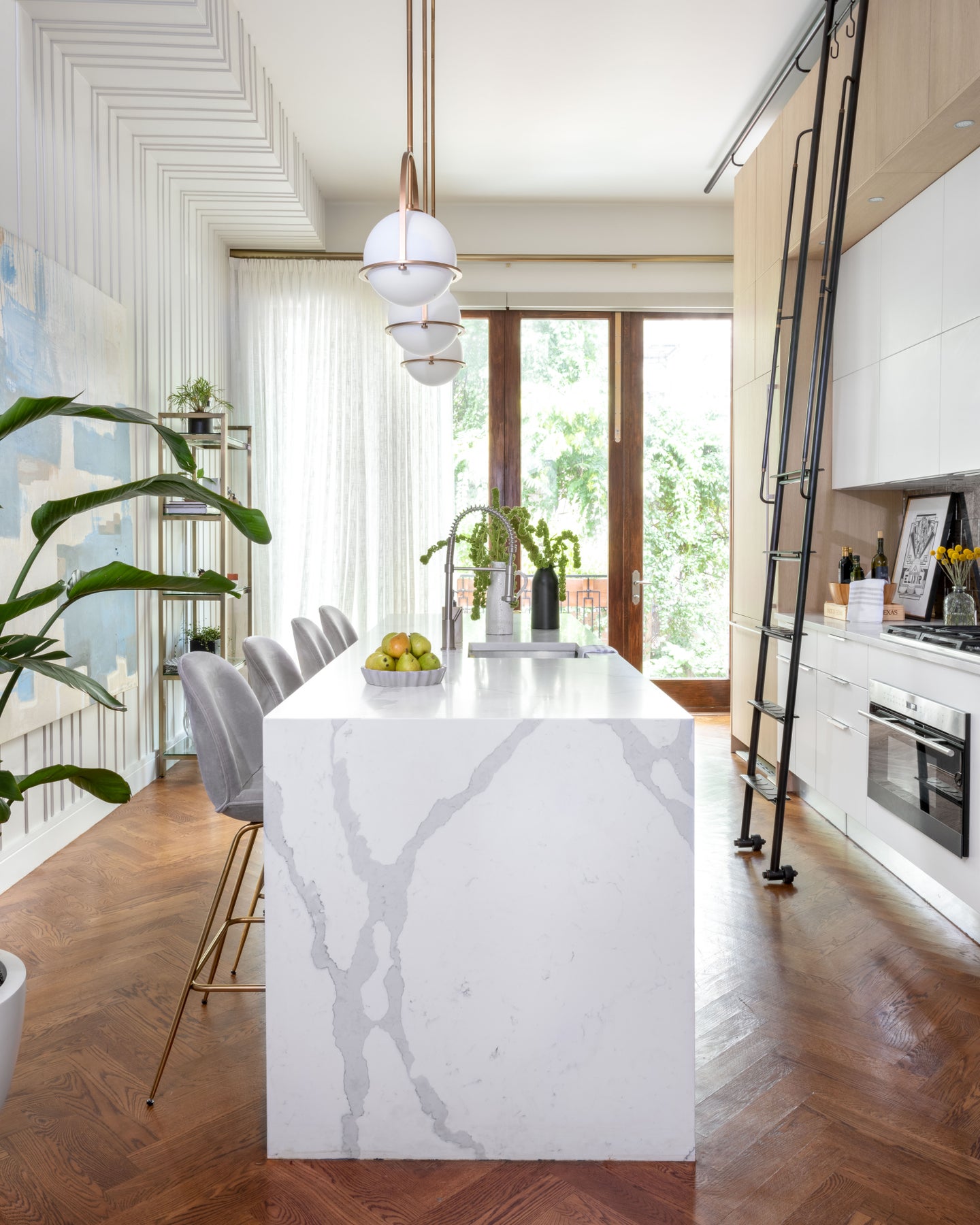 Even the best-laid plans go awry, but sometimes, it’s a blessing in disguise.

When interior designer Silka Weiss’s former client and his fiancé announced that they were moving back to NYC from Houston and had just bought a newly built brownstone in Crown Heights, Brooklyn, she knew that the project would be a time crunch. She only had a finite amount of time to overhaul their home before they moved in: The construction was to begin in the summer of 2017, and they would move in November that same year.

Fast-forward to a contractor quitting right before the start of construction and Hurricane Harvey hitting Texas—forcing the couple out of their Houston home early—and the project was put on a fast track to completion. The blessing, in this case, came in the form of a new contractor who managed to finish the project in only a month and promptly move the couple into their new home.

The newly built home was already modernized—boasting herringbone floors, Italian marble in the kitchen, and classic wood windows—but it lacked the much-needed charm of older townhomes in the neighborhood. Weiss added a modern molding pattern to one of the walls on the first floor to give it character and texture. “I came up with the molding concept to add texture,” she explains of the custom wall which runs the entire first floor.

The custom black marble fireplace was another addition, as was the built-in window seat, which gave the space less of a cookie-cutter look. With a restricted amount of space on the ground floor, Weiss wanted to maximize the cohesive and airy look and feel of the space, adding a textured wallpaper on one wall and replacing the heavy wood staircase railing for a lighter black metal one. The designer even added a doggy room for the couple’s two pups.

The kitchen already featured floor-to-ceiling storage (and 14-foot ceilings) but it was difficult to access the higher cupboards, so the designer added a custom rolling ladder worthy of a modern version of Beauty and the Beast. Arguably, this is the feature that gives the home its custom, bespoke feel and makes the whole space that much more functional.

In fact, the whole kitchen was designed in a way that felt more comfortable and practical than clinical. “We treated the kitchen like another living space,” says Weiss, “adding custom drapes and an amazing art piece we commissioned from [artist] William McLure.” The design on the entire ground floor was intended to feel cohesive, light, and airy.

advertisement
“As we go higher up in the house, the rooms get more specific in color.”

Custom touches were carried through the upper floors, with custom built-ins in the family room and ceiling beams in the guest room. And while the lower floors were designed to feel open and airy, the darker colors and dramatic vibes set in on the higher floors. “As we go higher up in the house, the rooms get more specific in color,” says Weiss.

The first major moment is quite subtle and comes in the form of a deep blue headboard in the guest room. As the floors get higher, the rooms get increasingly moodier: a black-and-teal home office and a textured and warm gray master bedroom: “Our inspiration for the office was a cigar lounge, and the master bedroom was to feel like a hotel,” adds the designer.

The crown jewel of this Crown Heights brownstone: a moody and dramatic home gym with black ceilings and reclaimed beams that open up onto a colorful rooftop terrace. “The penthouse gym had to be black and sexy, with reclaimed beams,” says Weiss, of the top floor, which boasts two balconies. What the home once lacked in character, it now more than makes up for in beautiful bespoke details and bold color choices.

Discover more homes we love: The Founder of Aelfie Invites Us Inside Her Color-Saturated Long Island Home This 700-Square-Foot Apartment Is Home to Over 70 Plants Exclusive: Inside Garance Doré’s LA Home Where Terra-Cotta Hues Steal the Show