This Family Completely Reimagined What a Kitchen Island Looks Like 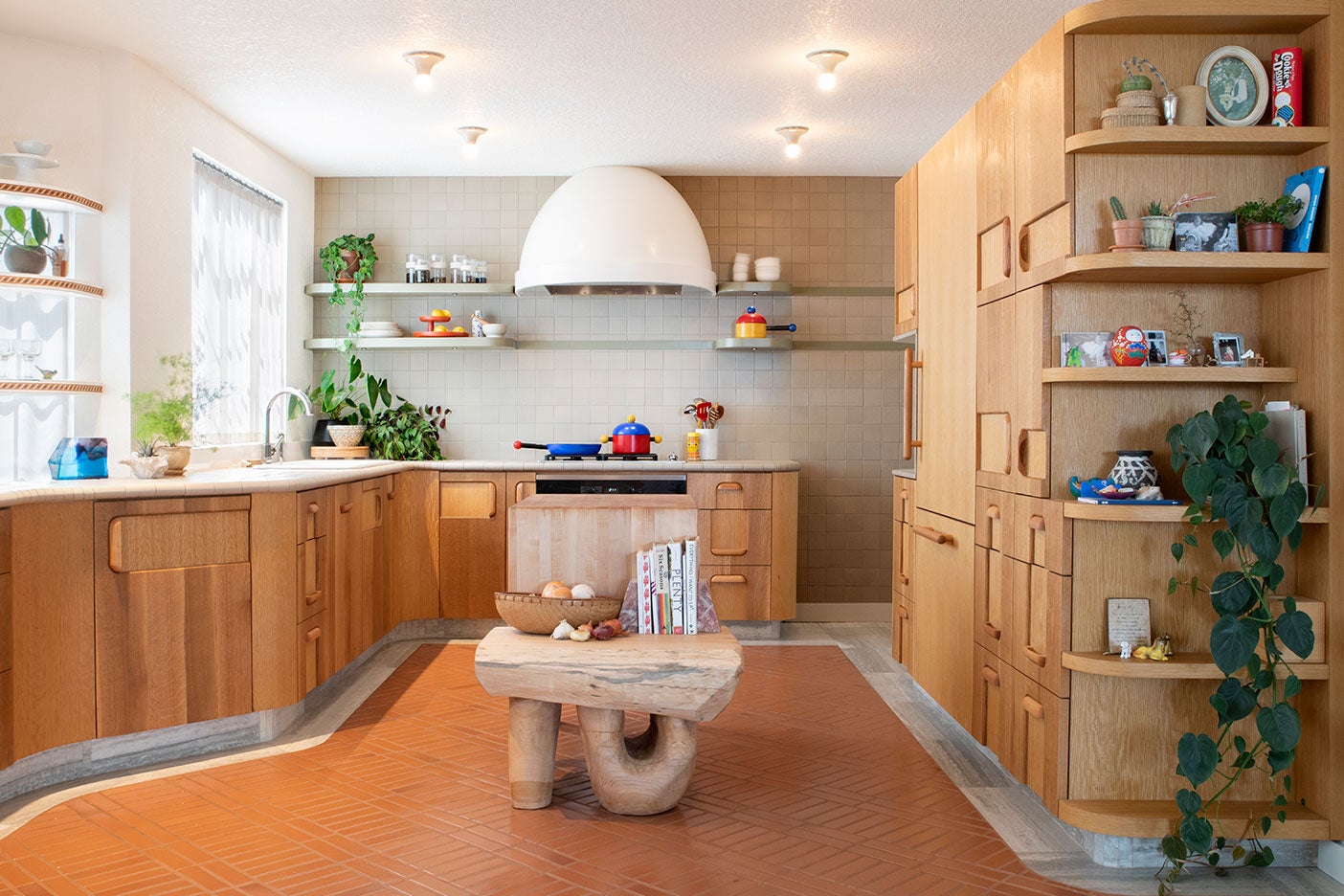 “Are you sure this is the finish you want?” the plumbing supplier asked. He was calling back Charlie, a musician and graphic designer to confirm she had really picked a beige-brick bathroom faucet intentionally. He may have had doubts, but she wasn’t afraid to take risks. In fact, she welcomed them.

Charlie and her husband, Todd, a recruiter, were sold by the charming location and sweeping views of their 1930s Tudor house in Portland, Oregon, when they moved in with their daughter, India, in 2017. But after a year of living in the home, they’d had enough of the previous owners’ hodgepodge renovations (one of the two bathrooms was so outdated—shiny brass fixtures, cracked floral tiles, way too many recessed lights—that the family avoided using it altogether).

That’s when Andee Hess of the local firm Osmose Design swooped in. To kick things off, the couple sent her loads of inspiration: carved cave interiors, Italian modernist furniture, and lots of punchy mosaic tile. There was just one common thread in all the imagery—nothing was generic or expected. Hess knew she had to think out of the box.

In a matter of weeks, the white Shaker cabinets and butcher block counters were gone. In their place, a “hobbit fantasy” (Charlie’s words) came to life. Taking cues from the American Studio Craft movement of the ’20s and ’30s, which rejected mass production, Hess imagined Tetris-like white oak cupboards with grooves and bumps in lieu of hardware. “I love opening them with my feet,” says Charlie. “They hit at just the right height to reach a toe under.”

Hess originally suggested stone counters, but Charlie pushed the envelope: “She loved the charm of tile edges and tops,” says the designer. It took a brave general contractor to tackle the number of tricky cuts the ceramic pieces needed to hug each curve of the wavy surface, but the result was worth the extra effort.

The countertops weren’t the only complex installation. After ripping up the faux wood floors, Hess laid out glazed tiles in diagonal stripes with thick grout lines for an effect that mimics exterior pavers. Like a prized work of art, a silver travertine border and toe-kick frame the design (and highlight the cabinets’ serpentine shape).

Even the wall behind the stove got its own unique treatment: a floor-to-ceiling cream ceramic tile backsplash with floating shelves painted to match, a trick for making the low ceilings feel taller. (Hess also ran shelving over the undulating windows, which she lined with inlaid strips in four different types of wood.) Local artist Scott Foster, meanwhile, was tasked with creating the sculpted plaster vent hood.

advertisement
“I love opening the cabinets with my feet. They hit at just the right height to reach a toe under.”

But none of those details steal the show quite like the double-tiered kitchen island. Its higher section, a sturdy Boos butcher block, is paired with a chunky low table sculpture by Vince Skelly. “Once it was set up, our daughter climbed right up and claimed it as her own,” says Charlie. “She loves to watch, read, and eat from that spot and fits perfectly there.”

The upstairs bathroom is where the controversial terracotta-hued faucet ended up, chosen to match an ochre tone in the mosaic floor. “The manufacturer allows you to pick each color of stone used, so it was a super-fun process,” says Hess, who toned down the busy pattern with warm gray glazed wall tile.

In the living room, Foster was called in once more to plaster the fireplace surround in a complex concave curve lined with brown zellige tile (another installation nightmare now worth its weight in gold). “They have a sharp, crisp-cut edge to them,” says Hess.

Right off the open-plan family room, a forgotten nook framed with a pointed archway has been reimagined as a dining area, topped by a tiered ceiling lined with more wood inlay. Underneath, a plush floating bench wraps around a green onyx table. “Now it’s another place for us to gather and entertain,” says Charlie, “or just sit, read, and look out.”