Now there are hand-tufted headboards and cool color schemes. 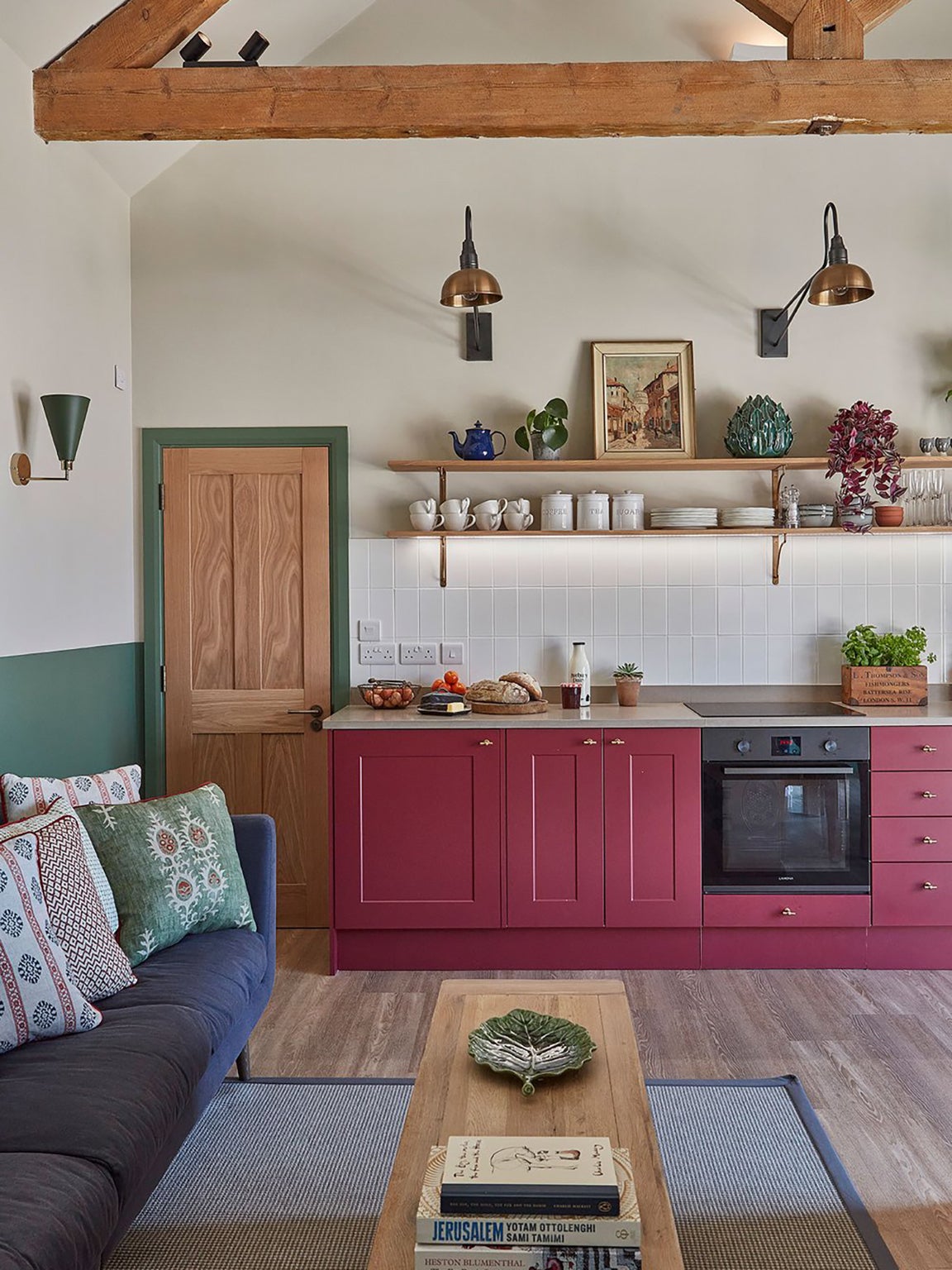 Tending to a 2,500-acre farm—let alone one located in Long Barrow, a UNESCO World Heritage site—was never on the list of dream jobs for Alice Hue. But while studying geography at Nottingham University in the 2000s, fate proved to have other plans. It’s where she met her husband and fellow hockey player, Rob, who, once the two became serious, had a long-term proposition to make. “It was a Sunday morning,” Alice recalls of the moment he sat her down. “We had that first conversation about, if this works out, can you imagine yourself living in Wiltshire?”

Rob is a fourth-generation farmer whose family has been harvesting grains (wheat, barley, oilseed rape, and beans) at the 100-plus-year-old Galteemore Farm since the early 20th century. And in 2018, Rob and Alice moved into the same circa-1710 house that he had grown up in to take over the family business, now also called the Farm at Avebury.

“It’s thought to be some of the oldest farmed land in Europe,” shares Alice, adding that despite all that time, the crops have largely stayed the same. “We used to have dairy in the ’70s and would have had a lot more livestock in the past,” she points out, but the past two decades have been all about arable plants. Except, that is, until 2022—the first year that the location has also served as an event space and travel destination, particularly as a place to stay en route to nearby famous Stonehenge on Salisbury Plain.

The project—transforming aging, unused horse stables—was an idea that the couple had been dreaming about with friend and designer Polly Ashman for a while. But the push that made it a reality? A little thing called Brexit.

“The farming industry has changed a lot; we’re transitioning from what was quite a heavily subsidized industry to where the subsidies are now being withdrawn,” Alice explains. And Brexit accelerated that. While the farm is still the family’s major source of income today, diversification has became that much more important to the couple when thinking about one of their three daughters—Evie (6), Georgie (4), and Rosanna (2)—inheriting the land.

After successfully renting out the Annex (formerly an old toolshed) on Airbnb, the Hues had the confidence they needed to start a new business. But when they moved forward on renovating the stable stalls into boutique hotel rooms, the Environment Agency put a halt to their plans.

“They’re consulted on every single project to make sure that you’re not building in a floodplain, and they had just totally misrepresented the route of the river near us,” shares Alice. “And so they said, ‘Oh, you can’t possibly do this conversion because you’re going to be in a floodplain,’ even though it was so clearly in the wrong place.” In the end, the couple had to hire a fluvial engineer to remap the area to prove that the river was, actually, 50 meters away from the renovation taking place.

The whole misunderstanding—”to-ing and fro-ing” as Alice puts it—set them back 15 months before even breaking ground. Luckily, a misplaced river was their only setback. With the help of architect Kris Eley, who led the charge on converting the 12 stables into six colorful vacation rentals, the entire timeline ended up taking just eight months.

From the exterior, the building looks the same as it has for decades (“We have never managed to get a date, but [the stables] are older than Great-Granny (Rob’s grandmother), who is 95,” Alice offers.) It’s only once you step inside that the idea of Arab race horses being boarded there feels comical. Eley was a critical part of the process, especially when it came to fitting furniture into the smaller rooms. Even the largest three-bedroom is only 600 square feet, and the smallest, a two-bedroom, is half that. “He was able to blend the existing historical fabric with contemporary spaces and finishes (and charm the planners!),” shares Alice.

And Ashman was instrumental in pulling together the right color palette and decor scheme, giving the interiors a homey touch inspired by the surrounding environment. “It’s a postcard-perfect place,” describes Ashman of the farm. “Rolling hills, plowed fields, animals, the sky. That’s why you see a lot of green, red, and blue.”

It makes sense, considering guests are staying smack-dab in the middle of the farm. “On one corner sits the farmhouse, and then the stables surround the courtyard,” Alice explains. That proximity is part of the experience. “It’s lovely being able to show visiting children the tractors, sheep, and pigs,” she adds.

It’s also why Ashman and Alice stuck to affordable, low-maintenance materials and furnishings, though you’d never be able to tell from the photos alone.

“Textures were really important to us,” says Ashman. “That’s why we chose Christopher Farr Cloth, Sanderson, and Linwood. And then the furniture was bits and bobs from normal retailers.” She and Alice also scoured eBay and Etsy for one-of-a-kind finds, including a secondhand chest for $120. “We didn’t go too crazy on the cost. We stuck to very nice, normal, midrange stuff. We wanted it to look like someone’s home,” adds Ashman.

And it does, whether that’s by exposing original brickwork and stone; adding hand-tufted, bespoke headboards; or employing a brave use of paint combinations and classic English cottage patterns. But Ashman points out that the cozy, comforting feel they were after should be attributed to the light choices more so than the furniture.

“We had to work with angles on the roof; we added a lot of lighting on the wood beams, using spotlights to point in specific directions and light up things like artwork, a mirror, and the kitchen area,” she adds. “We layered fabrics and colors, but you have to layer lighting as well.”

With the stables now up and running as “holiday homes,” the Hues have since opened two event spaces (the Barn and the Granary), where yoga classes and pop-up restaurants have been hosted. The latter is something Rob, who is already scheming about curing and cooking workshops, is particularly interested in building. “Rob never stops thinking,” Alice says, laughing. “It’s one of those things where we might go swimming together, and I come out and can’t even remember how many lengths I’ve swam. He comes out having planned all his meals for the day.”

It’s those very ideas that will continue to grow the farm’s opportunities and offerings, and to provide stability for the Hues. “There are good years and bad years, in both farming and hospitality,” Alice notes, who now knows she’ll never leave Wiltshire. “I can’t imagine myself anywhere else.”