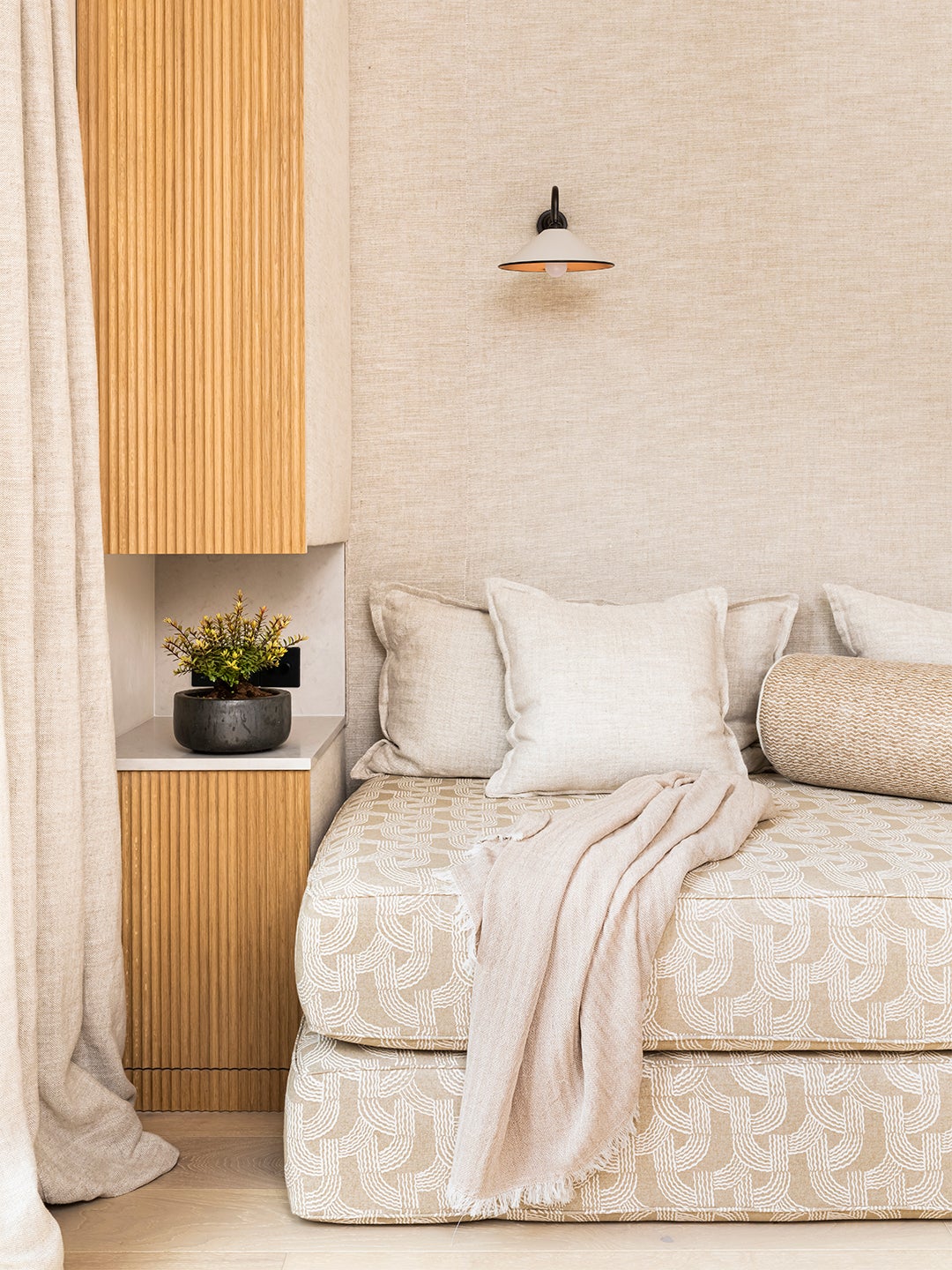 Building a new house is like dating—there’s plenty of rejection involved. Except instead of a potential partner shooting you down, it’s an entire department of people. Jenna Choate, the U.K.-based designer and cofounder of the firm Interior Fox, felt the disappointment when she was told by her local council in London that she couldn’t add a mezzanine to her backyard guesthouse (neighbors feared it would be disruptive to their privacy). The structure would have to be a single story. But like with any heartbreak, something productive came out of this one: an incredibly clever guest bed.

Before her initial design plans were vetoed, Choate had intended to put the bed on the home’s upper level. When she returned to the drawing board, she had her first aha moment: How about a Murphy bed instead? “But that doesn’t exist in the U.K.,” Choate, an American transplant who has lived in England for almost a decade, says of her quick realization. The thought of a sleeper sofa crossed her mind next. Yet even while there are some chic options out there, the designer felt strongly that their comfort level was not up to par. “Plus I couldn’t find anything that was the right size,” she notes.

All of this brainstorming led her to a brilliant yet oh-so-simple idea: Stack two mattresses on top of each other so it can function as a sofa during the day and a super-king bed at night. Okay, so it turned out to be a lot more involved than just piling one cushion on another, but that is the general gist. Choate tasked a company that specializes in making bespoke mattresses for boats and RVs to create versions to her exact 78-by-87-inch specifications. “They needed to be bouncy but superfirm,” notes Choate. They also had to have small tabs on the sides so guests could easily reposition them.

The mattresses are swathed in a sandy-toned fabric from Fermoie that the designer chose for its Japandi-inspired look. “It felt very hotel-like, and it’s a good base for when I want to transition decorations in and out of the space,” she shares. Behind the adjacent oak veneer cabinets, guests will find everything they need to make up the bed: a duvet, sheets, and pillowcases.

What’s even more thoughtful is that the entire area surrounding the bed is just as comfortable as the mattresses (Choate had the wall and sides of the cupboards swathed in batting and fabric). “You could knock your head into it,” she says. “It’s a safe little space.” Then there are the small but mighty details, like the USB ports and the dimmable light switches on both nightstands. Choate loves her creative solution so much that last holiday season she and her husband opted to sleep in the guesthouse and gave up their bedroom to family. Sometimes not getting your permits okayed can be a beautiful thing.