How to Blend Your Style With Your S.O.’s—And Actually Make It Work

Lessons from a cool NYC apartment. 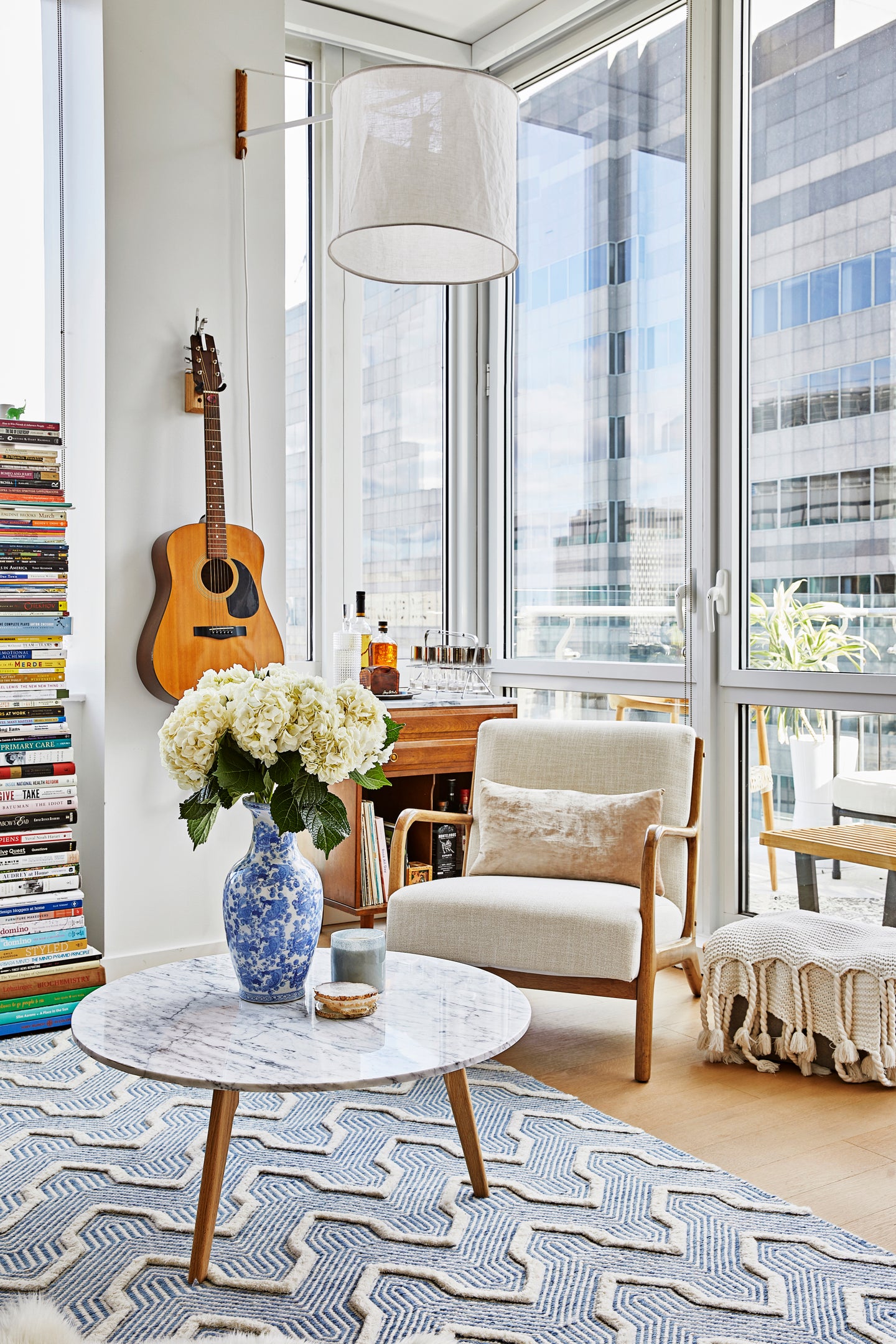 It can be tricky enough to move into a new place with your significant other, but when your partner has a vastly different personal style than your own, it can be supremely challenging.

Designer Megan Hopp (whose work you may recognize from this beautiful Williamsburg rental) is proof that it can be done. Moving to New York’s high rise–ridden Financial District from a charming brownstone in Carroll Gardens, Brooklyn, felt like a challenge on its own, but given certain perks, like panoramic views of the water and in-unit laundry (if you don’t live in a city, you’ll never understand why this is a luxury), the 750-square-foot apartment she now shares with her boyfriend is a place she’s more than happy to call home.

Initially drawn to the natural light and view, Hopp jumped into the project right away, starting with the bedroom. Almost immediately, she was confronted with strict boundaries. “As much as I’m all about layering styles, the apartment is so modern and minimalist that there was a line I couldn’t cross in terms of how vintage or kitschy I could get,” explains Hopp. 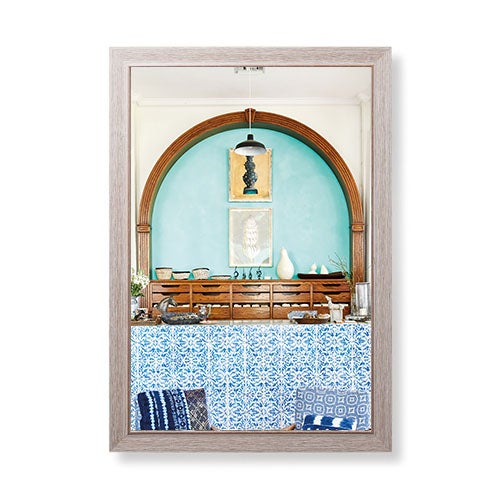 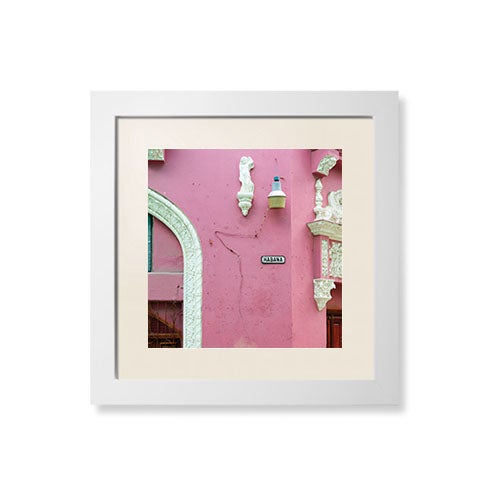 What followed was a lesson in compromise. Hopp, whose personal style is somewhere between Scandinavian and Palm Springs mid-century (“I know they’re polar opposites, but the middle of that Venn diagram, that’s where I live”), worked to blend that with her boyfriend’s more traditional mid-century style (“He would be happy to live on the set of Mad Men”). The apartment is an ode to mid-century with a few bohemian, eclectic accents. It’s all about balance.

Take, for example, the bed: It’s upholstered with an abstract print that suits Hopp’s style but features a sleek, square silhouette that is more aesthetically pleasing to her boyfriend. The overarching blue color palette is a happy medium between the bright colors he loves and the more neutral, feminine tones she loves. And both of them brought in a couple of no-veto pieces (for Hopp, a dresser; for her boyfriend, a sofa) but started new with everything else so they were equally involved in the decision-making.

A mix of big-box retailer finds from places like Article, Blu Dot, and even Target and unique pieces (Hopp is a big flea market fan and an avid thrifter), the apartment strikes a balance in another way by blending old and new in addition to personal styles. Little touches, like a bone-inlaid table and large-scale artwork from India, round out the space.

“I didn’t want to do just a bunch of glass and chrome and acrylic furniture,” says Hopp of dealing with her new home’s more contemporary vibe. “I wanted to use comfier, richer, more substantial pieces that were more my style without defeating the purpose of the clear view.”

It turns out that there are perks to a more modern space anyway: The floor-to-ceiling windows allow for a steady stream of light and make something like matte black walls feel doable. “I’ve been wanting a black bedroom for a very long time but have not had a space where that would be remotely appropriate,” says Hopp of a bucket-list design feature.

Read on for Hopp’s tips on decorating an apartment with your S.O., adding personality to a rental, and dealing with a smaller space.

On Blending Your Style With That of Your Partner’s:

Make a three-tiered list: Write down the nonnegotiables (the items you don’t want in your home), the things that aren’t your favorite but wouldn’t be hugely objectionable to see on a daily basis, and things that you really love. Set some hard rules.

Present options: For some reason, one of the hardest things for us to settle on was an area rug in the bedroom. I mocked up six little mood boards where he could see the bed on top of six area rugs that I would be okay with; it was helpful to visualize that.

On Adding Personality to a Rental:

Temporary wallpaper is always my number-one tip for everyone. In this place, I took simple lacquered photo ledges and wallpapered three-quarters up the wall to create a faux chair-rail trim without actually putting up any fake molding. It was a way to create a more permanent look with something that’s super-temporary.

In general, thinking about your walls and your ceilings is really important in a rental. People will furnish [their homes], but even if their furnishings are really nice, that’s only half of it. I try to do as much with wall mounting as I possibly can: bedside sconces instead of table lamps, a floating vanity console instead of something more traditional. I also added bamboo Roman shades in the bedroom to make it feel more custom. 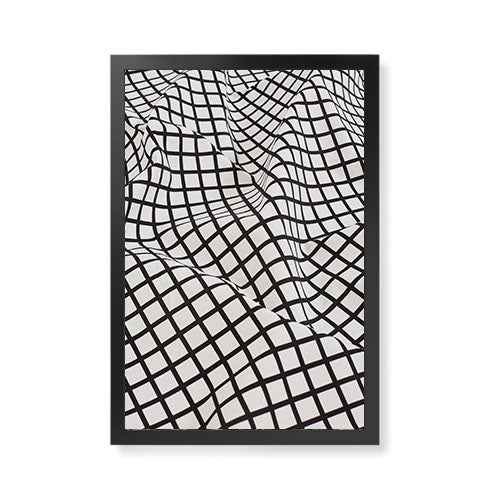 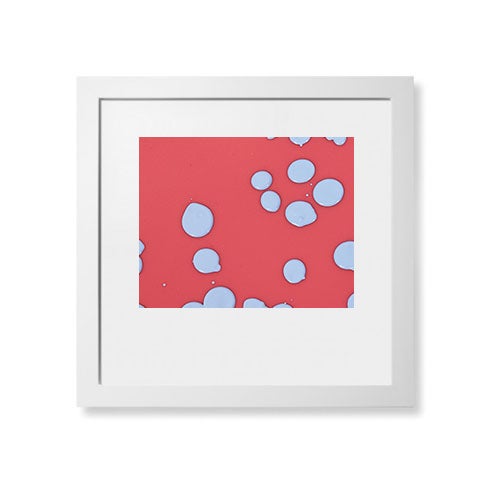 On Making a Small Space Feel Bigger and Livable:

Figure out what furniture you use and need versus what your brain tells you that you need to have. For example, something that we went back and forth on was a dining table—we could have fit a two-seater bistro table, but at the end of the day we’re not really going to use it.

Be mindful of ways to incorporate storage in all types of pieces. One of our side tables is a cabinet. It doesn’t mean that everything you get needs to be a big block of drawers, but just be aware of that.

Finally, the rule book needs to be thrown out in regard to what gets stored where. If you look at the cabinet above my microwave where one might assume I’m keeping a Crock-Pot, you’re going to find vintage tchotchkes and books. There’s definitely organization [everywhere], even though it doesn’t look the way you maybe imagined it.

See more homes we love: This Is the Chicest Bachelor Pad in L.A., Hands Down This South of France Home Reminds Us Why We Love French Style This Interior Designer Goes All Out for the Holidays—Take a Look Inside His Home