Maggie Wilson of Shelter Co. takes us inside her chic California rental—and her temporary outdoor tent. 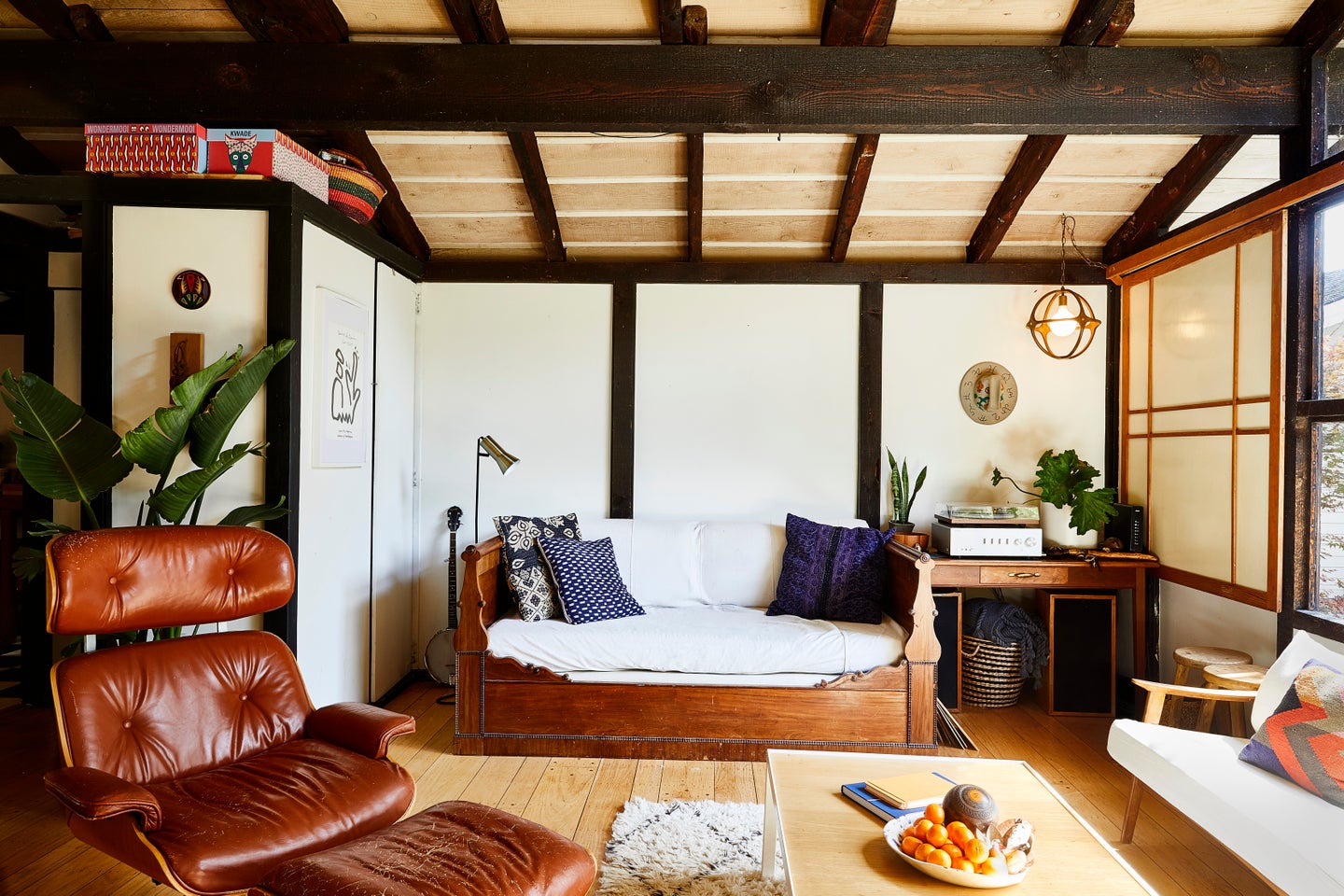 Maggie Wilson doesn’t like to put limitations on herself—or her home. Instead, the creative director at Shelter Co., an event planning and production company known for their luxury tents, views her tiny California cottage as an open invitation. “We tend to host less formal parties, and more, let’s call it, ‘office hours,’” suggests the San Francisco native. On any given day, Wilson and her husband, Tim, who runs advocacy campaigns for Consumer Reports Magazine (“I always joke that he saves the world and I throw parties”) will host a revolving door of friends and acquaintances at their cozy and quiet rental in Kensington, CA.

Like most former city dwellers, after years of dealing with noisy streets and small apartments, the couple was ready for a change of scenery—specifically one with less pavement and more wildlife. While the pair was initially set on the idea of moving to the countryside, Wilson and her husband decided to give the Bay Area one last chance when she stumbled upon a nearby listing with their dream outdoor space.

“I saw this weird little inlaw cottage in the area of the east bay that I had never even heard of and I was like, ‘I have to go today and meet the owners,’” recalls Wilson. Situated just north of Berkeley above the hills of El Cerrito, the sweet dwelling was even more magical in person. Along with their cottage, the acre plot also encompasses a three-bedroom house (home to their landlords), as well as another one bedroom apartment.

“They raise chickens, bees, and have a ton of elevated garden beds. The landlady has converted her garage into a painting studio where she teaches classes. But we like to say that it’s a compound, not a commune,” laughs Wilson.

Perhaps even more intriguing than their co-living lifestyle is the duo’s current sleeping situation. With the aim of reorganizing and adding storage to the cottage bedroom, Wilson and her husband spent the summer snuggled in a Shelter Co. tent. Surrounded by uninterrupted wilderness and breezy California bliss, her serene set up is as peaceful as you’d imagine.

Read on for everything Wilson had to share with us about getting back to nature—and bringing your style with you.

What led you to the decision to sleep out in the tent?

“It was really two fold. When we moved, we had to get rid of at least half of our stuff to be able to fit into the cottage (which was actually a very cathartic experience). But even after we did a huge purge we were still full in the house. Part of this is so that we can do work on our bedroom and find new storage solutions. It’s been a slow going process. And, since I work for a company that supplies outdoor temporary lodging, all of us on the compound thought that it would be cool to have a tent to use as a shared guesthouse. For the summer, we’re staying in it, but as soon as we have our bedroom set up it will become a guest house for the property.”

I know that you also rely on an outdoor shower. What’s it like to function and sleep in the outdoors on a regular basis?

“It’s honestly the best. When we set it up we were doing it as a logistical move, but it’s so pleasant. During the night you hear owls and you wake up to birds chirping. All of our tents have two layers of doors—one is a screen door and one’s a solid canvas door. We usually sleep with just the screen closed. You look out and you’re looking out onto trees and not just a wall. The outdoor shower and bathroom is adorable. I personally think there’s nothing better than an outdoor shower and really hot water with breeze on your face.”

Let’s get back to this “compound” living situation. What’s it like sharing this land with so many other people?

“I don’t know if we would have necessarily pictured ourselves in a shared property situation but when we came here and met the owners, Will and Kate, we had a ton in common. They’re super laid back and chill. It allows us to have a huge property, but there’s a nice balance to it. We don’t’ spend a ton of time together—there’s definitely plenty of privacy—but there are also people around to help out with things or have drinks on big occasions. It’s the best of all worlds.”

How were you able to decide what to get rid of during your initial purge?

“It was kind of more how we decided what to keep. We lived in our last place for three years and it’s insane to me how much we’ve accumulated. As we were moving out, we were like, ‘We don’t need most of this.’ It wasn’t super emotional or difficult to figure out what to trash and what to keep. There was only so much room so everything else had to go. There are furniture pieces of ours that have been on both sides of our families for a really long time—those things were a no brainer. That helped us narrow things down from a furniture level.”

How would you describe your style?

“I think that Tim and I both are super into old stuff and vintage and antiques and collecting. We’re constantly battling with this secret desire to be minimalists, even though it doesn’t come naturally to us at all! There’s a lot of cool old pieces that came to us from family or the flea market, but we’re always trying to edit it down as well as add some modern things to keep it simple. With the cottage, the entire communal space is one room. If you have too many things going on it tends to look cluttered in crazy. That said, I have a ceramic hoarding problem, so all of our dishes and vases I’ve gotten while traveling. Tim also has a huge hat collection, so I like to have those on display. So, while we’re big collectors, we try to keep it paired down and organized.”

What are some of your favorite pieces that you’ve collected over time?

“In the living room, we have a daybed that was my grandmothers that’s very sentimental to me. It gets sun right in the middle of the afternoon—it’s the best place to curl up in the house. Right next to it, where we have our record player, Tim’s grandfather built that table by hand. Nostalgically, those two pieces are the most important to us. There’s also a $300 couch frame we scoured at the flea market, fixed up, and made cushions for. We also have a lot of Shelter Co. pieces mixed in—like the coffee table inside and outside of our house, which I helped design.”

Your kitchen is adorable. Is it easy to function in?

“I’m very used to having small kitchens since I’ve always lived in cities. I think it’s funny that most people who visit comment that it’s so tiny, but, really, there’s plenty of counter space and plenty of storage. It has breezy windows that I can open up. Tim grills outside a ton and as long as it’s not raining we eat outside. I love our little kitchen. I think it works just great.”

Entertaining is clearly a big part of who you are. What’s it like for you to host get-togethers here?

“On any given day, it will be an open invitation. We’re just hanging out and anyone is welcome to swing by. Usually what we end up doing, which has been a shift for us in our “old days,” is starting our hangouts around 1:00 in the afternoon or earlier. Next thing you know, people are playing records, are too drunk, and it’s midnight. Instead of going out, we let it evolve here. We’ve had more people than you think gather in the winter or when it’s rainy and cozy in this little tiny spot.”

A Zen Oasis in LA with Minimalist Mediterranean Roots

You’ve Never Seen a Studio Apartment Bedroom Quite Like This