A Zen Oasis in LA with Minimalist Mediterranean Roots 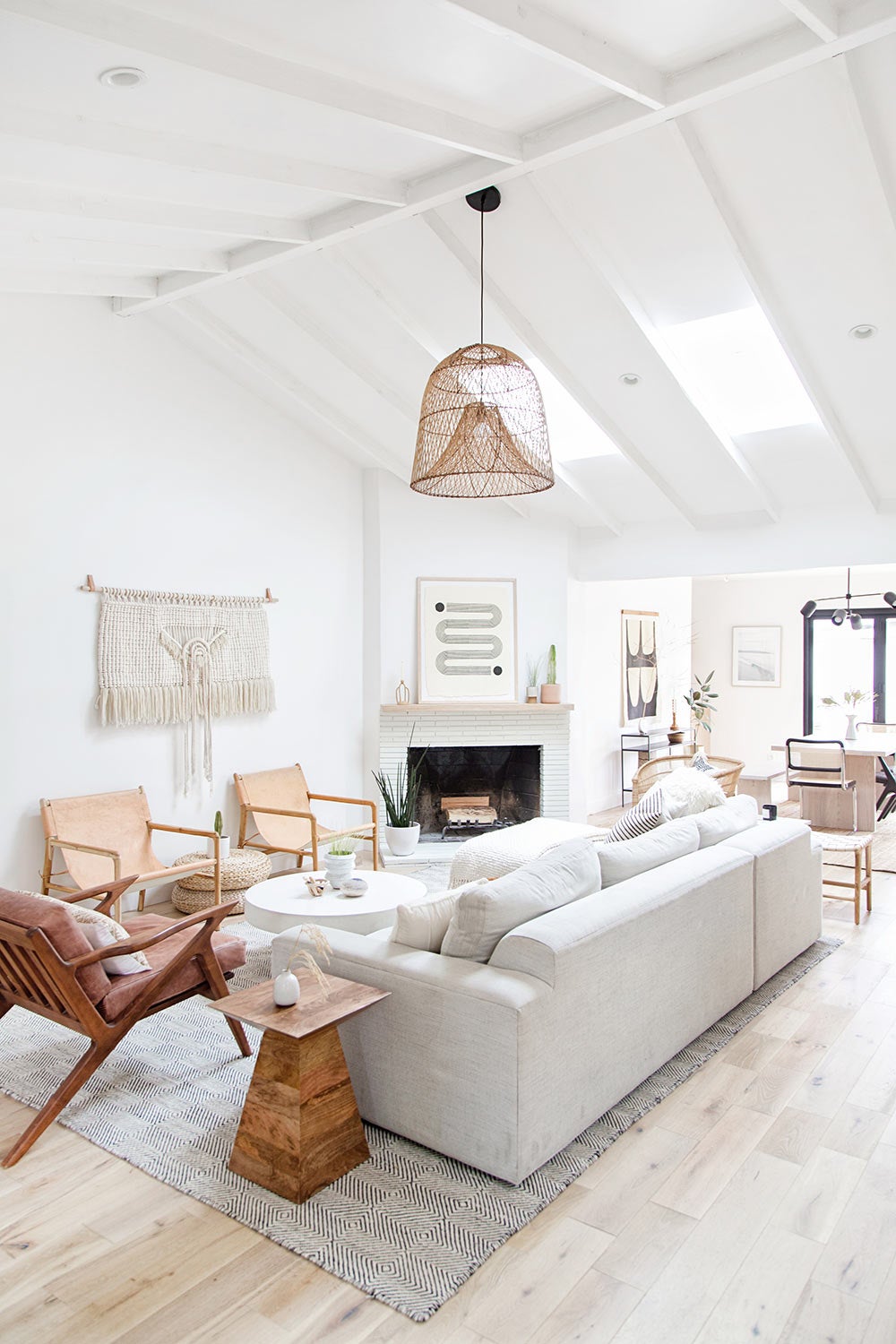 Amanda Dawbarn’s home may be in Playa Del Rey, California, but the inspiration for it lies halfway across the world, smack in the middle of the Mediterranean. “We have traveled a few times in the last five years to Italy and Greece,” says Dawbarn. Porto Heli, Rome, Lake Como, Florence, Puglia…the enviable locales she has checked off her travel hit list also lent themselves perfectly to all sorts of Mediterranean-inspired interiors. “We were so inspired by the aesthetics there. The stucco they use in Puglia; in Rome, how every hotel has the coolest tile you’ve ever seen. Travel was definitely the impetus.”

Dawbarn, who you may know as the founder of the uber-successful lifestyle blog 100 Layer Cake, bought the 1,750-square-foot home with the mentality of it being a fixer-upper. And despite this being her first interior design project ever (!!), you would never guess it, both due to the flawless final product and the sheer scope of this renovation. “We’ve pretty much touched every surface of the house since we moved in—it’s probably totally unrecognizable to the previous owner,” says Dawbarn.

First of all, they added an additional 200 square feet to make room for themselves and a baby—as if undertaking a gut reno isn’t stressful enough, Dawbarn was also pregnant for the duration of the project—and knocked out most of the ceilings. Gorgeous tall ceilings, many of which are vaulted, stand in their place. Dawbarn and her husband also redid the entire kitchen, knocked out the back of the house and added bi-fold doors to promote an indoor-outdoor feel, and painted everything a crisp white—a nod to their time in Europe.

Oh, and in a move that may seem counterintuitive to some outdoor space lovers, they removed the pool. Though now, with a roomy wooden deck and a charming little corner complete with a hot tub and recliners, it’s not as if the backyard is lacking anything. “I wanted to introduce a lot of light and a lot of space into the place,” says Dawbarn. No small feat, as the original 1952 ranch-style home was painted a retro peachy-pink hue, and starred yellowed old floors, a green kitchen, and dated appliances.

Being that the majority of this home is new—the couple added a master bedroom and bathroom, laundry room, a nursery, and a kids’ room—Dawbarn was presented with a blank slate. “I kind of have an eye for design, but 2D design is so different from interiors,” explains the graphic designer and blogger. “Some rules, like color and composition, still apply.”

Dawbarn calls her personal style a mixed bag: “I love minimalism, but I also love color and pattern. I love California craft and Japanese design. We live about a mile and a half from the beach, so we wanted to incorporate a relaxed feel, too. I also love a bit of mid-century,” she says of her admittedly broad source of inspiration, which including all previous descriptors is mainly rooted in her travels. “It was about figuring out how to work all those influences in together.”

Somehow, you see snippets of each and every one of those styles in the house. A subdued color palette circling around calming, neutral hues is textbook minimalist—yet, there are the occasional bursts of color (a natural-dyed blue blanket in the master, and orange and blue graphic shower curtain, and tons and tons of greenery) keeping it from feeling too one-note.

The clean lines and uncluttered zen that defines the Japanese design ethos is thanks to both the simplicity of the background and the abundance of storage (per Dawbarn, this was one of the additions she was most excited for) minimizing mess.

The beachy California influence comes through in the mix of textures that create a layered look almost veering into bohemian territory: Cool leather armchairs mix seamlessly with woven pendants and wicker baskets. This influence is also present in a more literal sense—Dawbarn consciously tried to incorporate the work of as many local LA artists into her space as possible. “I have a lot of artists that I like, and I try to mix what’s on the walls pretty intentionally,” she notes. Art and decor from makers and local brands like NikNik, Heather Levine, Block Shop, and Kalon feature in every room.

And as for the clearest example of Dawbarn’s Mediterranean influence, look to the bathrooms. “The whole master bathroom was inspired by our travels. In Greece, we stayed at the Amanzoe, and it was one of the best hotels we’ve ever stayed in—we had a big skylight in our bathroom in that hotel, so we always said that when we did a renovation we would put a skylight above our shower,” says Dawbarn.

Other elements—the gray plaster wall, reminiscent of the materials used in homes in Puglia, and the tile floor, an homage to the “funky and geometric and kind of colorful” tiling seen in Rome—further that vibe. It’s no wonder that the master bath is one of Dawbarn’s favorite rooms in the house. “It’s my retreat where I go to get away and take my baths—I have aromatherapy going on in there all the time and it’s almost like a spa,” she explains.

This careful, intentional approach to interior design is what makes every room in the house feel so special and personal. Take the open shelving in the kitchen, for example, which is largely more decorative than functional and is a decor statement in its own right, full of little vases and favored cookbooks. Or the kids’ spaces, which are both playful and timeless, full of high-quality furniture (the crib is a convertible one made by LA company Kalon) and pieces that will grow with her son. Every square inch in Dawbarn’s home is there on purpose, deliberately chosen to create an overall space that’s totally zen and calming. “Harmonious, peaceful, and cheerful,” says Dawbarn of the three words that best describe her home’s style. “It’s an oasis with a bit of whimsy to it.”