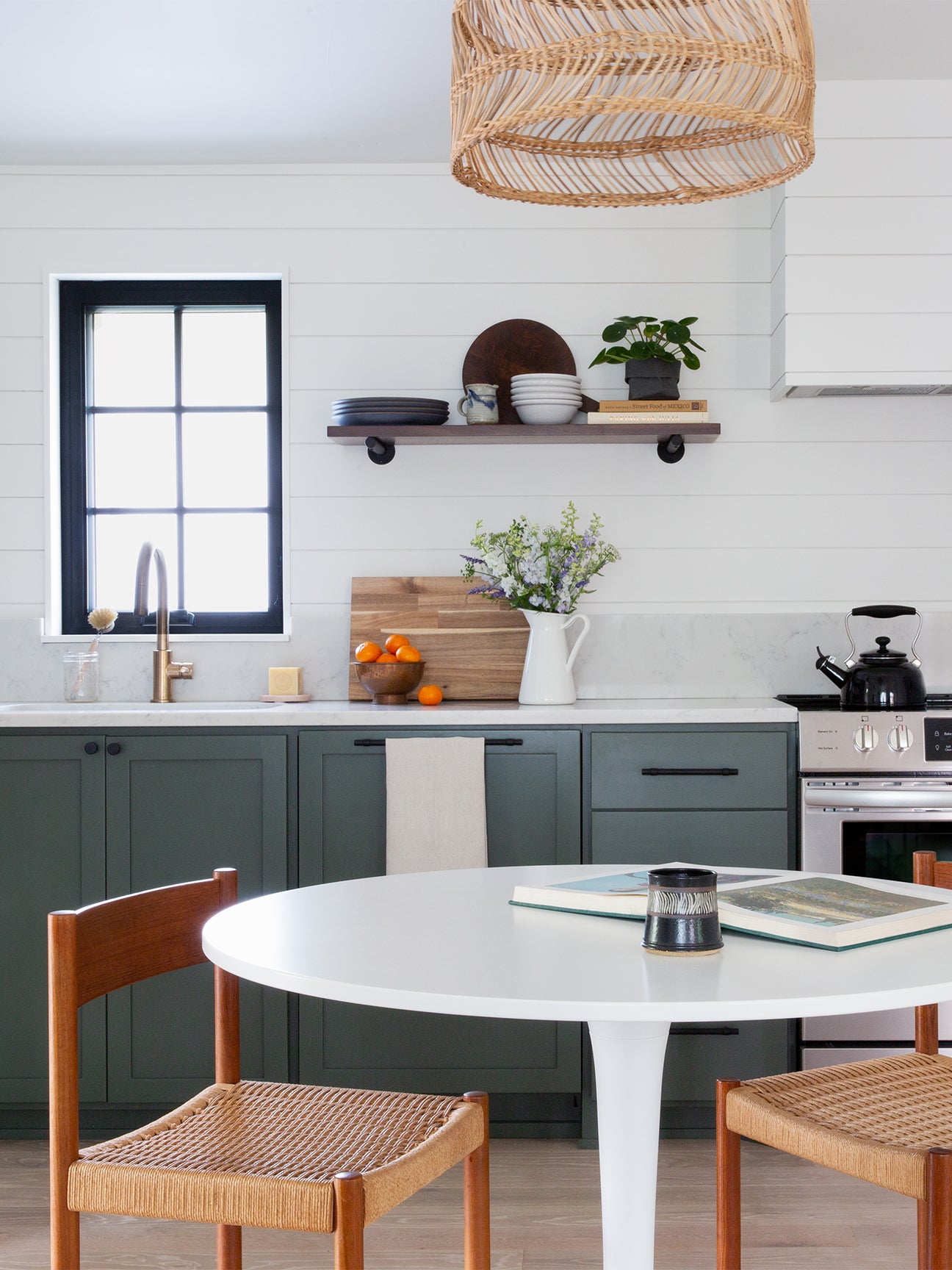 For graphic designer Lara Bobo and her contractor husband, Tim, nothing is quite as exciting as a home renovation project. Together, they form Bobo Workshop and flip homes in the quaint Texas Hill Country town of Fredericksburg. With each project, they flex their budgeting muscles and work their remodeling magic without spending a ton. So far, the recipe is working!

“If you want a good deal, you’re going to get something incredibly run-down,” says Lara. “The properties we bought, including this one, most people would have just pushed past.” But the couple was up for a challenge with their latest project, a one-bedroom, one-bathroom, 715-square-foot 1940s cottage. After taking it down to the studs, replacing the roofing, and adding a mudroom and exterior deck, they transformed this tiny space into an airy, livable home while spending under $100,000. Here’s how they did it.

The Bobos note that some people avoid small spaces, but it doesn’t bother them. “A lot of folks in our area will buy a lot with two smaller homes and tear them down to build a larger house,” says Lara. But for the couple, it’s all about taking the tiny house trend one step further and facing the challenges of how to design each space for optimal functionality.

For this particular project, they thought through everything someone would need. From the all-green office featuring a Turkish rug Lara bought on Etsy to the perfectly laid out living space, they know that less room doesn’t mean giving up what you want or need in a home.

Be Down to DIY

Saving money was hugely important to the Bobos, and while they did go over their initial $85,000 budget, they used cost-saving tips in every aspect of the home. For instance, they drew up their own blueprints and contracted the project themselves, saving a ton of money thanks to Tim’s construction background.

They also were lucky to connect with a carpenter who had an array of skills. “We found out our carpenter enjoyed building cabinetry in the evenings and had him build our bathroom vanity for a fraction of the cost,” says Lara. “Also, for the built-in shelves in the green study, we had them made out of Sheetrock instead of paying a ton for custom millwork.”

Get Thrifty With Furnishing Finds

The couple furnished the entire home for just under $7,000, focusing on both high-end and low-end pieces. The couch was the biggest splurge at $1,300, while the modern white chrome living room chair was a steal at $75. “I found it at a local thrift store and knew I wanted to try it in that room,” says Lara.

The kitchen’s biggest focal point is the European light from Trouva, a website that collects from boutiques all around Europe and, Lara notes, has great sales. In the master bedroom, she went for another Etsy hack:  a soft rug upholstering a handmade headboard. “The rug has a lot of texture and was overdyed, so there are subtle pink stripes on the side that add a lot more character than a normal headboard would have,” she says. In the bathroom, the Bobos saved big by hitting up a tile sale, purchasing the black hexagonal tile from Clé at 50 percent off (with free shipping).

For the Bobos, the carpentry and plumbing ended up being quite the headache. When Tim did his first inspection of the house, he saw that the PVC septic lines were in good shape and had been recently updated, but something was amiss. The lines were shot.

“Creating new buried septic lines to the street was an unforeseen $4,000 expense,” he says. “I highly recommend spending a little money up front to have professionals with the right equipment check out things like the septic and electrical before budgeting for your house project.” It just goes to show that with some resourcefulness and planning, you can achieve a whole lot with very little.

See more homes we love: Inside Jewelry Designer Jessica Honegger’s Colorful Austin Home This Aussie Designer’s Home Is the Result of Not One But Two Renos I Built My Dream Home in Bali Totally From Scratch