Here's how you maximize an awkward room layout like a designer. 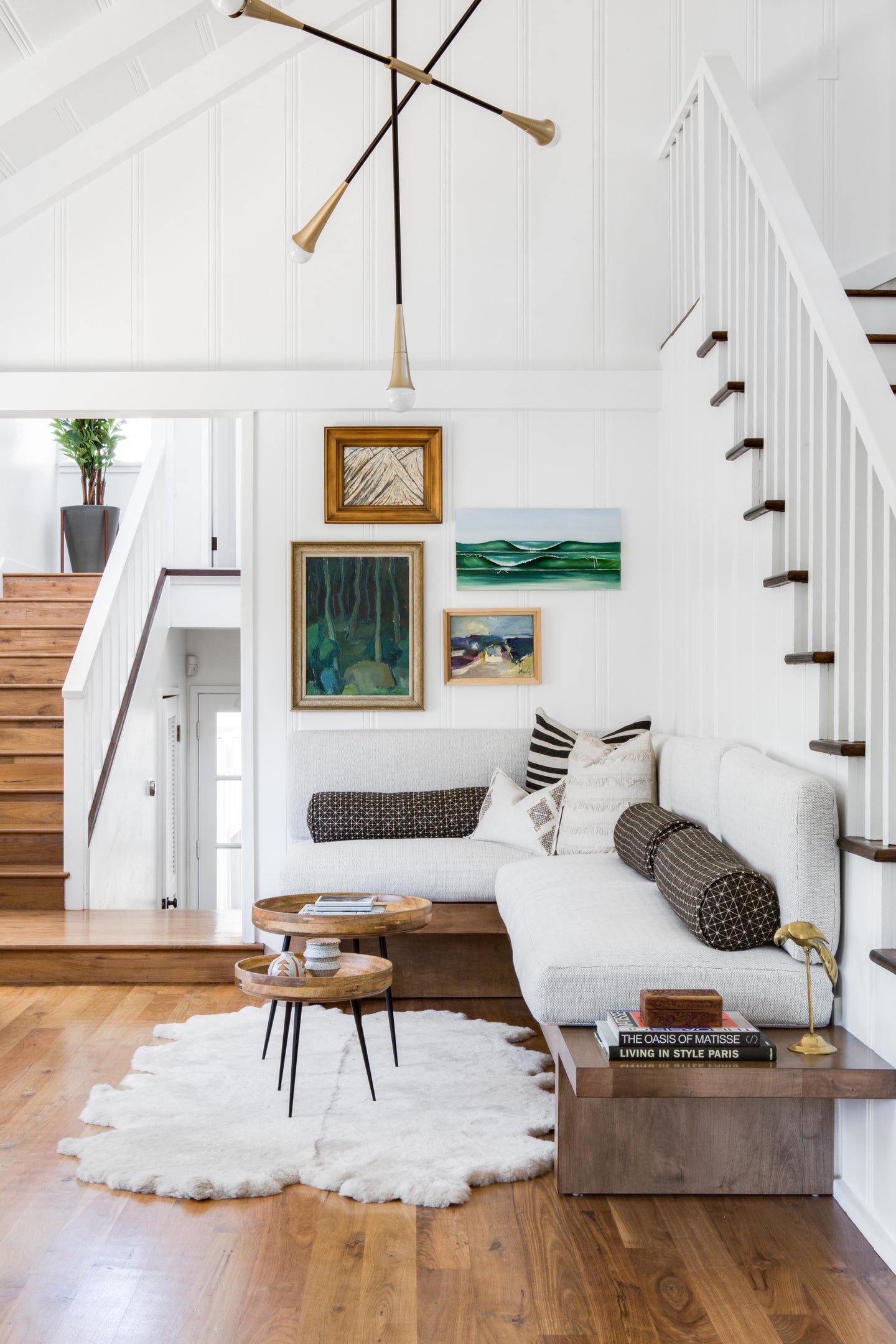 There’s more to a great living room than first meets the eye. Just ask Jen Samson. The Orange County-based designer recently completed not one, but three stunning shared living spaces for a young family, situated mere blocks away from the ocean on one of Laguna Beach’s most iconic streets. What was once a tiny beach cottage is now a breezy retreat that is equal parts stylish and indestructible.

“Part of the goal was to design a home that had really interesting pieces and was very livable. This home is for a family of five—plus a dog! They have three boys all under the age of 11. It’s family-filled and bustling with activity, so we had to take all of that into account when we were designing the home,” says the designer.

Form and function is a marriage Samson knows well. Before getting her start in interiors, the designer first had her hands in fashion, creating lifestyle programming for E! and the Style Network and heading up West Coast PR for renowned luxury fashion house, Salvatore Ferragamo. Though her curated sense of style makes its debut by way of sophisticated textures and neutral tones, Samson’s understanding of functionality is what really shines. Built-in benches, double duty nooks, and two-in-one storage solutions maximize every square inch of this kid-approved beach home.

Before jumping into upholstery and light fixture decisions, Samson first crafted a checklist of basic cosmetic upgrades.  “Right off the bat, there were a few things we needed to address—like the mismatched woods in the living room,” she shares. Masked in a floor-to-ceiling, naturally stained shiplap, the fireplace wall in the main sitting room was certainly suitable in its own shabby-chic way, but didn’t mesh well with the original beadboard that covered the rest of the room.

“While shiplap is a very trendy design element in farmhouse-style homes right now, it definitely didn’t work. It was very nostalgic, but very dated. We had to reinvent that entire wall,” adds Samson. Instead, she opted for a pared-down, whitewashed look and new tiling for the fireplace area.

With the shiplap officially out of the picture, the designer faced another unique challenge: flow. Given the room’s long and rectangular shape, she initially struggled to find a functioning layout for the space that felt cohesive. By creating two unique, singular sitting areas, Samson maximized seating options without disrupting the floor plan.

“There was a lot of opportunity to get creative with the layout. That being said, it took some work. Like I said, they’re a big family, and they love to entertain; they wanted to have a lot of areas to hang out and have friends over,” says the designer. “That’s how we came to do the built-in sofa. It basically turned what otherwise would have been an unusable area into something really artful and cozy. It all looks like one space without feeling like a forced, narrow living room where all the seats face one another.”

Across from the custom bench, a carved African drum stool separates a pair of cane chairs sourced from Bali. “I would say that is a favorite spot of mine,” Samson tells us. “It sits in the most beautiful, sun-drenched part of the living room.”

The olive green Zak & Fox fabric Samson chose for the seats served as inspiration for the other color moments in the room—namely the miniature gallery wall of vintage oil paintings that presides over the bench.

Next up, the front entryway room: A space which now beautifully blurs the lines between a bonus reading nook and a mudroom. With ease and storage top of mind, Samson opted for a second built-in corner bench, this time swathed in a luxe-looking faux leather.

“That space needed to serve two purposes. First, it had to look beautiful—it’s their entryway. But also, it had to be highly functional and serve as a mudroom of sorts. Between the three boys, the dog… there’s a ton of stuff, all of which needed to be kept tidy in its own area,” says Samson.

Cleverly hidden out of view, the designer added a floating shelf underneath one side of the seat where the family’s littlest inhabitants can stash their flip flops, cleats, and other daily gear. “There’s a lot of feet that go in and out of there!” she laughs. “We had to find a way to keep all of that in there but tuck it away as neatly as possible.”

Without compromising a strong design statement (peep the rich dark walls, leather accents, and graphic tile), no visitor will ever have to feel guilty for kicking off their muddy shoes.

The less formal of the two living rooms, the den takes a darker turn with rich leather accents, deep blues, and hints of gray—much like the entry. Picking the bold hue for the room was easy; Farrow and Ball’s “Hague Blue” was a natural choice. Painting the space, on the other hand, proved to be a surprisingly tedious challenge.

“At first, that room had the original walls, which were textured and white. We wanted to go dark and make it really cozy so we painted it that beautiful dark shade of blue and did it in a flat paint, but as soon as we painted it in a flat paint, it started showing scuffs immediately—every touch, every time the kids climbed up the ladder, it was marking up the wall,” explains Samson.

For round two, the client opted for a coat with more of a sheen. Yet, as the story often goes with highly reflective paints, the glossiness was bound to call attention to any textured flaws. “Between the two skylights, the wall texture, and the sheen of the paint, it just wasn’t working. In the end, we went back to square one with smooth coated walls and a next-to-flat sheen with just the right amount of durability.”

Complete with a secret, lofted hideout (and now the perfect coat of paint!), the inviting hangout is the family’s go-to spot for game night.