Yes, Winter Sangria Is a Thing—These Recipes Will Wow a Holiday Crowd 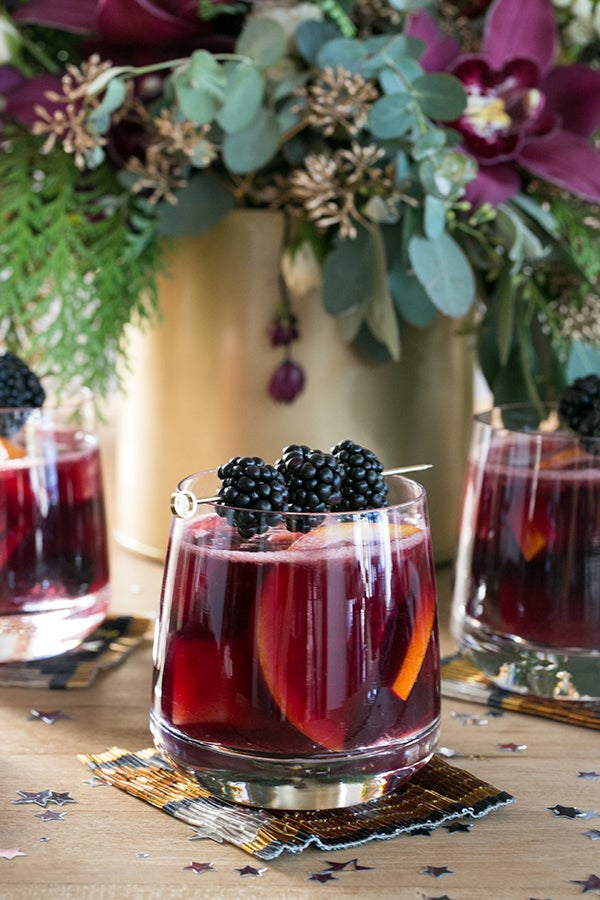 courtesy of sugar and charm

Late summer nights and freshly plated tapas are the first two things that come to mind when the wannabe bartender in your friend group tells you they’re making sangria and you should come over. When Spain gifted the world its famous concoction, a punch which traditionally consists of red wine and chopped fruit on ice, we adopted it as a warm-weather drink. But what if we told you we had the seasons all wrong?

In case you missed it, December 20 happened to be National Sangria Day—an unusual date for a cocktail that has become ubiquitous with casual poolside parties and glowy post-vacation tans. When mixed up with the right spices, in-season sweets, and a splash of a whiskey or brandy, however, this crisp and cooling drink is one you’ll want to enjoy on an even chillier day.

For the holiday crowd and beyond, the nine wintry sangria recipes ahead promise to blow partygoers away with an unexpected play on the seasons.

Made from a mix of Malbec and Prosecco, this celebratory batch is equal parts tart and fizzy. Cranberries, persimmon, and grapefruit serve as the fruity makeup for Cooking Therapy’s rich recipe—a concoction that was actually inspired by an episode of Queer Eye.

Fall might be officially over, but that doesn’t mean you can’t take your apple cider obsession with you once the snow starts to fall. Apples only get better in sangria, and How Sweet Eats pinot grigio–based remedy picks up on the fruit’s crisp and mildly sweet profile with ginger brandy, apple cider, and pears.

Whether you actually live in the Arctic Tundra or it only feels like you do, this sweet red wine rendition with Granny Smith apples, thinly sliced clementines, sparkling cran-apple cider, and pomegranate arils will convince you the blizzard outside isn’t so bad. Baked New England’s recipe calls for a garnish of rosemary for a festive, finishing touch.

This rich, dark mix made from a blend of red wine and topped with dark berries, orange, and pineapple is best enjoyed after the clock strikes midnight. While the pitcher is best left up to the host, who should blend the sangria and let it sit for at least three to four hours before serving, a fun garnish station lets guests get in on the fun. Get the how-to on Sugar and Charm.

When you can’t decide between a crisp glass of bubbly or a fruity surprise, ring in the New Year with both. This vibrant, fizzy batch by Beth Cakes calls for a bottle of moscato, a bottle of sweet champagne, grapefruit juice, and Meyer lemons for garnish. If you don’t get around to serving on NYE, save this tart concoction for your morning-after brunch.

While this potent potion was designed with All Hallow’s Eve in mind, its autumnal-approved flavors will feel relevant all season long. Bourbon serves as the base for Free People’s spellbinding recipe, which finishes off with handy cinnamon sticks as stirrers.

This make-ahead batch by Simply Recipes consists of pear nectar, white wine (either pinot grigio or sauvignon blanc), diced pears, and ginger beer. While this mix tends toward the lighter side, add in traditional winter spices like cinnamon, anise, and clover for a holiday touch. Tip: Pears are a great substitute for apples if you had one too many slices of pie the night before.

This straightforward melody might just be the simplest of the group to whip up on the fly. Apple cider, white wine, bourbon, and apple slices are all you need to pull off this crowd-pleasing libation. Cassy Garcia of Fed and Fit suggests letting the alcohol and cider marinate with the fruit for as long as possible if you really want it to have that quintessential holiday kick.

Bookmark this boozy remedy for later in the season, when spring is just on the horizon. While Sugar and Charm’s mashup of apples, kiwis, pears, and grapes was designed to bring out the colors appropriate for a St. Patrick’s Day themed get-together, this breezy batch will certainly feel timely on a cold January morning.

11 Large Batch Cocktail Recipes to Satisfy All Your Party Needs

This Genius Quiz Will Reveal Your Perfect Winter Cocktail