There's so much to look forward to. 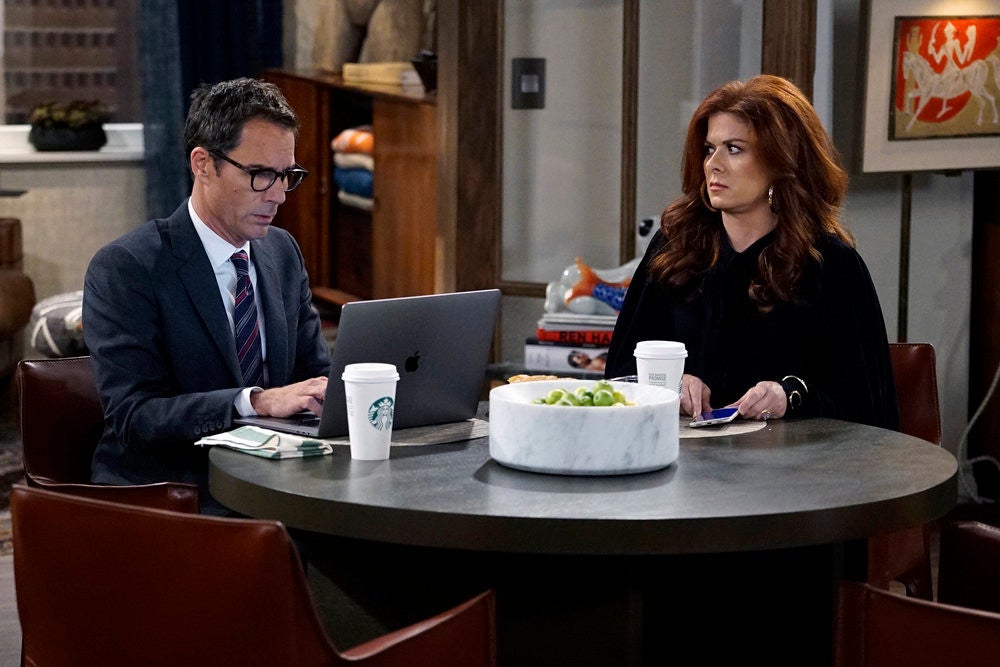 “Remember this?” Eric McCormack asks Debra Messing, gesturing grandly at the set of Will Truman’s apartment in NBC’s teaser for the 2017 Will & Grace revival—which premieres on Thursday, September 28. Messing’s eyes fill with tears as she takes in the same table, same fake TV, and same couch from 11 years ago.

But of course, that’s all just for the promo—in the actual revival, production designer Glenda Rovello and set decorator Peter Gurski gave Will’s iconic Upper West Side two-bedroom the modern upgrade it deserves.

Both designers are alums of the original series: Rovello’s been the Will & Grace production designer since the very first season in 1998, and Gurski worked closely with then-set decorator Melinda Ritz on the first three seasons. Both are thrilled to be back, in order to take on the challenge of updating the Will & Grace set under the guidance of showrunner Max Mutchnick.

Domino spoke with both Rovello and Gurski about preserving the essence of Will’s 1990s apartment, while still giving it a modern makeover with some high-end, designer furniture.

Tell me about working on the original Will & Grace production design.

: We were all young at the time. I think Max gave me his address and said, ‘Go look in the window of my house. I really like design, so just go see what my aesthetic is.’ He wasn’t even home—he really wanted me to just look in the window of his apartment! We idealized what a fantastic apartment a successful New York attorney could have, but he was still in his 30s, so we didn’t want it to be as established-looking.

What was your favorite piece in Will’s original apartment?

: The most famous one was the painting that’s just upstage of the fireplace. We called it Ricky Ricardo, but it’s not actually Ricky Ricardo. It seemed like I used to get inquiries once a year—back then, Googling wasn’t so easy—and somehow, fans would find me and ask if they could buy that painting. But it would never be possible. The one that we have on the set now is a copy.

In terms of my favorite piece, I really love the grass easel—it’s directly upstage of the sofa. Ever since we’ve had it, we’ve had this tile piece of art on it that looks like Don Quixote. I’ve always liked that aesthetically, not necessarily for the story itself.

What got updated in Will’s apartment, and what didn’t get updated?

: We decided we wanted to update everything. Some of the really iconic pieces—like the ornate, antique secretary that’s on the back wall of Will’s apartment—we kept. The dining room table—which is really the perfect size for that space—we kept and refinished it.

: If I go from right to left—the fireplace has had a remodel; it went from white to a dark walnut. Maya Romanoff was able to produce a veneer wallpaper that’s true veneer. In the fireplace mantel, we used Ann Sacks black marble tile.

Holly Hunt found us a fabulous sofa that we bought out of the showroom. Rose Tarlow was able to get us this coffee table that Max really fell in love with a long time ago. It really is beautiful, and just like our old coffee table: round, same dark brown, but it’s better. Will invested in that. Will would have an Hermés bench, so Max made it happen. We now have a spectacular Hermés bench, and we’re so happy to have it.

There’s the partition wall that separates the dining room from the kitchen. [The original color] was based on a little bowl I found. It was an orange Japanese ceramic. I had the painters copy it 18 years ago, so that orange was always really identifiable. When I was shopping for wall coverings, I saw that Maya Romanoff again made a metal textile. It’s woven, and it was the perfect color orange.

Will got a new kitchen, because he would have. He got a sub-zero wine refrigerator.

: When it came to lighting, I partnered with Fuse Lighting in Los Angeles. They created a custom Will sconce for us. Originally, there had been an antique iron light bracket with a globe on it. What we developed with Fuse was more of a sconce lighting with a tail, and then the globe was a metal cage that they blew glass into. It’s a totally custom fixture that’s evocative of the old piece, but looks forward.

We have a Joseph Jeup sofa that I found through Holly Hunt. He was a fan of the show, so he helped us out with the price. It was a beautiful navy mohair, which unfortunately we had to change out to cotton velvet, because one of the actors has an allergy. Also of note—we have a beautiful lens table from Holly Hunt that they’re loaning to us.

We worked with Arteriors for some of the other furnishings—for example, there’s a beautiful lamp that’s on the credenza in the dining room. The credenza itself is a beautiful, solid walnut piece from Organic Modernism, but I actually had to modify it a tiny bit. In the original, [Will] had a copper bar cart. I found something on 1stdibs: It was an Italian goatskin cart, with almost a swan design—just completely out there. I’m so happy with that. It’s my favorite whimsical piece.

We ended up using Cassina dining room chairs. I was so lucky to get four Cassina cab chairs for his dining room—everything is so perfectly balanced this time around.

And concerning the art, through Max’s husband Erik Hyman—with the help of the Herb Ritts Foundation—we have a Herb Ritts authorized piece that now sits on the dining room credenza against the wall, between the kitchen and dining area.

Yes, Will always has these sophisticated art pieces in his apartment—how did you choose the artworks?

I work with the Sears Peyton Gallery and John Wolf, and we chose New York artists for artwork that’s in Grace’s office and Will’s apartment. There’s a legacy piece—a condom and a diaphragm dancing together—that was reframed and repositioned. That was an iconic piece that was saved.

I introduced more and better modern art: I have a Brodsky in there on the back wall. They’re real New York artists, working in New York, and they’re a certain price point. We chose contemporary art in terms of the artist, the composition, the color—it really was a process where once the space started taking shape, the right artwork speaks to you.

What’s the most expensive prop on the set?

: It’s the Hermés bench, but just by a hair over the Rose Tarlow coffee table. I think the bench is now $20,000, and the coffee table is at $13,000. And in Grace’s office, we have a vintage Biedermeier that we don’t own, we’re borrowing it. I’m sure it exceeds those amounts, but I don’t know how much that piece would be.

How did Grace’s profession as an interior designer on the show affect how you designed her spaces?

: When [Grace] did have an apartment, she never finished it. That was to her character, and that came from our executive producers. We had one episode where there was some kind of conflict between Grace and Will where she decided to have a dinner party, and she called it a ‘picnic.’

They invited their best friends Rob, Ellen, and Karen over, and because Grace didn’t have any furniture, she just throws down a tablecloth and people had to sit on boxes—that was Grace’s character. Although, when she lived with Leo, then it was done—because we kind of thought Leo could get it together and have a sofa.

: I think we’re always thinking of that. From the beginning, that was always in our mind, because we assumed that Grace would be helping Will with all the upgrades in his apartment. So while making choices, we decided we almost owed it to the fans to do a super upgrade.

I didn’t have to get a Joseph Jeup sofa—we could have put in anything there. But we felt we owed it to the fans to show that [Will’s] status had gone up, and [Grace] had become a bigger designer. These all had to be informed choices in order to create a beautiful environment for her dear friend Will.

Did the writers ever come to you with design questions, because they were trying to write about an interior designer?

: I think that happened just one time, and it wasn’t our executive producer. It was another writer, and it was very early on. She just said she wanted some ‘fancy design words.’ [Laughs.] It wasn’t that challenging.

In your professional designer opinion, do you think that Grace is a talented interior designer?

: I think Grace is phenomenal with color. She’s fearless with color and design. There is an energy and spirit with her choices, and you’ll see it during the season. She’s designed Karen’s bathroom. She’ll make a choice that will make you stop, look, and think about it. For Will, [he makes] inarguable choices—they’re always handsome, they’re always beautiful, they’re always tasteful—versus Grace will have choices with a lot more energy.

: Yes, because we’re working hard to make her one. And I love the choices we made in her design studio. We have a beautiful Biedermeier cabinet that’s on loan, also from Max, who’s a bit of a design aficionado himself. It’s a cabinet we’d never be able to afford on our own.

Would you let her design your home?

: Absolutely. Unequivocally, in a heartbeat.

What are you most looking forward to have fans see about the new, updated set?

: I want them to see the apartment and the office, and recognize them right away. I want them to say, ‘Look, they changed that, isn’t that great?’ I hope they’ll support the changes we’ve made—that we evolved it in a good way—and think we made good choices for our characters.