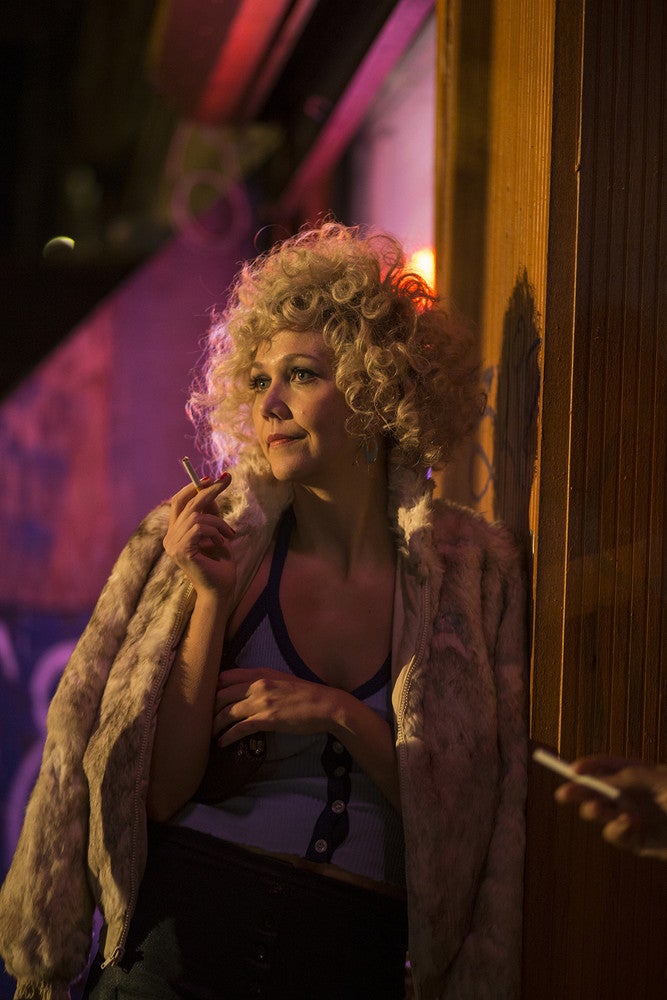 The hotly anticipated new series The Deuce, premiering this Sunday on HBO, has already garnered attention thanks to its stellar casting—which includes Domino cover star Maggie Gyllenhaal, James Franco, Zoe Kazan, and up-and-comer Emily Meade—but also due to the show’s really-real retelling of 42nd Street’s hustlers. Directed by David Simon (of Treme and The Wire fame), the drama centers around the sex industry in 1970s New York City. To recreate the era in all its gritty glory, a laser-strong vision was required.
“I love the challenge of stepping outside of contemporary set design,” says Elizabeth Mickle, who tapped into her more naturalistic, indie set design aesthetic—as seen in Drive, Collateral Beauty, and Half Nelson—to recreate the era’s sleazier, seedier street life.
The show was also her first foray into television. “I lived in New York for 18 years, so to get to explore what the city was like 50 years ago was an especially exciting opportunity.” Mickle scouted over thirty locations throughout Manhattan, Brooklyn, and Queens before landing on the Bronx on Amsterdam avenue between 163rd and 165th streets. Like Times Square, that stretch of the city  features six-lane traffic streets and twenty-inch sidewalks.

The acclaimed set designer immediately tapped into her more naturalistic, indie-side—and indicative of her work on films including Drive, Collateral Beauty, and Half Nelson—to help guide her in  recreating sex in the 70s. And in a believable and fashionable way, at that!

Mickle always begins by a close script-read, and shortly thereafter, she’s onto mood-boarding. To capture what the 70s would look like through The Deuce’s lense, she heavily relied on Klute, Midnight Cowboy, and The Panic in Needle Park to the photography of Jean-Pierre Laffont and just about every early Martin Scorsese film. “It’s a collaboration in the biggest sense,” says Mickle who was behind the concepts of the show’s set designs for roughly eleven months. “From carpet swatches to street-style photographs of street walkers, it’s important to make sure that everyone’s ideas and what they  have in mind is first accounted for; only then do we get into fabric swatches and color palettes.”

The overarching goal was to capture an essence, tone, and authenticity of the time—think: Tin Pan Alley, by-the-hour hotel rooms, the apartment of Gyllenhaal’s character Eileen “Candy” Merrell, and of course Times Square—rather than merely outfitting everything, a process that took her just under a year to concept. “I pulled furniture and design elements from the ’30s,  ’40s, and even the ’50s,” says Mickle, who sourced most of the show’s harder-to-find seventies-specific needs, like parking meters and storefront signage, from Craigslist, Ebay, and 1st Dibs.

“It was important to create something that was both subtle and layered,” explains Mickle. And that she did.

Next up for Mickle? She’s just moved to upstate New York (an antique-addicts heaven) and she and her fiancee are renovating their new country home.