The actress shares the rich inspirations behind her fearless new role in HBO’s The Deuce. 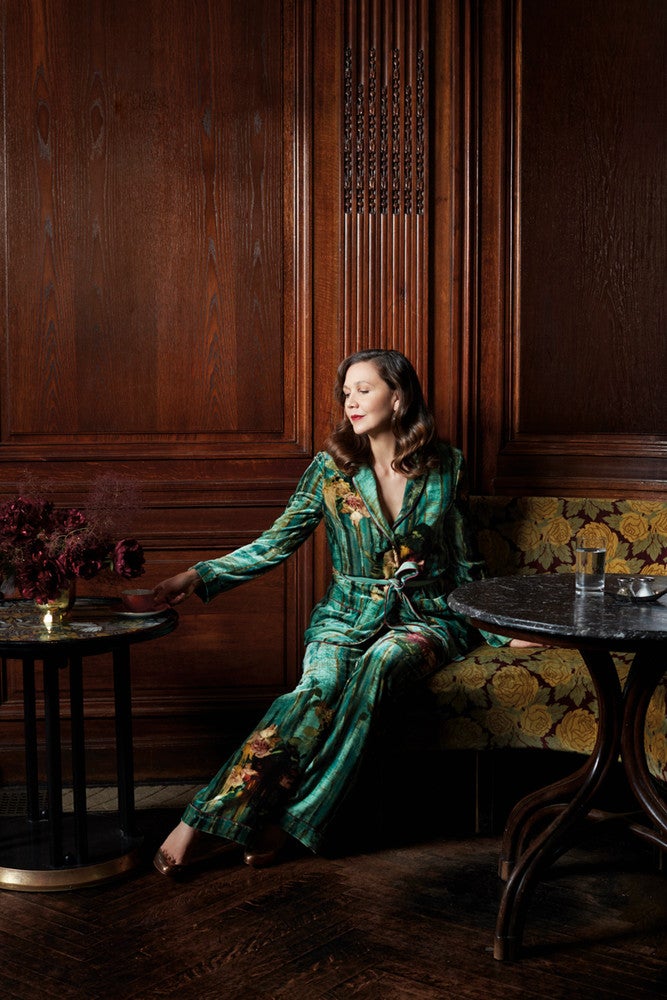 Creative chameleon Maggie Gyllenhaal takes on a game-changing role in HBO’s The Deuce, premiering Sunday, September 10, that’s equal parts grit and grace. At one of the actress’s favorite haunts, the Neue Galerie New York, she shares a rich arsenal of inspirations as far-reaching as her talent.

It was opening night at the prestigious Berlin International Film Festival earlier this year, and Maggie Gyllenhaal was running late. “I put on this hot pink Gucci dress with a huge purple flower at the neck,” she says. “I remember looking in the mirror and the 14-year-old part of me was like, ‘You can’t wear this, it’s insane!’ I had to take a breath and say, ‘No, actually, you’re 39. You like this dress. Keep it on.’ It’s one of my favorite things that I’ve ever worn.”

The actress knows all about risk and reward. She brings this same take-no-prisoners attitude to her richly varied career, which includes an Oscar nomination for the countrified musical Crazy Heart opposite Jeff Bridges and a Golden Globe win for the BBC miniseries The Honourable Woman.

She fully embodies the role in wild blonde curls and a rabbit fur coat. “I want everyone I play  to have a personal style. But they all look totally different,” explains Gyllenhaal. “I wanted Candy to be like cotton candy. I wanted to be yummy. I wanted to be soft. That coat felt like her.”

Preparation for the part began two years ago in earnest and hit fever pitch last summer. Gyllenhaal and her husband, actor Peter Sarsgaard, live in a brownstone in Park Slope, Brooklyn, but he took their two daughters to the couple’s country house so she could focus.

In fact, Gyllenhaal wouldn’t sign on to the project unless she could also be a producer. “I’d read the first three scripts,” she recalls. “I really liked them. I was compelled by Candy. But I can’t play a prostitute without a guarantee that what we’re going to say is something I can get behind. I knew my body would be required for this part. I also wanted my mind to be used. My agents, my managers, my friends—they said, ‘You’re never going to get a producing credit. That’s really ballsy that you asked.’ But HBO came back and they gave it to me.”

The story The Deuce tells is ultimately a thrilling, dark exploration of female empowerment. And those themes, says Gyllenhaal, who uses social media as a megaphone for her support of women’s rights, have only taken on a deeper significance: “We’re talking about sexual politics in 1971. But we’re going to use that as a way of considering ourselves today. It’s easier to look at it with a little distance.” She adds, “It’s the perfect time to have a piece about women and sex and power and money.”

Here, Gyllenhaal talks us through her many inspirations for The Deuce. Clockwise from top left:

My Brilliant Friend: Neapolitan Novels, Barnes and Noble, Book One from $10.45

“I read the news obsessively. And I read tons of fiction. I’m really into Elena Ferrante. Her Neapolitan novels are so starkly honest in their search for truth about human experiences. Even though the characters’ circumstances are very different from mine, I relate to the darkness and the light in what she says.”

“My girlfriend and I gave each other this poster as a gift from the Neue bookshop. It’s an incredible image of a woman [dancer and actress Anita Berber] with this lion’s mane of hair who is just clearly worth paying attention to.”

Self-Portrait With Arm Twisted Above Head, 1910, by Egon Schiele

“The Neue has this huge collection of Gustav Klimt and Egon Schiele, who used to draw portraits in white, orange, and black on this beautiful brown paper. I wallpapered my living room with craft paper to make it feel like one of his drawings.” Private Collection, courtesy of Neue Galerie (Photo courtesy of Hulya Kolabas for Neue Galerie)

“Sophie Buhai is a friend and makes silver jewelry that looks like Georgia O’Keeffe would have worn it.”

“I love the way it feels at De Maria. The restaurant’s walls are like pink plaster. It’s as if you’re in a church in Santa Fe, New Mexico. There’s a high window that the sun shines through…” (Photo courtesy of Nicole Franzen)

The Ballad of Sexual Dependency by Nan Goldin

“I went to Nan Goldin’s The Ballad of Sexual Dependency at the Museum of Modern Art earlier this year. It was a slideshow where you sat in the dark for 45 minutes with a mixtape playing. I just looked at these people in New York who reminded me of Candy. They live in a somewhat separate world. They have different touchstones, they have different style. I was really inspired by that.” (Photo courtesy of Aperture)

“All the wild, beautiful Gucci dresses I’m seeing around are so incredible.”

This fall, Gyllenhaal is preparing to shoot The Kindergarten Teacher. “It’s a thriller about a woman who is a teacher and a poet. She gets obsessed with this child in her class and starts to think he’s a poetic genius.” The moody black-and-white films of Swedish director Ingmar Bergman were an influence, Gyllenhaal says, adding: “If we’re lucky, I hope it feels like we’ve been influenced by him.”